Believe or not, it is one of the easiest way to backup and restore system settings with a just single command.

To backup your current Linux desktop settings, all you have to do is:

The above command will save all customization and tweaks you made in your system, including the pinned applications in the Dock or Unity launcher, desktop panel applets, desktop indicators, your system fonts, GTK themes, Icon themes, monitor resolution, keyboard shortcuts, window button placement, menu and launcher behaviour etc., in a text file named ostechnix-desktop.

Please note that this command will only backup the system settings. It won’t save settings of other applications that doesn’t use dconf. Also, it won’t backup your personal data either.

You can view this file using any text editors or cat command.

Here is my Ubuntu 18.04 desktop settings: 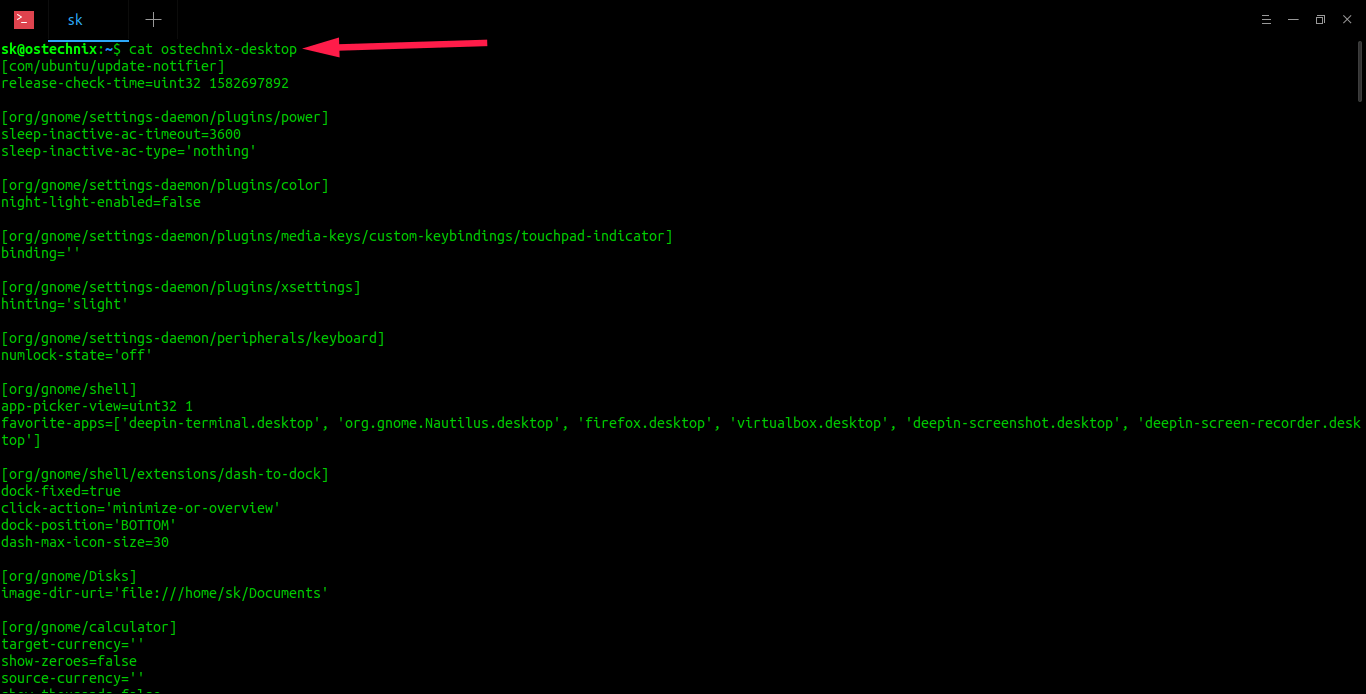 Now reset your desktop settings to the factory defaults with command:

After running the above command, your Linux desktop will turn into the old state when you installed it in the first time. Don't panic! Your personal data and installed applications will still be intact.

To restore the System settings, simply do:

Have a look at the following visual demo:

Keep the backup file in a safe place to use it later after reinstalling your Linux desktop. You can also use the same backup to multiple systems that runs the same OS version with same set of applications. For example if you have another Ubuntu 18.04 GNOME desktop, you can use this same file (i.e. ostechnix-desktop) to load the same settings as in your current system.

It is also possible to backup and restore settings for specific desktop environments like GNOME, MATE, Cinnamon etc.

Backup and restore GNOME-specific settings only

For example, to backup and restore settings related to GNOME shell, the command would be:

Make sure you have mention the correct path of the DE if you multiple DEs on your system.

You can even backup more specific settings like desktop or window manager.

Backup and restore MATE-specific settings only

Backup and restore settings of CINNAMON desktop only

Check If Your Domain Is Affected By Letsencrypt CAA Rechecking Bug

Automatically Optimize CPU Speed And Power With Auto-cpufreq In Linux

there was no reference to backing up KDE Desktop

As far as I know, KDE doesn’t use dconf. So this tutorial doesn’t help for KDE users. May be you can find the settings saved in .kde/share/config/kioslaverc. I don’t have a KDE system now, so I can’t confirm.

I LOST THE BACKED FILE (localhost.localdomain.desktop , fedora 31) so i wasn’t able to restore my desktop configuration

For KDE configs, check this out:
https://github.com/shalva97/kde-configuration-files

How To Disable Built-in Webcam In Linux

How To Check Weather Details From Command...