Browsh – A Modern Text Browser That Supports Graphics And Video

Browsh is a modern, text browser that supports graphics including video. Yes, you read that right! It supports HTML5, CSS3, JavaScript, photos, WebGL content and of course it supports video as well. Technically speaking, it is not much of a browser, but some kind of terminal front-end of browser. It uses headless Firefox to render the web page and then converts it to ASCII art. According to the developer, Browsh significantly reduces the bandwidth and increases the browsing speed. Another cool feature of browsh is you can ssh from, for example an old laptop, to a regular computer where you have Browsh installed, and browse HTML5 webpages without much lag. Browsh is free, open source and cross-platform.

Browsh uses headless Firefox, so you must have Firefox version 57 or later in your system.

Browsh is available in AUR, so you can install it using any AUR helpers.

For other Linux distributions, download the binaries from releases page and manually install it.

A Docker image is also available. Install Docker as described in the following links.

Once Docker installed, you can run Browsh using command: 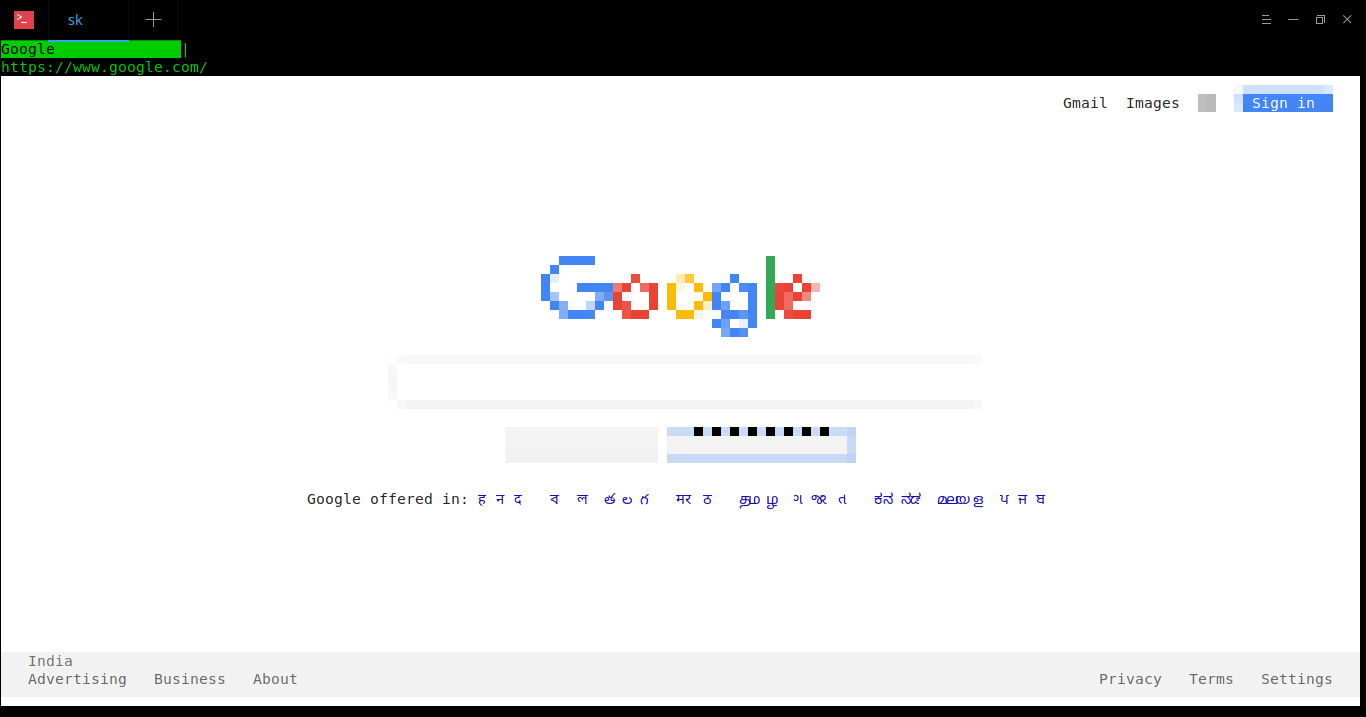 Browsh can render anything that Firefox can. So, you can browse through any websites.

Here is how OSTechNix blog looks in Browsh. 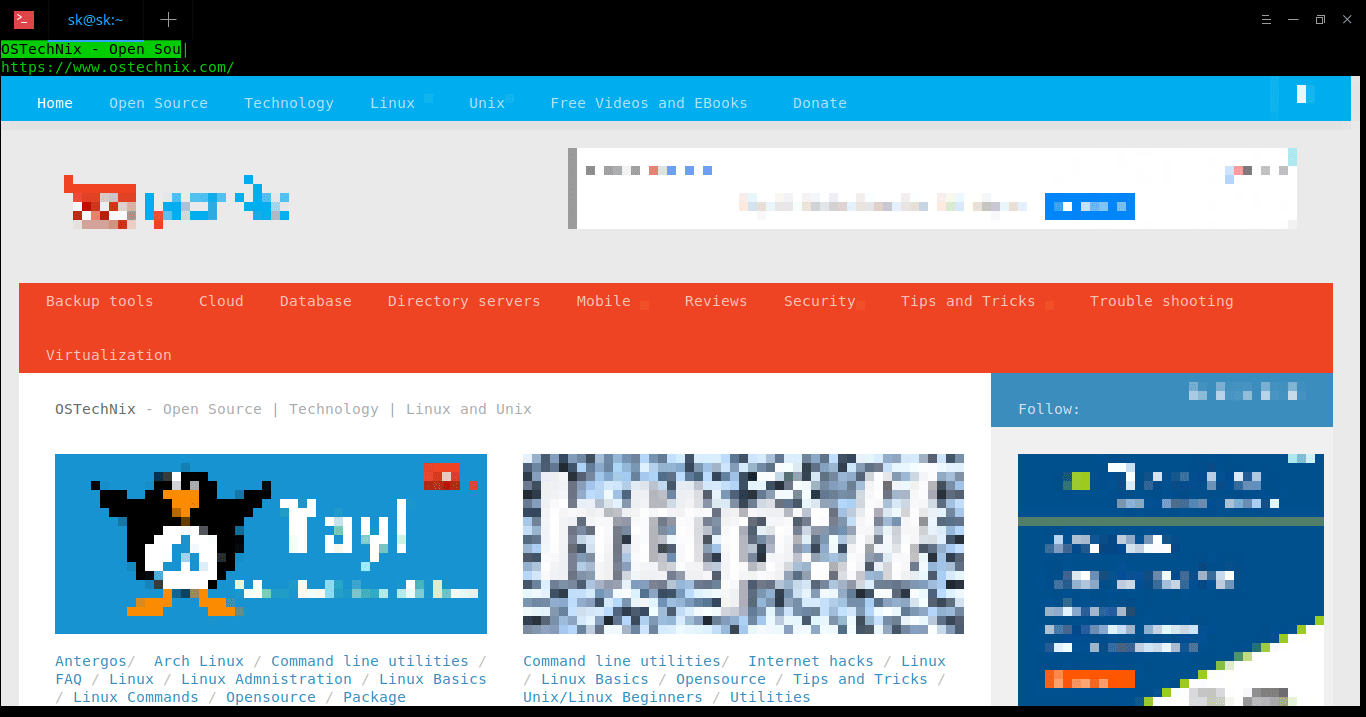 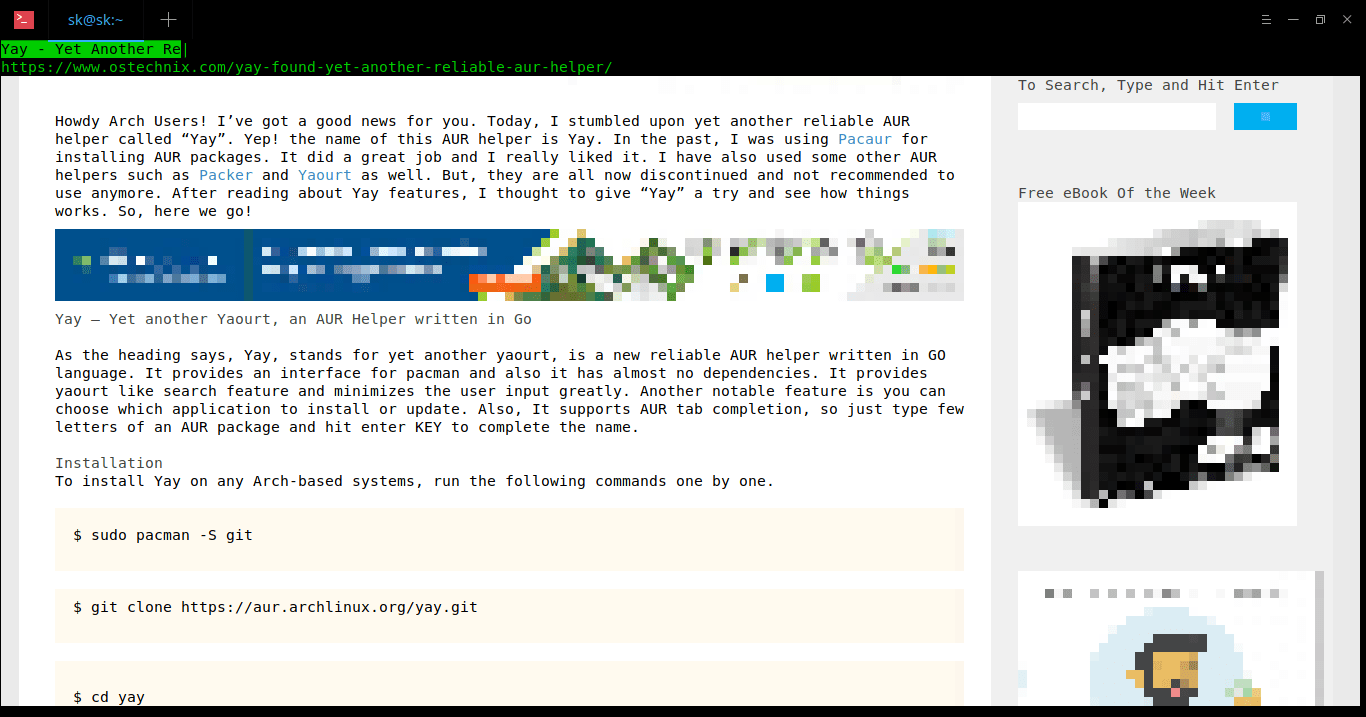 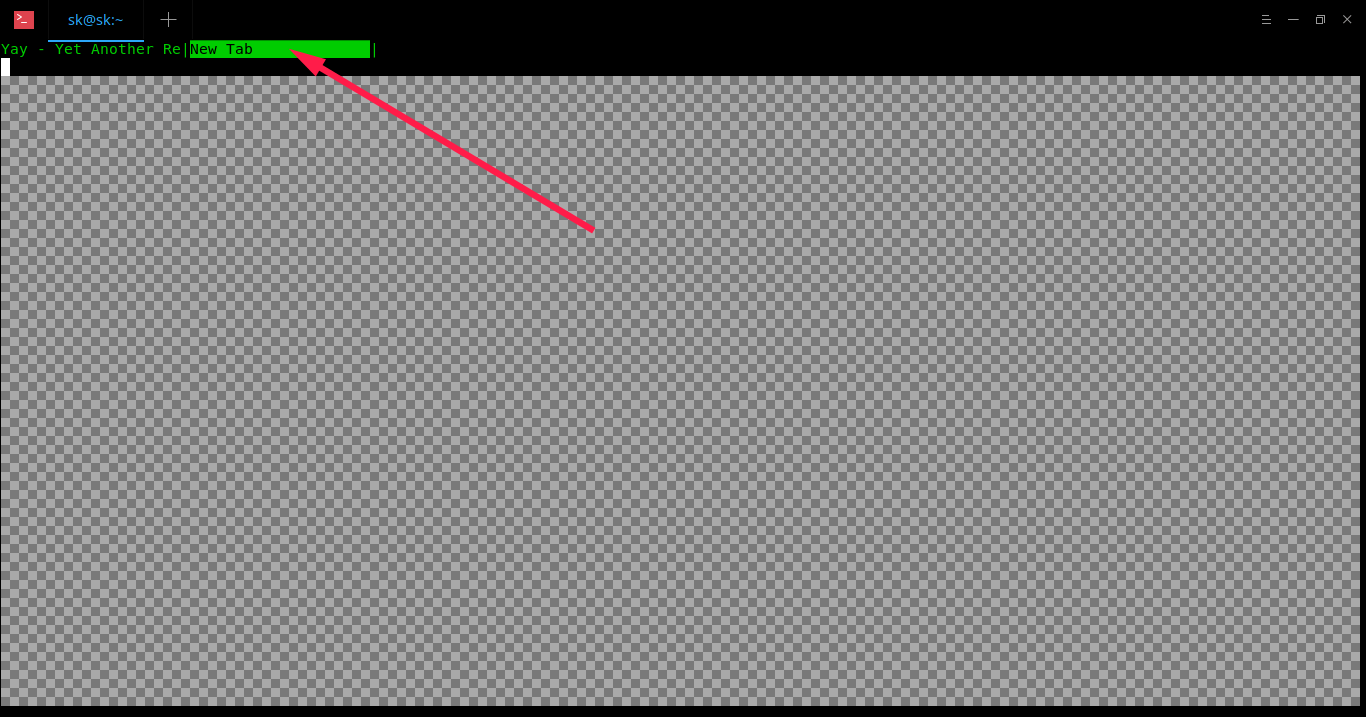 When you have multiple tabs opened, you can switch to next tab using CTRL+TAB. To close the currently active tab, press CTRL+w.

Want to take a screenshot of a page? Browsh has that option too. Press ALT+SHIFT+p. The status bar will display the saved path.

Like I already mentioned, you can watch videos as well. 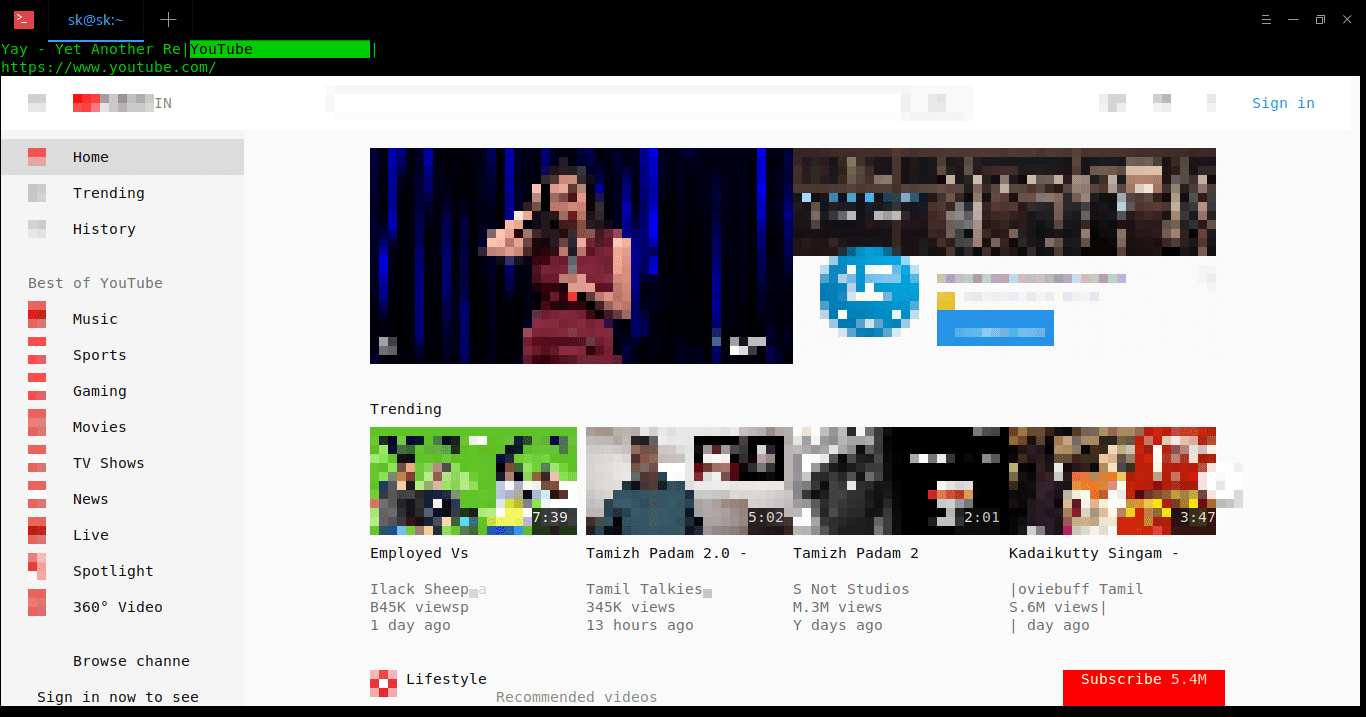 Here is the list of keybindings to use Browsh text-based browser.

If you don't want to install it, you can view the demo to know how Browsh works by running the following command from your Terminal. 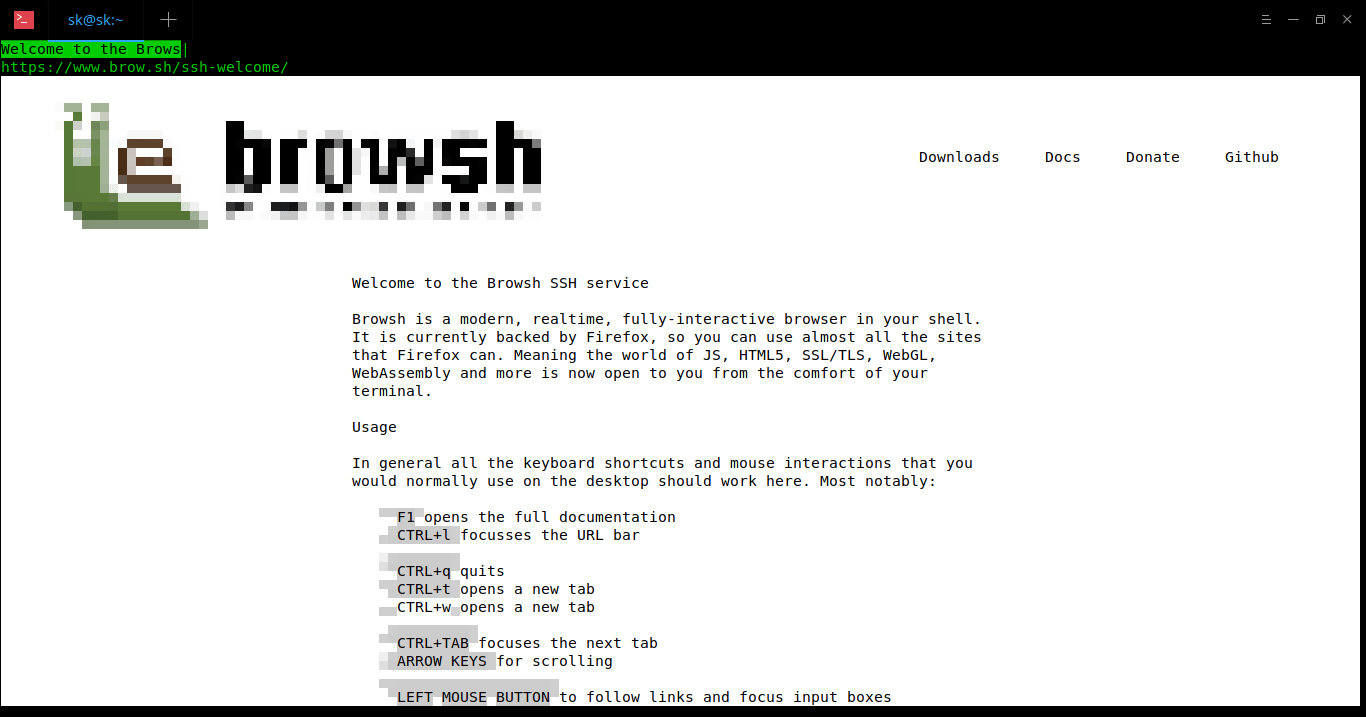 The demo automatically closes after 5 minutes, so you better be hurry to test everything you wanted to know within 5 minutes.

I find it very cool and fascinating way to browse the Internet, without leaving the Terminal. Browsh solves the problem for those who can't afford fast and cheap Internet. Browsh can be run on a remote VM and its lightweight output can be accessed either via SSH/Mosh or its HTML service. So now even if you only have a 3kb/s connection you can still access all the sites that the rest of the world can.

How To Install GNOME Desktop Environment In Arch Linux

How To Quickly Build Virtual Machine Images With...