Sometimes, you will find yourself in a situation where you want to make changes in multiple files. Or you might want to copy the contents of one file to another. If you're on GUI mode, you could simply open the files in any graphical text editor, like gedit, and use CTRL+C and CTRL+V to copy/paste the contents. In CLI mode, you can't use such editors. No worries!  Where there is vim editor, there is a way! In this tutorial, we are going to learn to edit multiple files at the same time using Vim editor. Trust me, this is very interesting Vim feature!

Vim editor is available in the official repositories of most Linux distributions. So you can install it using the default package manager.

For example, on Arch Linux and its variants you can install it using command:

There could be many ways to edit multiples with Vim editor. I know two methods.

I have two files namely file1.txt and file2.txt, with a bunch of random words. Let us have a look at them.

Now, let us edit these two files at a time using Vim editor. To do so, run:

Vim will display the contents of the files in an order. The first file's contents will be shown first and then second file and so on. 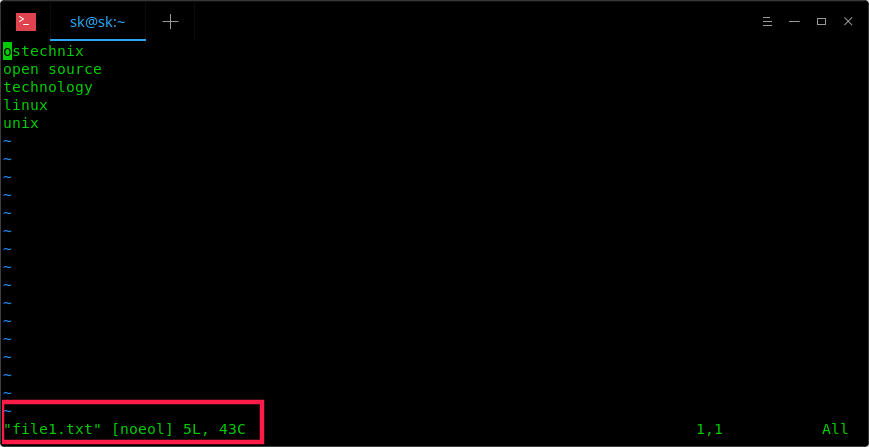 To move to the next file, type: 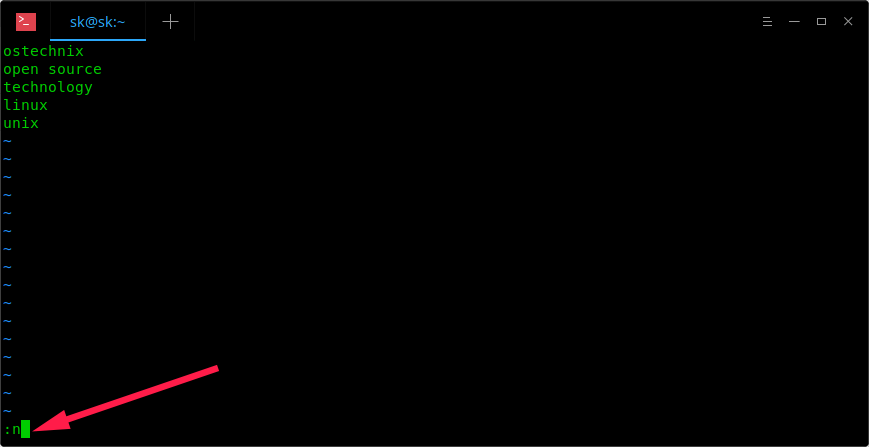 Switch between files in Vim editor

To go back to previous file, type:

Start editing the files as the way you do with Vim editor. Press 'i' to switch to interactive mode and modify the contents as per your liking. Once done, press ESC to go back to normal mode.

Vim won't allow you to move to the next file if there are any unsaved changes. To save the changes in the current file, type:

Please note that it is double capital letters ZZ (SHIFT+zz).

To abandon the changes and move to the previous file, type:

To view the files which are being currently edited, type: 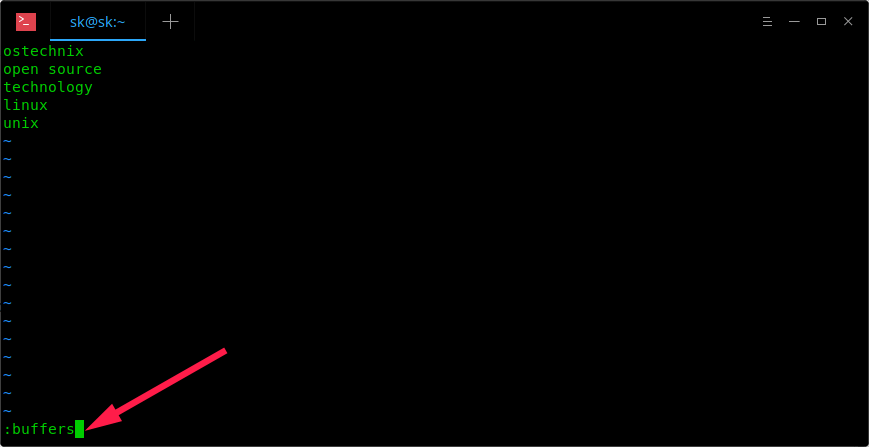 View files in buffer in VIm

You will see the list of loaded files at the bottom. 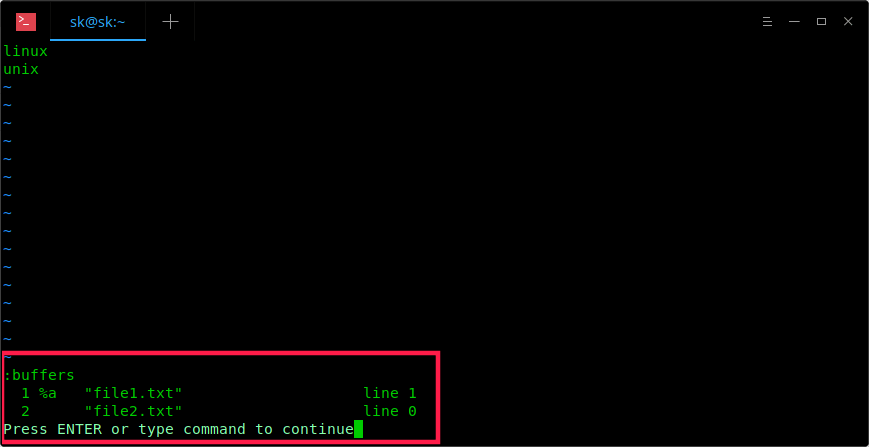 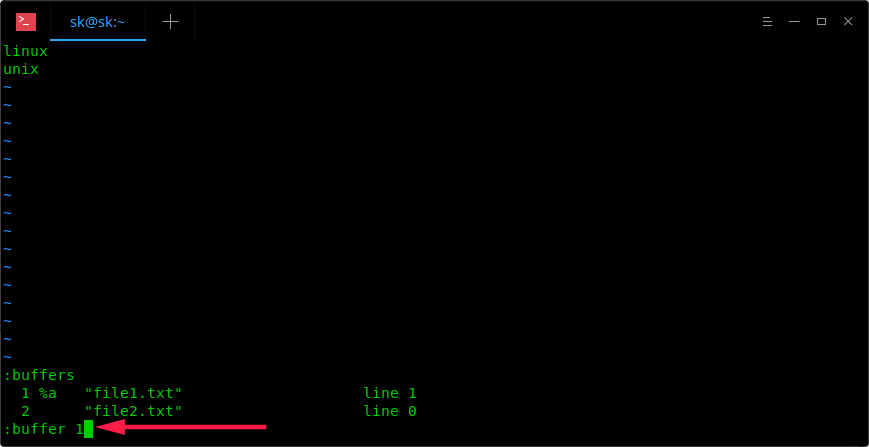 Switch to next file in Vim

Just remember these commands to easily switch between buffers:

We are currently editing two files namely file1.txt, file2.txt. You might want to open another file named file3.txt for editing. What will you do? It's easy! Just type :e followed by the file name like below. 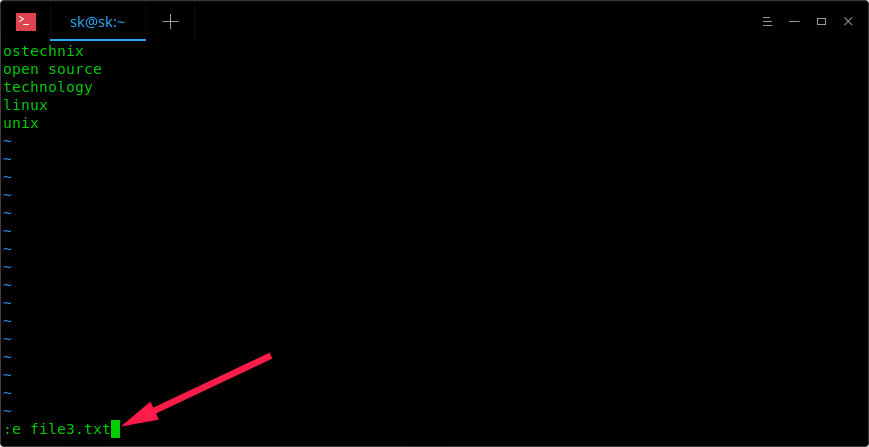 Now you can edit file3.txt.

To view how many files are being edited currently, type: 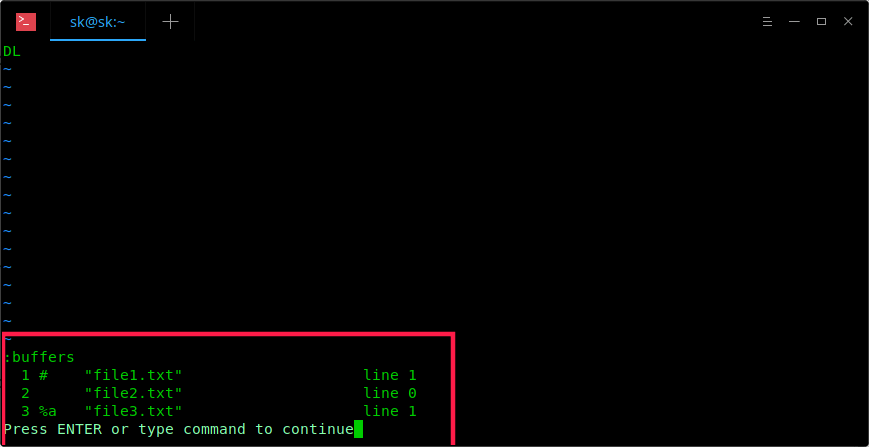 View all files in buffers in Vim

Please note that you can not switch between opened files with :e using either :n or :N. To switch to another file, type :buffer followed by the file buffer number.

Copying contents of one file into another

To do so, first switch to file1.txt:

Place the move cursor in-front of a line that wants to copy and type yy to yank(copy) the line. Then, move to file2.txt: 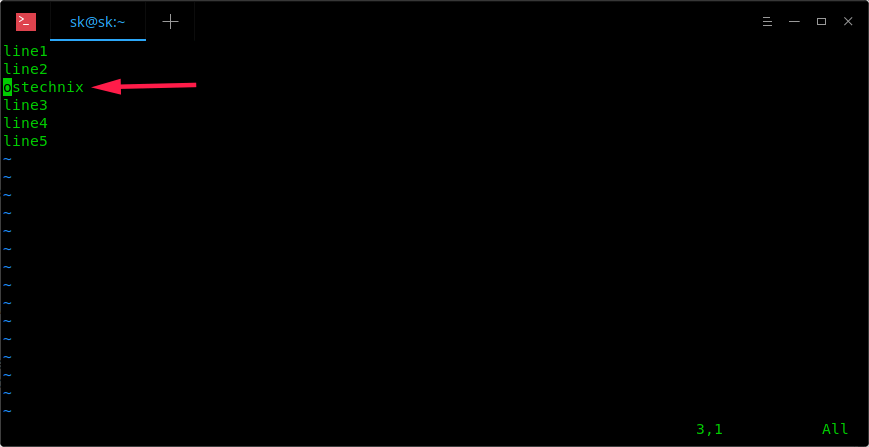 Copying contents of one file into another file using Vim

To save the changes made in the current file, type:

Again, please note that this is double capital ZZ (SHIFT+z).

To save the changes in all files and exit vim editor. type:

Similarly, you can copy any line from any file to other files.

Copying entire file contents into another

We know how to copy a single line. What about the entire file contents? That's also possible. Let us say, you want to copy the entire contents of file1.txt into file2.txt.

To do so, open the file2.txt first:

If the files are already loaded, you can switch to file2.txt by typing: 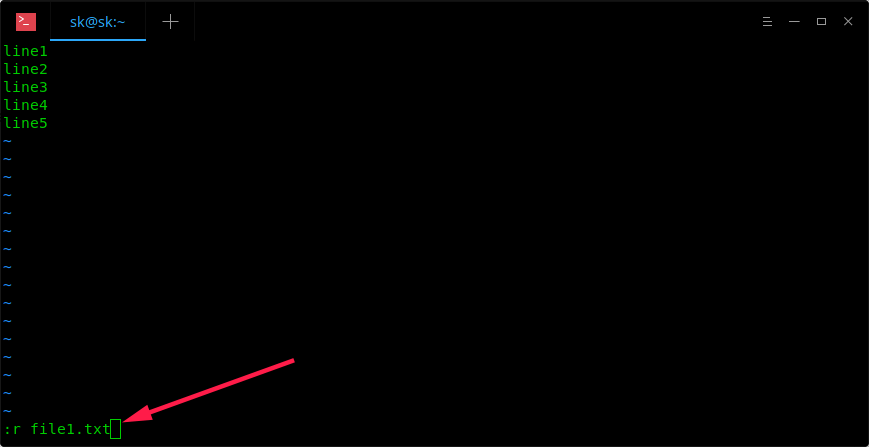 Copying entire contents of a file into another file

Now you will see the contents of file1.txt is pasted after line5 in file2.txt. 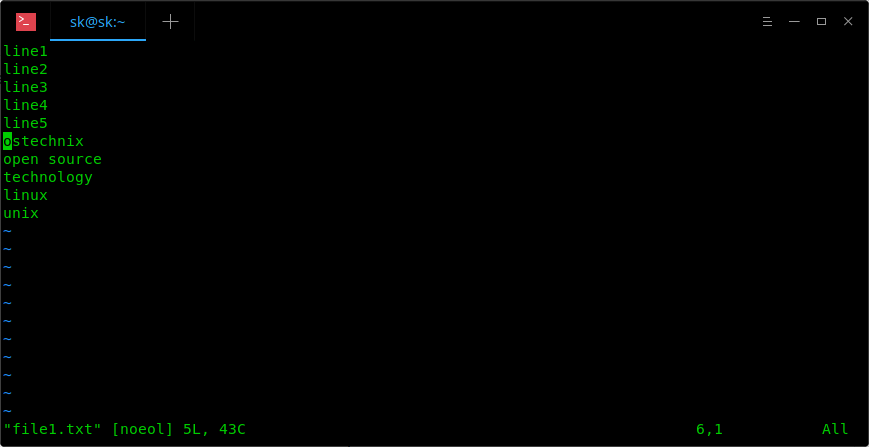 To save the changes in the current file, type:

To save all changes in all loaded files and exit vim editor, type:

The another method to open multiple files at once is by using either -o or -O flags. 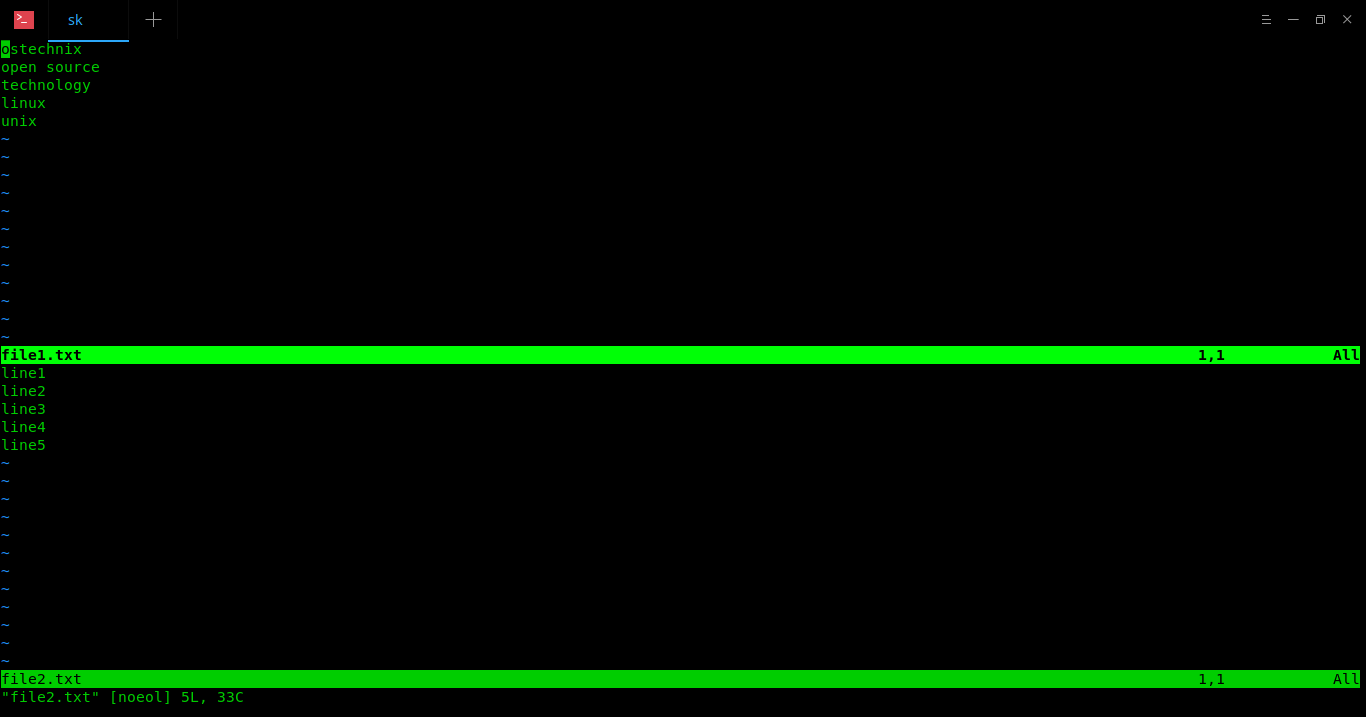 Open multiple files at once in Vim 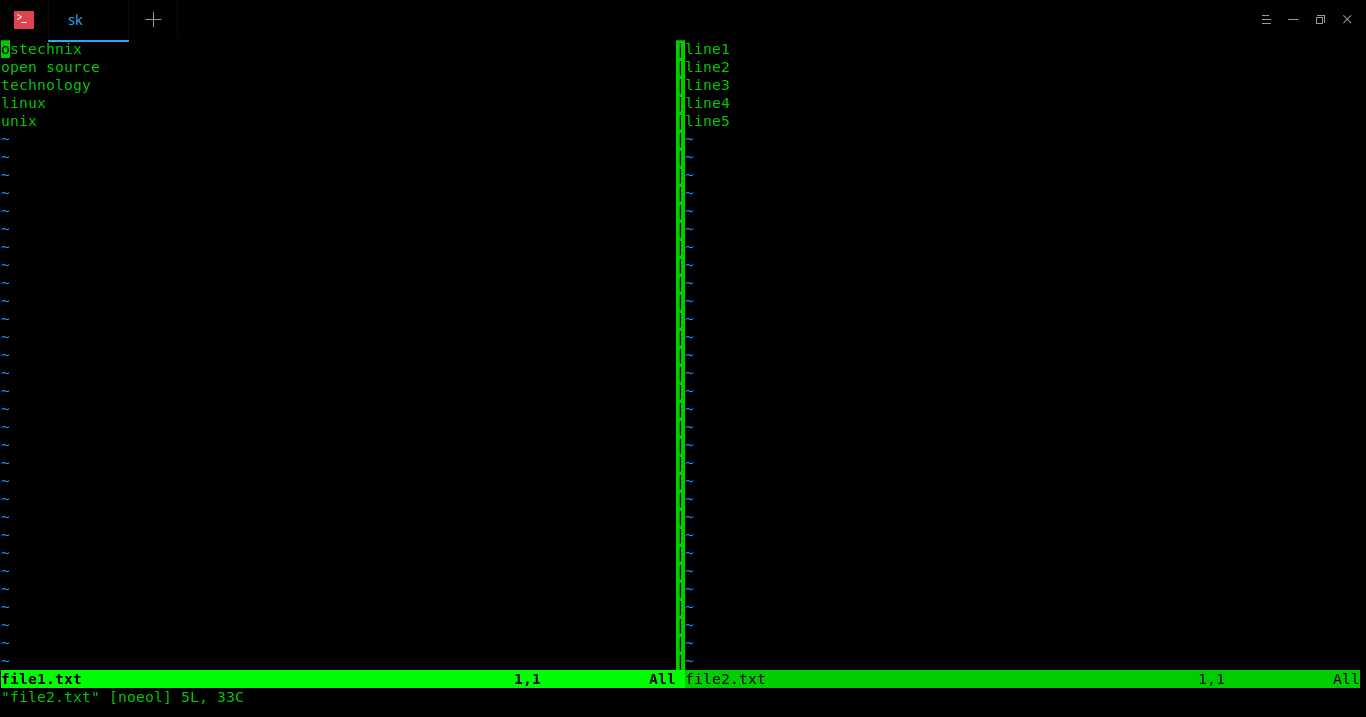 Everything else is same as described in method 1.

To switch between files:

To open an additional file, type:

To copy entire contents of a file into another:

The only difference in method 2 is once you saved the changes in the current file using ZZ, the file will automatically close itself. Also, you need to close the files one by one by typing :wq. But, had you followed the method 1, when typing :wq all changes will be saved in all files and all files will be closed at once.

You know now how to edit multiples files using vim editor in Linux. As you can see, editing multiple files is not that difficult. Vim editor has more powerful features.

We will write more Vim tips in the days to come. Stay tuned!

How To Install And Use Vim-plug Plugin Manager...

How To Use Spell Check Feature In Vim...

How To Use Vim Editor To Input Text...

Talking about multiple file without invoking the :Sex command, shame on you ;)

“Vim won’t allow you to move to the next file if there are any unsaved changes.”
In your .vimrc save setting: set hidden

“To save the changes in the current file, type: ZZ”
Better is to use ex command: :write or shorter :w