Find if a package is installed or not in Linux

The most common way to find if a package is installed or not is to use "which" command like below:

If the nano package is installed, it will display the installed path like below.

As you see, nano package is installed in /usr/bin/ path.

Let us check an another package, for example Emacs:

See? Emacs is not installed.

The "which" command is available by default on most Unix-like operating systems.

Also, there are a few other distribution-specific way to find if a package is installed or not. Read on.

In Arch Linux and its derivatives like Antergos and Manjaro LInux, we can do this using "pacman" command like below:

Did you notice the prefix "local" in-front of the package "nano"? It means that Nano is installed on your system.

If the above command returns nothing, it means that the given package is not installed.

Also read - Getting started with Pacman

In RPM based Linux distributions such as Fedora, RHEL and RHEL clones like CentOS, Scientific Linux, we can find out if a package is installed using "rpm" command as shown below.

As one of our reader "Gregory Pittman" mentioned in the comment section below, we can use dnf command in Fedora to find the installed package.

What you get from these is a list of what is installed and also what is available in repositories. dnf allows a wildcard, and will also be case-insensitive in its search. Sometimes you don’t quite know what you’re looking for or the correct spelling.

In DEB based system like Debian, Ubuntu and its derivatives like Linux Mint, and Elementary OS, we can do this using "dpkg" command. 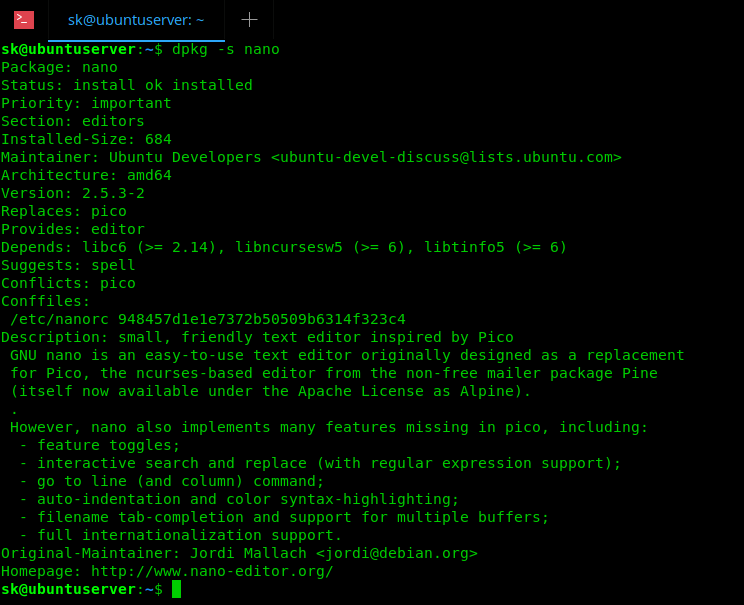 Find if a package is installed or not in Debian, Ubuntu Linux Using dpkg command

This is not the only way to find the installed packages. Here are some more commands.

Here is another one.

And one more command....

Or, use this command:

To check if a package is installed or not in SUSE and openSUSE, run:

Find if a package is installed or not using "has" utility

Trust me, this is super easy! The "has" utility will check the presence of various command line tools on the path and also reports their installed version.

To install it run the following commands:

Now check if a package is available or not like below.

You will see the cross mark if the package is not installed. Check the following example.

You can check for multiple packages as well.

If you don't want to install it, you can directly use it like below. Your system must be connected with Internet though.

To check for multiple packages:

Create an alias if you're too lazy to type the whole command:

Find if a package is installed or not in Unix

In FreeBSD, we can do this using "pkg" command:

To view all installed packages, you can use the following command:

This will take a few seconds to minute depending upon the number of packages you have in your FreeBSD system.

You know now how to find if a package is installed or not using the official and non-official way from command line. As you can see, it is not that difficult. It's just a couple commands which you can easily remember. If you can't remember these commands, just bookmark them or save them in the Terminal itself to run on demand.

How To Easily Correct Misspelled Bash Commands In Linux

How To Restore Sudo Privileges To A User...

Delete Files That Have Not Been Accessed For...

which e.g.
which nano
/usr/bin/nano

You can also use dnf/yum as in
dnf list packagename
or even
dnf list package*
What you get from these is a list of what’s installed and also what’s available in repositories. dnf allows a wildcard, and will also be case-insensitive in its search. Sometimes you don’t quite know what you’re looking for or the correct spelling.

Dear SK, please take a look at the manual of which command! It finds an executable if the directory which contains it, is in the path of your current environment.