How To Find USB Device Bandwidth Usage On Linux

The other day I wanted to check how much bandwidth is being used by my external USB drive when transferring files from my local hard drive to an external drive. While looking for an easy way, I came across a command line utility named "Usbtop". Usbtop is a top-like CLI utility that helps us to find USB device bandwidth usage on Linux. It shows an estimated instantaneous bandwidth on USB buses and devices. Using this tool, we can easily check what devices are using how much bandwidth.

Usbtop is available in AUR, so you can install it on Arch linux and its variants using any AUR helper, for example Yay.

On Debian, it is available in the default repositories. Run the following command to install it:

On Ubuntu and its derivatives, you need to compile and install it from source like below.

The above command will clone all the contents of Usbtop repository in "usbtop" directory in the current working directory. Cd into the usbtop directory:

Next create local build directory and cd into it:

Finally, install Usbtop by running the following commands one by one:

Once installed, make sure the usbmon module is loaded.

Connect your USB drive and copy some files in it. Open Terminal and run usbtop command with sudo privileges to estimate bandwidth usage. 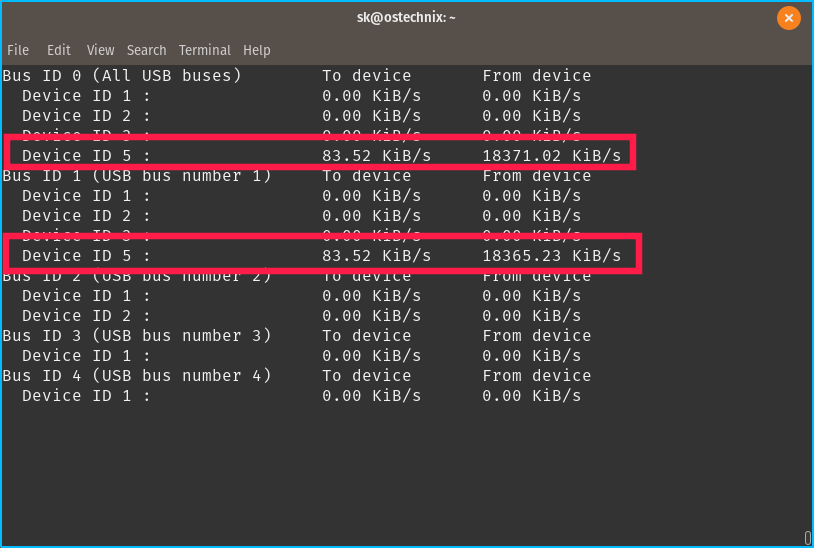 To monitor bandwidth traffic on a specific USB bus, run:

This command will monitor bandwidth traffic on usbmon1 bus only.

For details, refer the help section.

I have tested with USB external drive and thumb drive. You can, however, use it for all devices such as USB webcam, printer etc., to monitor bandwidth.

I will keep looking for more utilities to check bandwidth usage of USB buses and devices and update this guide accordingly. Bookmark and visit it later.

How To Display Bash History Without Line Numbers

How To View Image Metadata On Linux

How To Run A Command For A Specific...

How To Manually Add Messages To Linux System...

Double Commander gives this info by copiing and writing files to flash drive – it is quite easier.

I didn’t know. Thanks.