Tilda is a free, open source, highly configurable an customizable GTK-based drop down Terminal emulator for Unix-like operating systems. Unlike other traditional Terminals like gnome-terminal (Gnome), Konsole (KDE), MATE Terminal (MATE), xterm and many others, Tilda has no border window and is hidden until a key or keys pressed. It's design was inspired from the classical Terminals used in first person shooter games, Quake, Doom and Half-Life to name a few. It has no border window, menu bar, title bar, and minimize or maximize buttons. It can be pulled up and down when a key is pressed. Tilda is popular among developers and those who are using Terminal mostly to perform almost all tasks. In this brief guide, we will see how to install and use Tilda in various Linux operating systems.

On Arch Linux and its derivatives:

Tilda is a available in the default repositories of Arch Linux and its derivatives like Antergos, Manajaro Linux. So, you can install it using Pacman as shown below.

On Debian, Ubuntu and derivatives:

In APT-based systems such as Debian, Ubuntu, and derivatives like Linux Mint, install TIlda using command:

In SUSE and derivatives, you can install Tilda by running the following command:

This is how Tilda Terminal emulator looks like after you launch it. 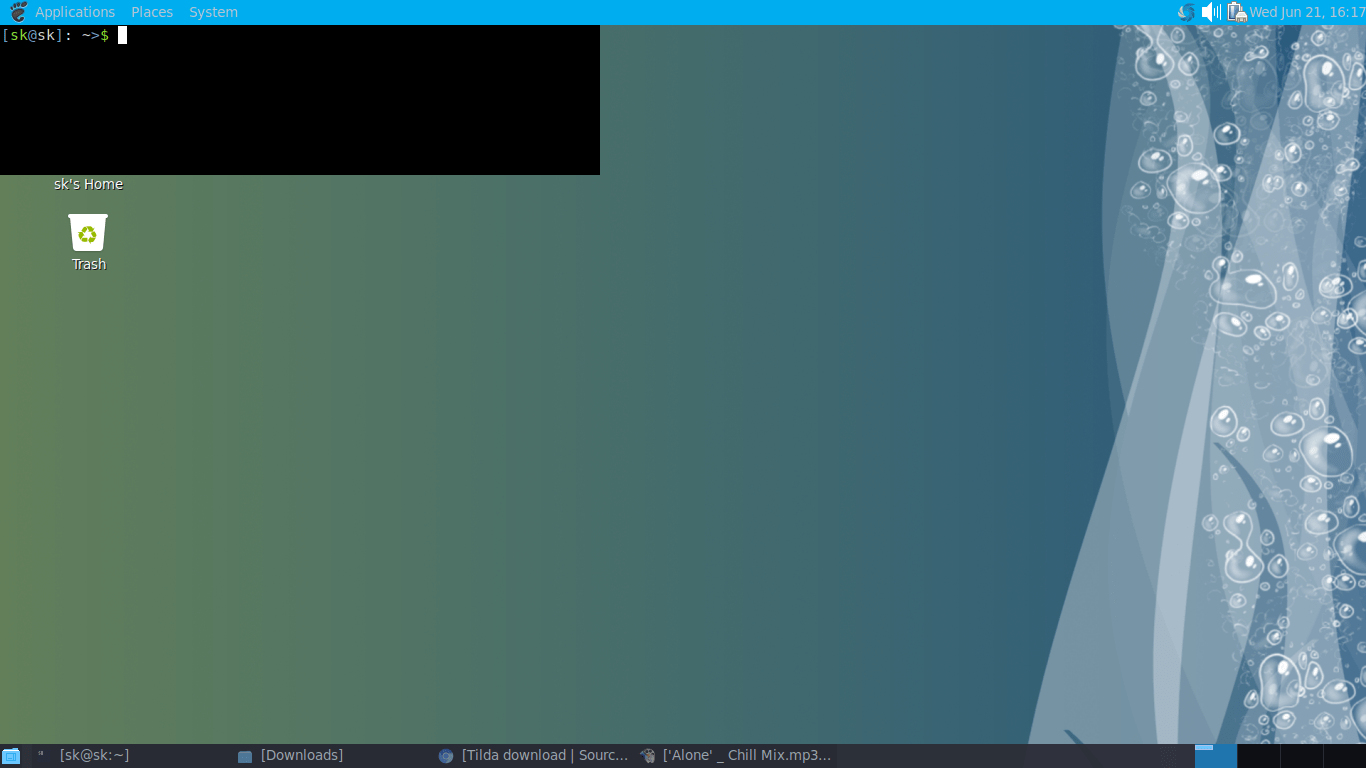 As you see in the above screenshot, Tilda has no border window, menu bar or tittle bar. By default, it always appears on top of all applications. However, you can customize it as per your liking.

Here is the default hotkeys to use Tilda. 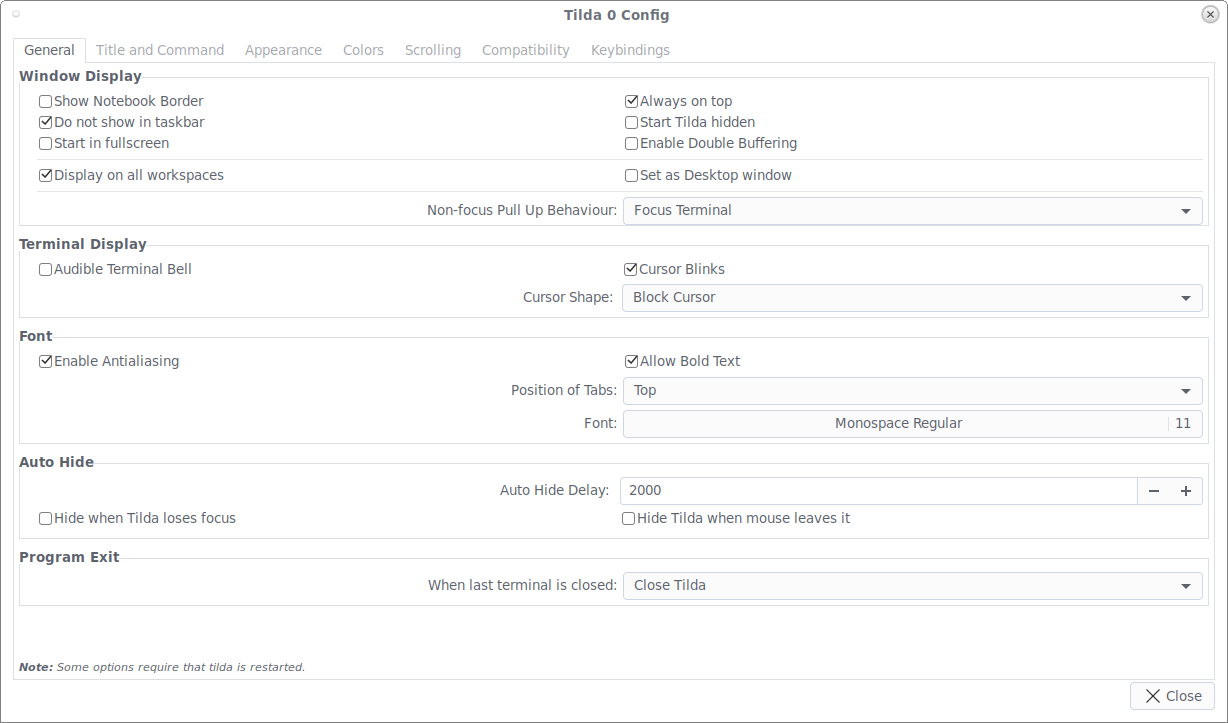 As you see in the above screenshot, Tilda has many options to tweak it as per our wish.

In General options, you can,

In Title and Command section, you can assign the title of Tilda, run a custom command instead of shell when launching Tilda, and so on.

In Appearance tab, you can adjust the height, width, and position of the Tilda window. Also, you can enable transparency, animated pull down (hide) etc.

In Colors tab, you can choose or set foreground and background colors for your Terminal window.

In Scrolling tab, you can enable or disable scrolling, and also you can set the scrollback value to any lines of your choice. Quite useful for viewing source code and long Terminal output.

In Keybindings tab, you can adjust/modify the hotkeys.

Set Tilda Terminal as transparent wallpaper for your desktop

It is also possible to set Tilda Terminal as transparent wallpaper for your Linux desktop. 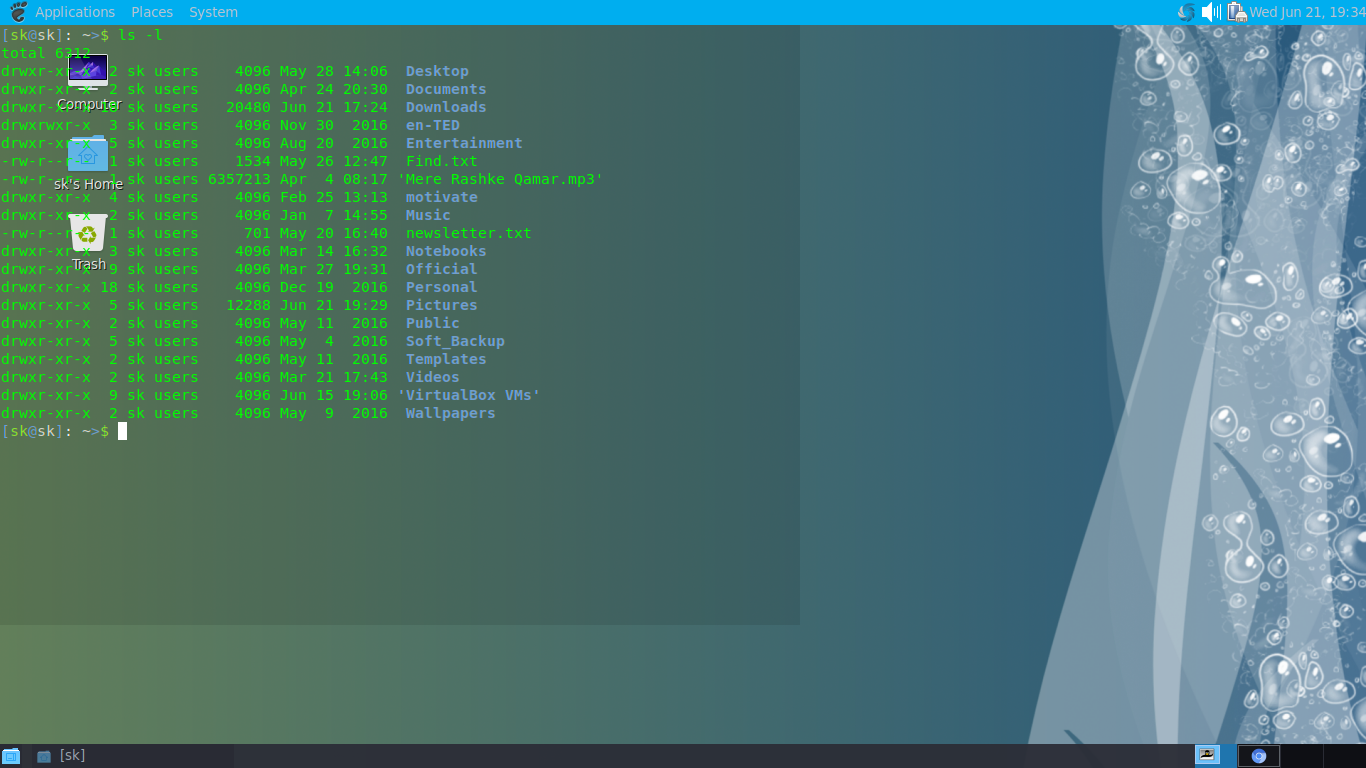 If, you have setup Tilda as "always on top", you can't view/access other opened applications. In this case, press F1 key to hide Tilda Terminal window and access other opened windows. Press F1 again to bring back Tilda. To quit, press SHIFT+CTRL+q, or right click on any empty area of Tilda window and choose "Quit".

I am quite comfortable with Tilda terminal, and I am going to use it for a while. It allows me to tweak and customize various settings. I really liked the way of its functionality and simplicity. Hope you will like it too.

How To Install Packages From A Specific Repository In Linux

How To Remove Installed Packages From A Specific Repository In CentOS, Fedora

Create Shortcuts To The Frequently Used Directories In...

How To Record Terminal Sessions As SVG Animations...

Tilda has always been too unstable for me. Guake ftw! 🙂 (though Tilix is also pretty good, but too much RAM and too advanced for me)