Nowadays, especially in this quarantine time, the kids are probably spending more time using Computers than the text books. As a parent and a teacher, you must keep an eye on them to know how much time they are spending on Computers, and you should limit their excessive computer usage. There are plenty of parental control applications available to get this job done. The one today we are going to discuss is Timekpr-nExT. In this guide we will see, how to control the computer usage of user accounts using Timekpr.

For those who don't know, Timekpr is a parental control application that can be used to control the Computer usage. If you think your kid is spending too much time on computers, you can set time limit for the kid's user account, and prevent them to use the computer for a very long time. We can set time duration, and at what time the kid can able to login to the computer. In layman terms, we can easily limit their daily usage based on a timed access duration and configure periods of day when they can or cannot log in. It is formerly known as Timekpr-revived and it is originally known as Timekpr when it was first released. I don't know why the developer is keep renaming it. Instead of renaming the project often, the developer should consider to use a version number for each release.

I tested this application in Ubuntu 18.04 LTS version. It worked well as expected.

To install the latest version, add the following PPA:

If you want to try the development version, run:

Alternatively, you can download the .deb file from here depending upon your system's architecture, and manually install it as shown below.

I use Arch, btw

TImekpr is available in AUR. So you can install it using any AUR helper programs on Arch Linux and its variants like Manjaro Linux. 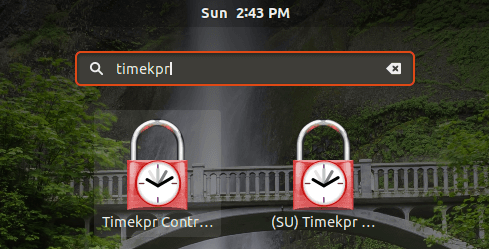 The default interface of Timekpr-nExT will look like below. 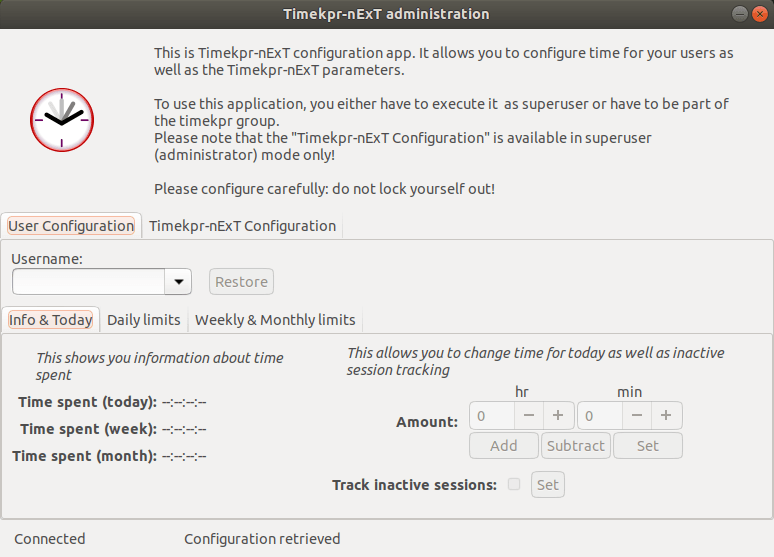 As you can see in the above window, there are two main tabs namely:

This is the important section where we configure user restrictions. Choose the user account that you want to control from "Username" drop-down box in "User Configuration" tab. Please choose the correct user account from the list and configure carefully. Do not lock yourself out! 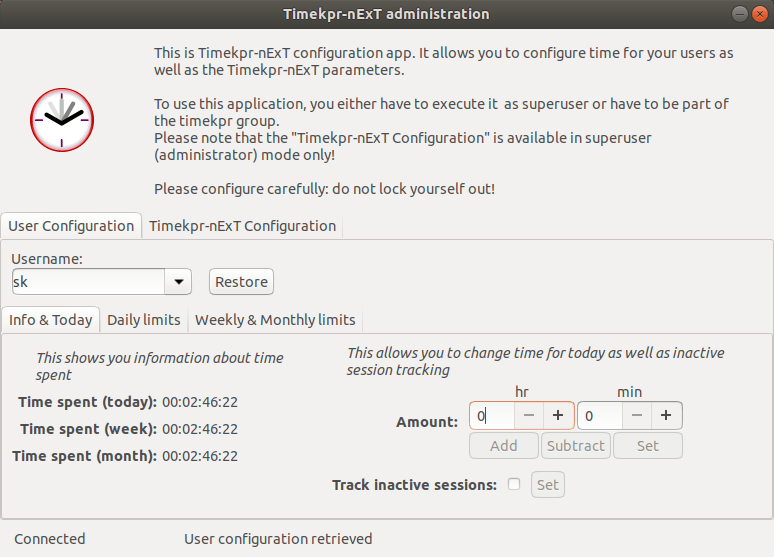 The Info & Today tab displays the information about time spent by the selected user in the system.

The Daily limits tab lets you to configure time limits for week days. In this tab, you can specify day's limit for the user by configuring the hours and minutes value.

The  time can be configured in time intervals. It's possible to have more than one time interval a day, say for example we can set time interval from 6:00 - 10:00 and 21:00 - 24:00. Press plus or minus to configure the day limits and press Set button to apply.

We can also configure the time interval by minutes. For example, it is possible to set minute configuration from 6:15 - 9:45. However, it's not possible to have more than one interval per hour. For example, it is NOT POSSIBLE to intervals from 6:00 - 7:15 and 16:45 - 18:00 at the same time. After configuring the time intervals, simply press Apply daily limits button at the bottom. 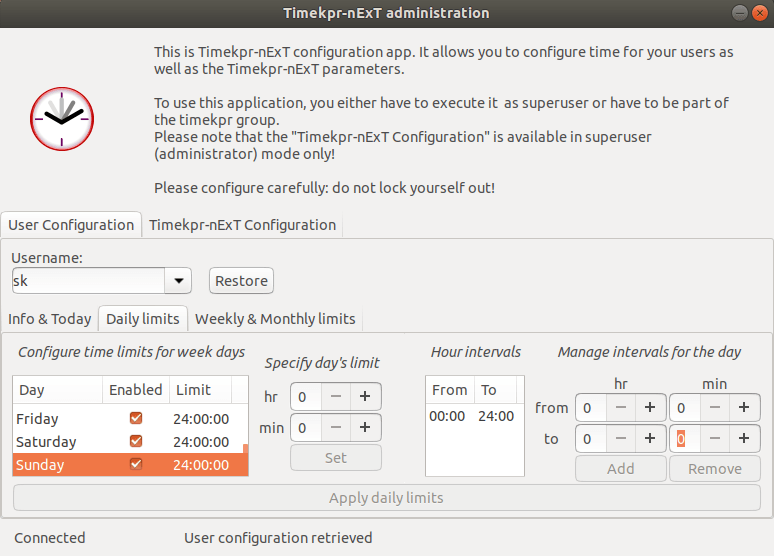 In the Weekly & Monthly limits section, you set,

Similarly, you can set time intervals by month-wise.

Good thing is Timekpr will not take inactive sessions into account. If the user put the system in lock mode, then the time is not counted.

In the next main tab "Timekpr-nExT configuration", you will see the user related configuration details, such as;

TImekpr can be launched using the following three command programs.

You will see the Timekpr systray icon in your system tray.

From the Timekpr tray icon, the user can;

Timekpr is a must have application for Home computers. Please be mindful that Timekpr isn't a Firewall or any sort of Website or application blocker. It will simply limit the Computer usage. Nothing more, nothing less.

It is not just for Kids, you can also use it in your office, or college to limit any user's computer usage. Give it a try, you won't be disappointed.

How To Run All Scripts In A Directory In Linux

How To Find Out Which Groups A User...

I hope it gets updated for ubuntu 18.04 which will be released in a few days. As far as I recall it only worked with unity UI before. Ubuntu 18.04 will run Gnome instead.

It would seem that the developer has updated the name of the package to install.

Yes, he is keep renaming the app. It was first known as Timekpr, and then Timekpr-revived. Now it is Timekpr-nExT. Don’t know why the developer is renaming the project.

The developer is NOT renaming the project, it’s simple – Timekpr revived was extension of Timekpr (different author), because developer just made it work for newer versions of Ubuntu, no access to original project.

nExT is completely different beast, based on different tech and not supported on Ubuntu less than 16.04.

Those who like, can use revived, for more stuff use nExT.
After all, it has more features and completely written from scratch. They are not comparable.
Hope it clears the understanding.