We've already learned to use GNU Screen to manage multiple Terminal sessions. Today, we will see yet another well-known command-line utility named "Tmux" to manage Terminal sessions. Similar to GNU Screen, Tmux is also a Terminal multiplexer that allows us to create number of terminal sessions and run more than one programs or processes at the same time inside a single Terminal window. Tmux is free, open source and cross-platform program that supports Linux, OpenBSD, FreeBSD, NetBSD and Mac OS X. In this guide, we will discuss most-commonly used Tmux commands in Linux.

Tmux is available in the official repositories of most Linux distributions.

On Arch Linux and its variants, run the following command to install it.

On RHEL and CentOS:

Well, we have just installed Tmux. Let us go ahead and see some examples to learn how to use Tmux.

The default prefix shortcut to all commands in Tmux is Ctrl+b. Just remember this keyboard shortcut when using Tmux.

Note: The default prefix to all Screen commands is Ctrl+a.

To create a new Tmux session and attach to it, run the following command from the Terminal:

Once you are inside the Tmux session, you will see a green bar at the bottom as shown in the screenshot below. 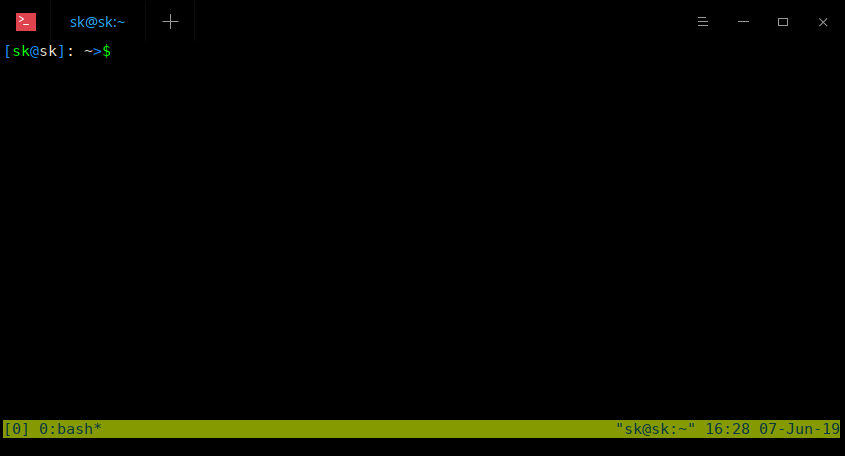 It is very handy to verify whether you're inside a Tmux session or not.

To detach from a current Tmux session, just press Ctrl+b and d. You don't need to press this both Keyboard shortcut at a time. First press "Ctrl+b" and then press "d".

Once you're detached from a session, you will see an output something like below.

If you use multiple sessions, you might get confused which programs are running on which sessions. In such cases, you can just create named sessions. For example if you wanted to perform some activities related to web server in a session, just create the Tmux session with a custom name, for example "webserver" (or any name of your choice). 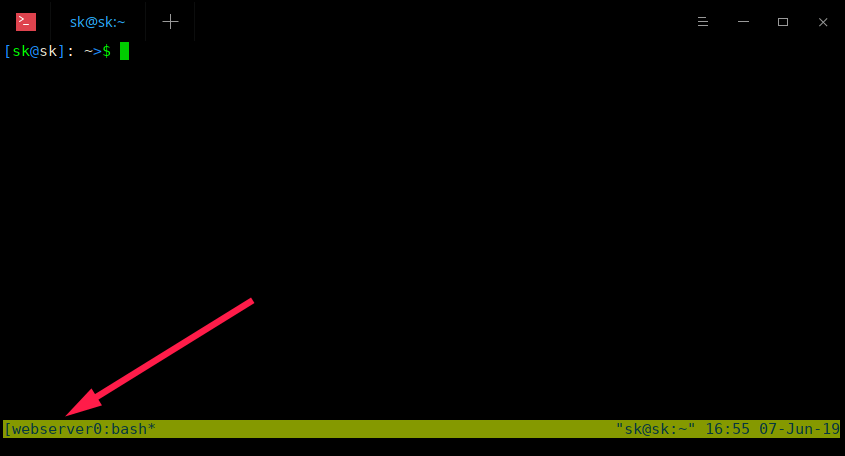 Tmux session with a custom name

As you can see in the above screenshot, the name of the Tmux session is webserver. This way you can easily identify which program is running on which session.

To view the list of open Tmux sessions, run: 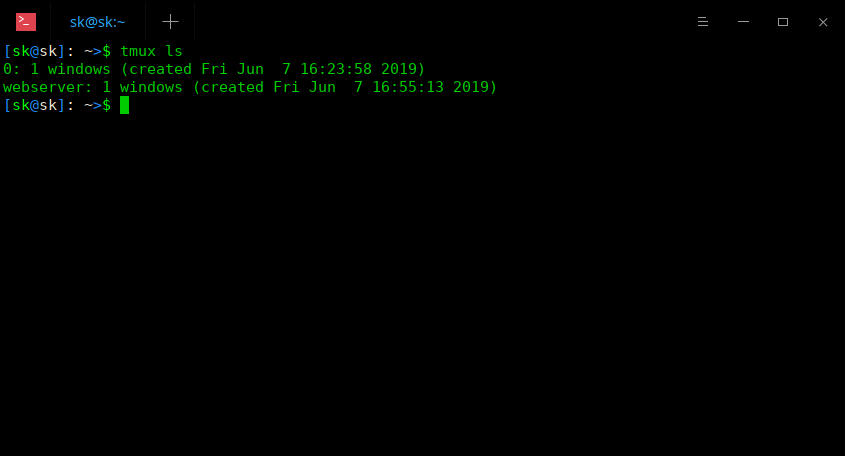 As you can see, I have two open Tmux sessions.

Sometimes, you might want to simply create a session and don't want to attach to it automatically.

The above command will create a new Tmux session called "ostechnix", but won't attach to it.

You can verify if the session is created using "tmux ls" command: 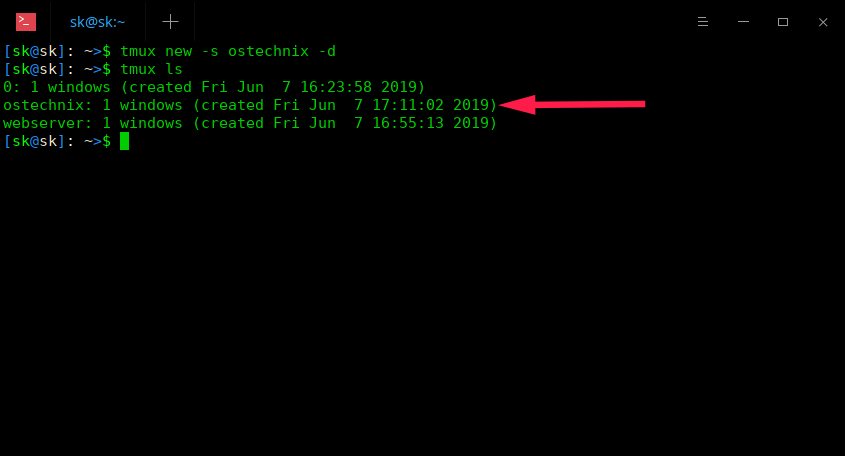 You can attach to the last created session by running this command:

If you want to attach to any specific named session, for example "ostechnix", run:

When you're done and no longer required a Tmux session, you can kill it at any time with command:

To kill when attached, press Ctrl+b and x. Hit "y" to kill the session.

You can verify if the session is closed with "tmux ls" command.

To Kill Tmux server along with all Tmux sessions, run:

Be careful! This will terminate all Tmux sessions even if there are any running jobs inside the sessions without any warning.

When there were no running Tmux sessions, you will see the following output:

Tmux has an option to split a single Tmux session window into multiple smaller windows called Tmux panes. This way we can run different programs on each pane and interact with all of them simultaneously. Each pane can be resized, moved and closed without affecting the other panes. We can split a Tmux window either horizontally or vertically or both at once. 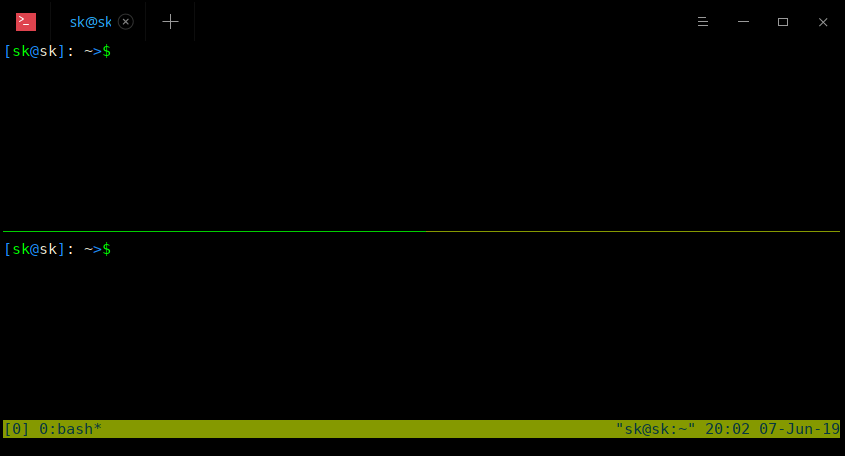 Use the same key combination to split the panes further.

To split a pane vertically, press Ctrl+b and %.

We can also split a pane horizontally and vertically at the same time. Take a look at the following screenshot. 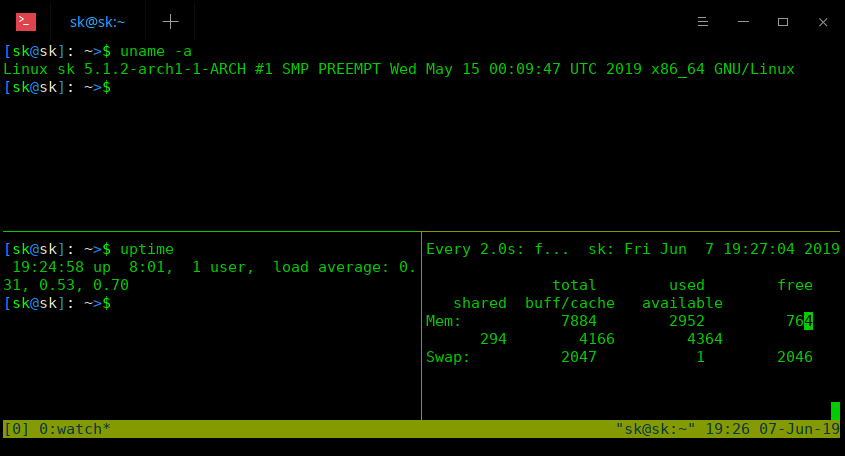 As you see in the above screenshot, I am running three different programs on each pane.

To switch between panes, press Ctrl+b and Arrow keys (Left, Right, Up, Down).

Send commands to all panes

In the previous example, we run three different commands on each pane. However, it is also possible to run send the same commands to all panes at once.

To do so, press Ctrl+b and type the following command and hit ENTER:

Now type any command on any pane. You will see that the same command is reflected on all panes.

To kill a pane, simply type exit and ENTER key. Alternatively, press Ctrl+b and x. You will see a confirmation message. Just press "y" to close the pane. 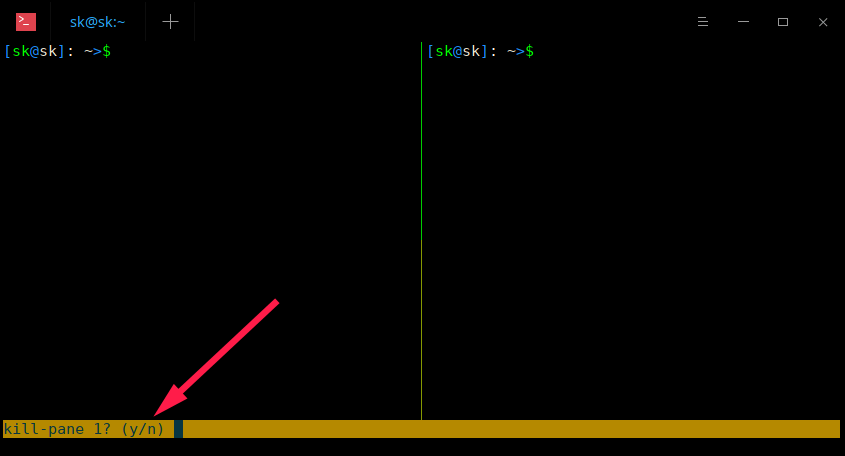 Zoom in and Zoom out Tmux panes

We can zoom Tmux panes to fit them into the full size of the current Terminal window for better text visibility and for viewing more of its contents. It is useful when you need more space or  focus on a specific task. After finishing that task, you can zoom out (unzoom) the Tmux pane back to its normal position. More details in the following link.

It is always a good practice to run a long running process inside a Tmux session when working with remote systems via SSH. Because, it prevents you from losing the control of the running process when the network connection suddenly drops. One way to avoid this problem is to autostart Tmux sessions. For more details, refer the following link.

At this stage, you will get a basic idea of Tmux and how to use it to manage multiple Terminal sessions. For more details, refer man pages.

Both GNU Screen and Tmux utilities can be very helpful when managing servers remotely via SSH. Learn Screen and Tmux commands thoroughly to manage your remote servers like a pro.

How To Rescue Virtual Machines With Virt-rescue

Just Ctrl+D (analog of “exit”) for pane/session close. No need to kill somebody 😀

How To Find Which Service Is Listening...