How To Make Linux System To Run Faster On Intel CPUs

You probably have heard about Meltdown and Spectre vulnerabilities that affected many modern processors, including certain processors by Intel, AMD, System Z, Power and ARM. Thankfully, the Kernel developers have released security patches to address the Meltdown/Spectre issues. In the recent Kernel versions, the patches are implemented by default. Even though the security patches helps to mitigate the vulnerabilities, they also have impacted the system's performance as well. Yes, the mitigations will cause a performance hit. If you are confident that your systems are well-protected and want every ounce of performance that you can get out of your personal system, this guide is for you. This brief guide explains how to make Linux system to run faster on Intel CPUs by turning off the Spectre and Meltdown mitigations.

A word of caution

Before implementing the following solution, I must warn you - THIS IS HIGHLY INSECURE and NOT RECOMMENDED. This will disable all Spectre and Meltdown mitigations on Intel CPUs and leave your Linux systems wide open to all security risks. Unless you clearly know what you are doing, don't do this. You have been warned!

If you simply don't care about the security, go ahead and disable the mitigations as described below.

If you're using Linux Kernel version 5.1.13 and newer, add/edit the following Kernel parameter like below:

This will disable all optional CPU mitigations. This improves system performance, but it may also expose users to several CPU vulnerabilities.

If you're using Kernel versions older than 5.1.13, add/edit the following instead: 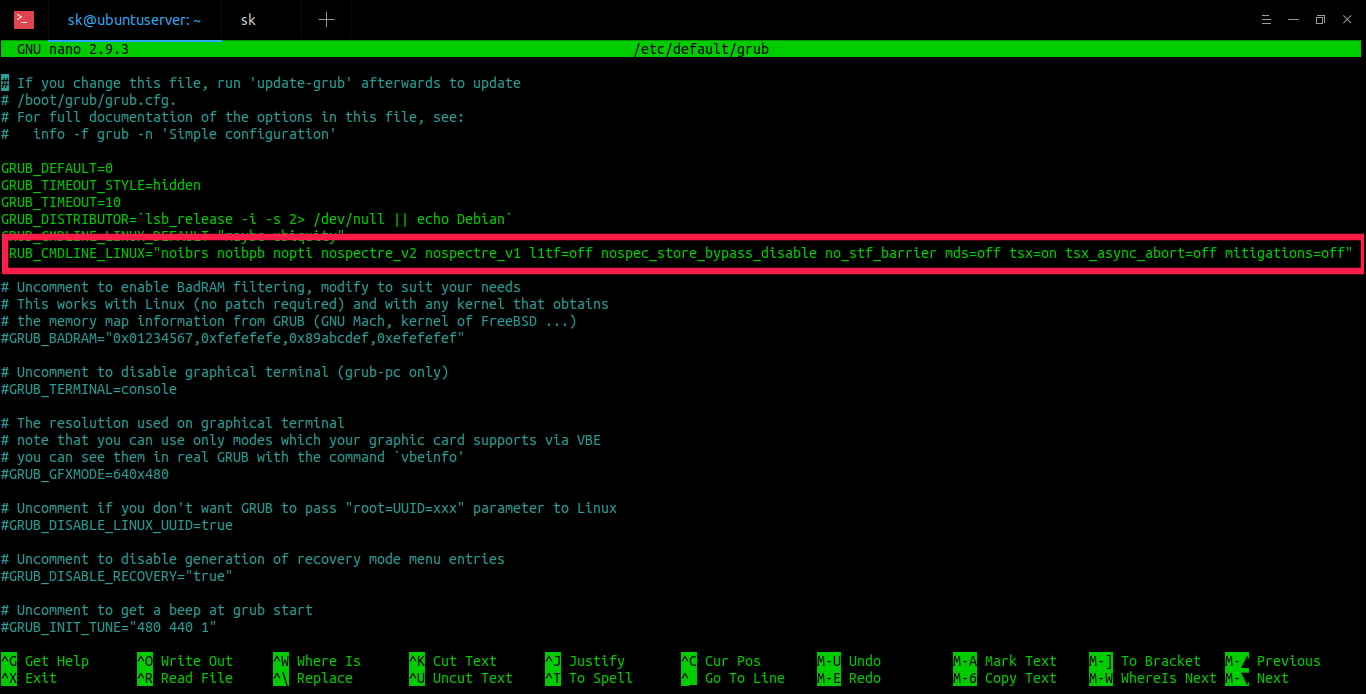 Kernel parameters for disabling all the Spectre and Meltdown mitigations

These are the Kernel parameters that you can use for disabling all the Spectre/Meltdown mitigations that are slowing down your Linux system.

Know what each flag does:

For more details about each flag, do a quick google search.

On RPM-based systems like CentOS and RHEL, edit /etc/sysconfig/grub file:

Add the above parameters in GRUB_CMDLINE_LINUX. And then update GRUB configuration using command:

In some Linux systems, you might need to add these Kernel parameters in "GRUB_CMDLINE_LINUX_DEFAULT="...".

We have now disabled all Spectre and Meltdown mitigations. This will boost your system's performance a little bit, but it may also expose users to several CPU vulnerabilities.

Check if Spectre/Meltdown mitigations are disabled

We can use "spectre-meltdown-checker" tool that helps you to identify the Spectre and Meltdown vulnerabilities in Linux. It is available in the official repositories of some Linux distributions.

After installing spectre-meltdown-checker, run it as root user or with sudo privileges to check if Spectre and Meltdown mitigations are turnd off:

Run some benchmarks, and check how much performance you will gain, and then decide whether it's worth to disable everything.

As I have already warned, this tip is a useful and sensible option for home or single-user computers. But not recommended for production systems.

How To Create A Montage From Images In Linux

Hi,
Very useful Article for test
Thanks a lot

If I don’t use GRUB and use standart EFI boot loader, how to disable all Spectre and Meltdown?

This is the best article I’ve read on here for a long time. I’ve been already using this but it is good to see it published in such detail. Thanks!