This brief tutorial explains three different ways to auto logout inactive users after a particular period of time in Linux and Unix-like systems.

Picture this scenario. You are managing a shared server that is regularly being accessed by many users from all systems in the network.

There are chances that some user may forget to logout his session and left the session open. Leaving an user session open is dangerous and some users may misuse it intentionally.

Would you manually check each and every system to verify whether the users have logged out or not? It is not necessary! Also, It's quite time consuming task if there are hundreds of machines in your network.

Instead, you can make an user to auto logout from a local or SSH session after a particular period of inactivity.

We can auto logout inactive user sessions after certain time in three ways. Let us see the first method.

Add the following line at the end: 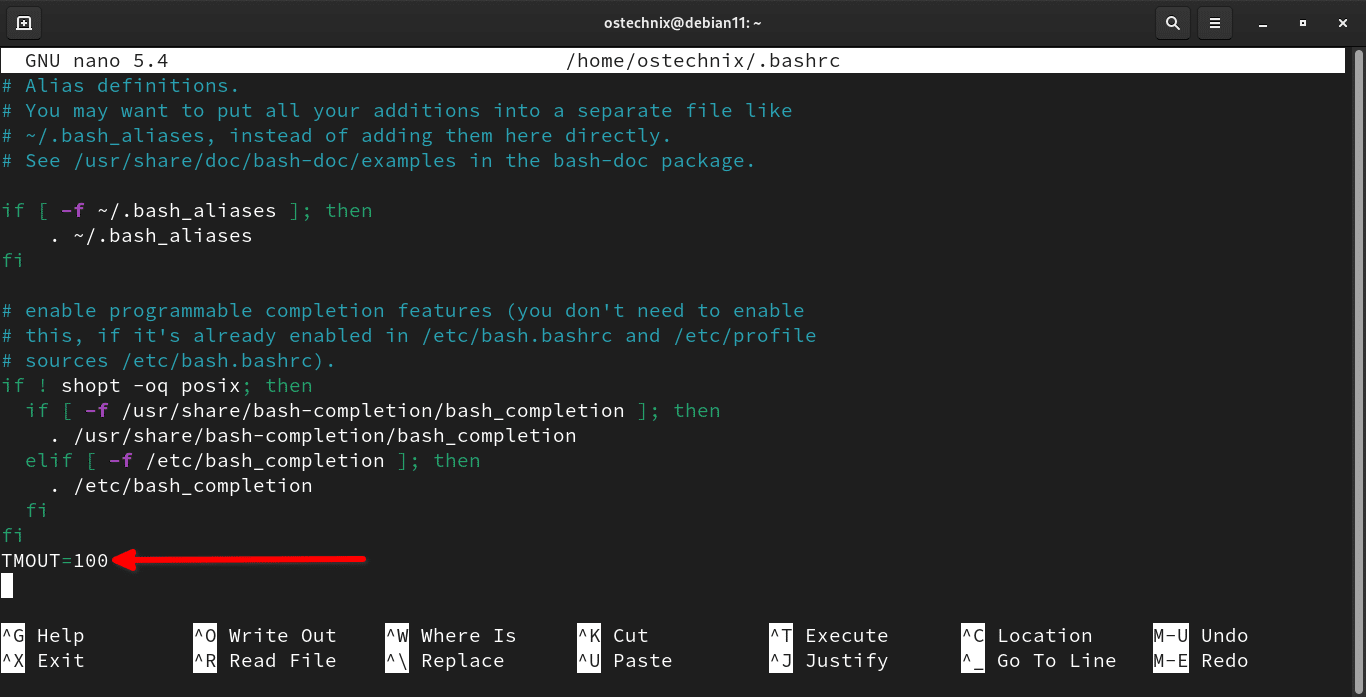 This makes the user to logout automatically after an inactivity of 100 seconds. You can define this value as per your convenient. Press ESC and type :wq to save the file and close it.

Apply the changes by running the following command:

Now, leave the session idle for 100 seconds. After an inactivity of 100 seconds, you will see the following message and the user will be automatically logged out from the session.

To modify or delete the timeout settings, simply delete the lines added above and apply the changes by running the following command:

Alternatively, the user can disable this by running the following commands:

Since the timeout setting is stored in the user-owned ~/.bashrc file, s/he can easily bypass it by simply deleting the line. If you want to prevent the user from changing the settings, follow second method.

Save and close the file.

Make it as executable using command:

Logout or reboot your system for the changes to take effect.

The inactive user will automatically be logged out after 100 seconds. The normal user can't change this settings even if he/she wanted to stay logged in the session. They will be thrown out exactly after 100 seconds.

These two methods are applicable for both local session and remote session i.e the locally logged-in users or the users logged-in from a remote system via SSH.

In the next method, we are going to see how to automatically logout only the inactive SSH sessions, not local sessions.

In this method, we will only making the SSH session users to log out after a particular period of inactivity.

Press ESC key and type :wq to save and close this file. Restart sshd service to take effect the changes.

Now, ssh to this system from a remote system. After 100 seconds, the ssh session will be automatically closed and you will see the following message:

From now on, whoever access this system from a remote system via SSH will automatically be logged out after an inactivity of 100 seconds.

How To Quickly Transfer Large Files Over Network...

How To Remove Unnecessary Configuration Files On Debian-based...

The fc Command Tutorial With Examples For Beginners

Horrible idea. If someone is this intent on exerting this amount of control over users, why provide any accounts at all? And while at it, air gap the system and get it off the net. IT policy gone bad.

As stated in the guide, the user who is not active after certain time, for example 30 mins, will be logged out. I don’t see anything wrong here.

How can I check the session timeout configured on a linux server?

Hello! I am trying to only log out, not suspend the machine. After it logs out to the login screen, it prompts again that “you’ll be logged out for inactivity” and suspends the entire machine. Is there a way to only log off the inactive user?

The instructions posted in this article will make the inactive users to forcibly log out after certain period of time. It doesn’t suspend the machine. The system won’t suspend, at lease in my case.