How To Disable Unattended Upgrades On Ubuntu

I have different versions of Ubuntu VMs for testing purposes. As you may already know, Ubuntu has a feature named Unattended Upgrades, which installs the latest security (and other) updates automatically whenever they are available. It comes preinstalled and enabled by default in the recent Ubuntu versions.

While this feature helps to keep the Ubuntu system up-to-date, it also quite annoying some times. When I am about to install a new application as soon as I logged in to my Ubuntu VM, I always get this message:

Unable to acquire the dpkg frontend lock error in Ubuntu

This is because the unattended upgrades process is running in the background and it is downloading and installing the security updates. I can't perform apt operations until this process is complete.

This is OK if the update size is small. But If I run the VM after one or two months, the size of the updates is big and it takes really a long time to complete.

It also doesn't let me to reboot or shutdown my system when I am in a hurry. This is what I get if I try to shutdown or restart my Ubuntu system: 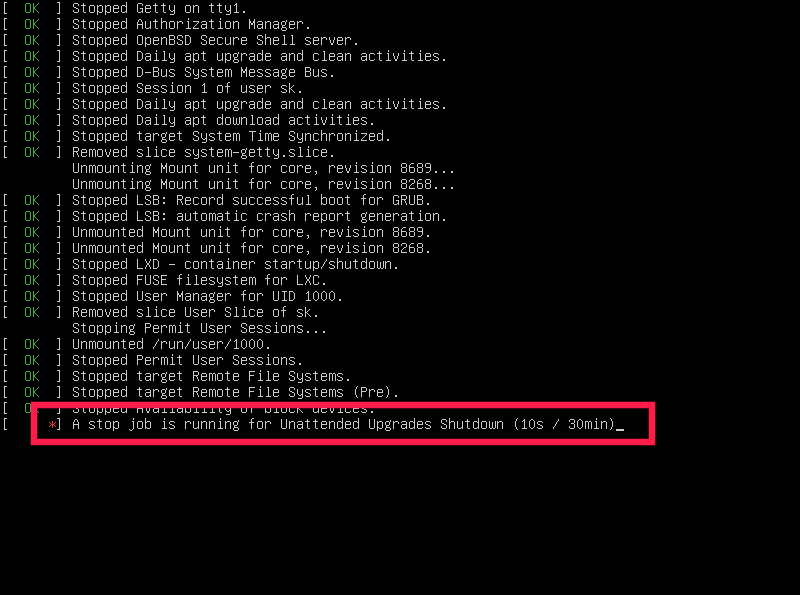 A stop job is running for Unattended Upgrades Shutdown

Even I forcibly reboot the system, I get the following error when try to install any applications.

I don't know about you, but it is quite annoying feature for me. This happened to me so many times. Every time, I had to wait several minutes before performing an apt operation.

If you're like me and annoyed of this feature, you can disable this feature as described below.

To disable unattended upgrades on Ubuntu and its derivatives, run:

Choose No and hit ENTER to disable unattended upgrades. 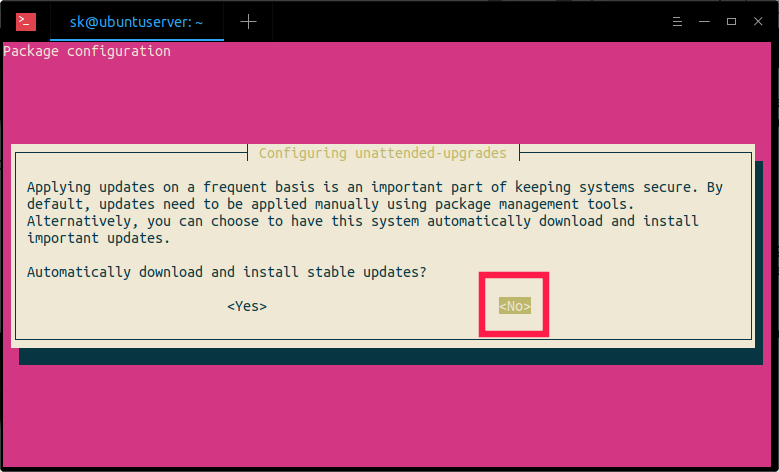 You can also remove it altogether if you don't want it anymore.

It doesn't remove any other software on your Ubuntu system, so it is safe to remove unattended upgrades package.

The Unattended Upgrades feature is enabled by default and it runs at system boot without user's permission. This might be helpful for casual users who wants to keep their system up-to-date without user-intervention. But for testing systems, It is completely unnecessary, so I disabled it in all my Ubuntu VMs.

How To Install Ubuntu 20.04 LTS Server

I removed unattended upgrades months ago out of frustration, with no problems. Now I can upgrade when I want.

Thank you for sharing this. Interestingly it is not an Ubuntu-only feature. Debian has it as well.
And it makes Linux to annoy users as Windows 10 does.

Great tips, thanks! The reason we choose Ubuntu is that we want to fully control our OS, not the opposite. I am not happy with Ubuntu doing this to me.

try installing ubuntu’s own provided raspberry pi (the so called preinstalled images). as soon as you boot pi, its going to believe it hasnt been updated in months. even tho its a fresh system. now with IO rate of a sd card and 1 ghz cortex whatever, good luck waiting 5 hrs before you are allowed to work w/ apt.

Thanks. This just locked my webserver’s database while updating the mysqlclient in the middle of the day!

while it’s a great feature, it annoyed the crap out of me when working on test servers/equipment. sometimes i need to keep the same versions/kernels!!

Thank you. I just discovered this awful ‘feature’. Apps started crashing randomly. In one of the failure reports it mentioned incompatible packages. On starting a manual update was when I found it had run a partial update three days earlier as some parts of the unattended upgrade had failed. Since apps kept crashing, I rebooted. It came up on VGA mode! And only on one of the monitors! It seems it tried to update a nVidia driver and failed. So I rebooted into the earlier version of the shell thinking I might be able to fix it from there and that also is in VGA mode now.

One of the reasons I stopped using Windows many many years ago was because they assumed THEY could do things to MY machine because they thought they knew better, but often did not. I see the Ubuntu developers have now got to the same level of incorrect arrogance.

I wonder how many more hours I will waste trying to diagnose and fix this developer-created problem?

Why, why, why would anyone want a secret, silent and invisible upgrade function that does not tell you when it has failed? Twats.