We all know about GNU core utilities that comes pre-installed with all Linux and Unix-like operating systems. These are the basic file, shell and text manipulation utilities of the GNU operating system. The GNU core utilities contains the commands, such as cat, ls, rm, mkdir, rmdir, touch, tail, wc and many more, for performing the day-to-day operations. Among these utilities, there are also some other useful collection of Unix utilities which are not included by default in the Unix-like operating systems. Meet moreutilis,  a growing collection of more useful Unix utilities. The moreutils can be installed on GNU/Linux, and various Unix flavours such as FreeBSD, openBSD and Mac OS.

As of writing this guide, Moreutils provides the following utilities:

The moreutils is packaged for many Linux distributions, so you can install it using the distribution's package manager.

On Arch Linux and derivatives such as Antergos, Manjaro Linux, run the following command to install moreutils.

Let us see the usage details of some moreutils tools.

As the name implies, the Combine utility combines the sets of lines from two files using boolean operations such as "and", "not", "or", "xor".

Let me show you an example, so you can understand what exactly this utility will do . I have two files namely file1 and file2. Here is the contents of the those two files.

Now, let me combine them using "and" boolean operation.

As you see in the above example, the "and" Boolean operator outputs lines that are in file1 if they are also present in file2. To put this more clearly, it displays the common lines(Ex. is, were, there) which are present in both files.

Let us now use "not" operator and see the result.

As you see in the above output, the "not" operator displays the lines that are only in file1, but not in file2.

The "ifdata" utility can be used to check for the existence of a network interface, to get information about the network interface, such as its IP address. Unlike the built-in commands such as "ifconfig" or "ip", ifdata has simple to parse output that is designed to be easily used by a shell script.

To display the netmask only, run:

To check hardware address of a NIC:

It is somewhat similar to "tee" command.

Let us see an example of "tee" command usage.

The "Pee" command performs a similar function, but slightly differs from "tee" command. Look at the following command:

As you see in the above output, the two instances of "cat" command receives the output from "echo" command and displays them twice in the Terminal.

This is yet another useful utility from moreutils package. Sponge reads standard input and writes it out to the specified file. Unlike a shell redirect, sponge soaks up all its input before writing the output file.

Have a look at the contents of following text file.

Correct, isn't it? Of course! As you see in the above command, I have sorted the contents of the file1 in alphabetical order and saved them in a new file called "file1_sorted". But, You can do the same without creating a new (i.e file1_sorted) using "sponge" command as shown below.

Now, check if the contents are sorted in alphabetical order.

See? we don't need to create a new file. It's very useful in scripting. And the good thing is sponge preserves the permissions of the output file if it already exists.

The "ts" utility prints the timestamp to the beginning of each line in any Linux command's output.

Look at the following command's output:

Now, run the same command with "ts" utlity as shown below.

As you see in the above output, ts adds a timestamp at the beginning of each line. Here is another example.

The "Vidir" utility allows you to edit the contents of a specified directory in vi editor (Or, whatever you have in $EDITOR). If no directory is specified, it will edit your current working directory.

The following command edits the contents of the directory called "Desktop". 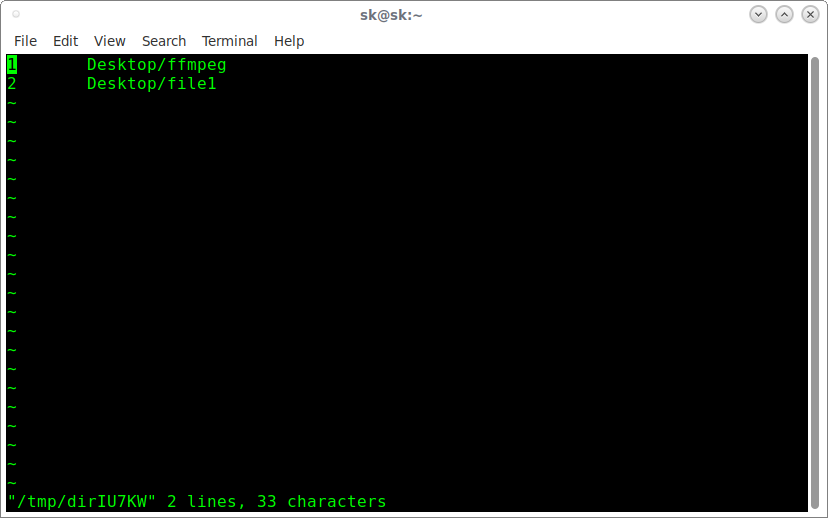 The above command will open the specified directory in your vi editor. Each item in the editing directory will contain a number. You can now edit the files as the way you do in vi editor. Say for example, delete lines to remove files from the directory, or edit filenames to rename files.

You can edit the sub directories as well. The following command edits the current working directory along with its sub-directories.

Please note the "-" at the end of the command. If "-" is specified as the directory to edit, it reads a list of filenames from stdin and displays those for editing.

If you want to edit only the files in the current working directory, you can use the following command:

Want to edit a specific file types, say .PNG files? then you would use:

This command edits only the .png files in the current directory.

The "vipe" command allows you to run your default editor in the middle of a Unix pipeline and edit the data that is being piped between programs.

The following command opens the vi editor (default editor, of course) and allows you to edit the input of the "echo" command (i.e Welcome To OSTechNix) and displays the final result.

As you see in the above output, I passed the input "Welcome to OSTechNix" to vi editor and edited them as "Hello World" and displayed the final output.

And, that's all for now. I have covered only a few utilities. The "moreutils" has more useful utilities. I already have mentioned the currently included utilities in moreutils package in the introductory section. You can read the man pages for greater detail on the above commands. Say for example, to know more about "vidir" command, run:

How To Disable Ads In Terminal Welcome Message In Ubuntu Server

How To Switch Between TTYs Without Using Function Keys In Linux

Some Alternatives To ‘top’ Command line Utility You...

How To Setup Chrooted SFTP In Linux

How To Install Rclone In Linux And Unix

How To Clear A Specific Command From Bash...

Seriously, do I need this???

Thank you so much for the great topic,