After playing with Moksha desktop for a couple of days, I uninstalled it and wanted to test a new tool. As a Linux enthusiast and technical writer, I used to test many tools everyday.

After uninstalling Moksha desktop and Bodhi desktop, I had many issues. Some software are not working after uninstall the Moksha desktop. Even, I can't update VirtualBox Extension packs to the latest version. Whenever I tried to update the Extension Pack, I got the following error: 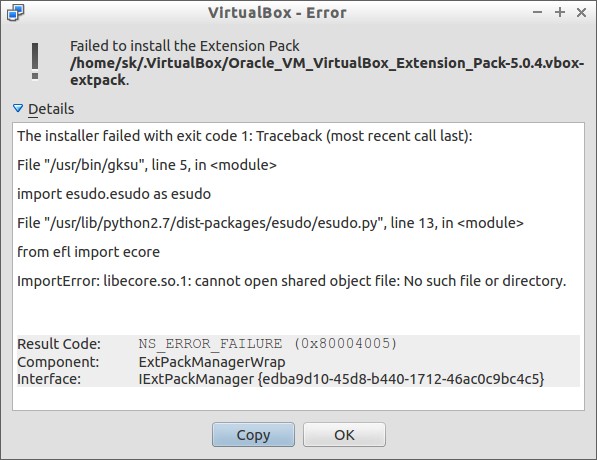 It seems the libcore package might be deleted after uninstalling Moksha desktop. I searched on the Ubuntu forums and found a workaround to fix this problem.

Then, I reinstalled the package libecore1 with command:

Check if all extensions have been properly removed using command:

Please note that you have to run the command "sudo vboxmanage extpack uninstall" until you got the "Extension packs" result as 0.

Once you removed all extension packs, download the latest extension pack from the Oracle VirtualBox site. Go to the location where you've downloaded the Extension pack and install it using commands:

Check new extension pack has been installed or not using command:

As you see in the above output, the latest version VirtualBox extension has been added.

Hope this tip will useful for you someday.

Is VirtualBox not working after upgrading to Kernel 4.4.4? Check the following link to fix it.

How To Find Hardware Specifications On Linux

How To Configure GRUB2 Boot Loader Settings In...

Glad I helped you. Keep visiting!!

Subsonic – Setup your own streaming media...

How To Fix Busybox Initramfs Error On...