Different Ways To Repeat Your Last Command In Linux

Today, I will be teaching you how to repeat your last command in Linux. You don't have to re-type the previously executed commands in your Shell. Of course, we use the UP arrow key to select the last executed commands and hit ENTER to execute them. However, there are also other a few ways to do this.  There could be many ways to repeat the last commands in Unix-like systems, but these are the only ways I am aware of now. All these commands were tested in my Arch Linux and Ubuntu 18.04 LTS desktop with BASH shell.

A word of caution: When you try the following methods, the previously executed commands will run immediately. Just make sure your last command wasn't any harmful like formatting a partition or deleting files, folders or any other important data.

How To Repeat Your Last Command In Linux

Let us run some commands first.

As I mentioned earlier, we can execute the last command by simply pressing the UP arrow and hit ENTER key. This is the most common way used by many users to execute the previous command. This method will work on all SHELL, regardless of the Linux distribution you use.

However, like I said already, there are a few other methods to do this.

Now, let me show you how to execute the last command with some practical examples.

This will execute the last command. Sample output would be:

Add "sudo" in-front of "!!" to execute the last command as root user like below.

This command will also execute the previous command:

Cool, isn't it? You don't need to type the last command completely. It could be useful  when you’ve already executed a very long command, and don't want to re-type the same command fully.

You might have run so many commands, and want to repeat a specific command. What will you do? Simple! You can do this by typing a specific word of the previous command.

To repeat previous command that starts with a specific word/letter, for example un, just type:

The above command will execute last command that starts with the letters "un".

Sample output for the above command would be:

As you see in the above example, you don't need to type the whole command (i.e uname -r). Instead, just type a few letters of the command, and any previous command that contains words will run.

Also, If you know the full command name, just type it like below:

It will execute the last command.

Let us say you want to retrieve the 1685th command, but don't want to run it immediately, add :p next to the command like below.

This will display 1685th command from the history, but won’t execute it.

Another way to do this is by searching your command line history using CTRL+R. Press CTRL+R key to search through the command line history. I personally prefer this method. It searches history interactively which I think feels safer than executing commands blindly from the BASH history. 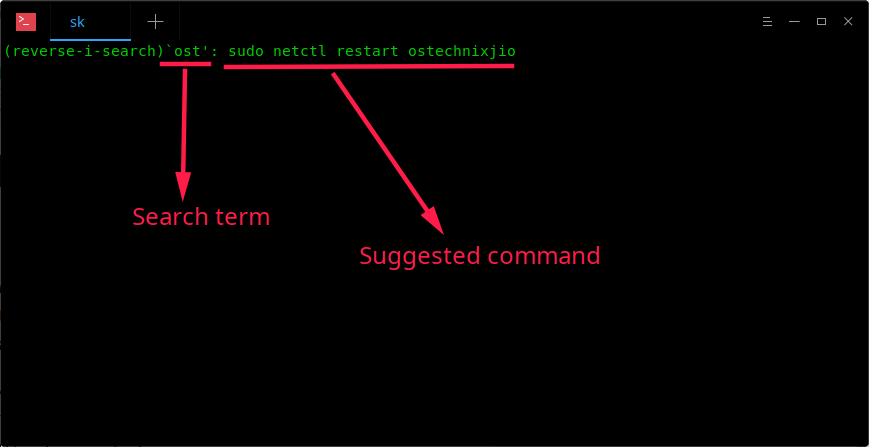 Just in case, you want to edit/modify the last command before executing it, just press the left arrow key, then edit the last command and hit ENTER to execute it. Some commands may start with same letters. In such cases, keep hitting the CTRL+R key to bring back the command you wanted to run.

Here is yet another way to run the previous command.

I don't want to type any command manually. Is there any way to repeat a last command by simply pressing a particular key(s) in my Keyboard? Yes, of course!

Press CTRL+P to switch to the last command, and then press CTRL+O to execute it. This will do the wonder. No configuration needed! You can use CTRL+O as many times as you want to keep re-executing the last commands.

This is another way to repeat the last executed command. The 'fc' command is used to list, edit and re-run the previously entered command.

As one of our reader said in the comment section, we can also use ALT+. keys (press ALT and then press .) to retrieve the last command without running it. However, there is one limitation. Hitting ALT+. will only retrieve the last argument in the command. For example, if your previous command is "uname -r", it will bring back the -r argument, but not the entire command.

And, that's all. You know now how to repeat your last command without typing it in the Terminal. If you want to view the output of your last commands without actually having to retype them, these methods will help.

If you know any other methods, please let me know in the comment section below. I will check and update the guide accordingly.

You know now how to repeat a previously executed command. How do you repeat a Linux command or program until it succeeds? Well, that's easy! Refer the following guide for more details.

How To Find Which Service Is Listening On...

How To Parse And Pretty Print JSON With...

How To View Significant Events In World History...

How To Magnify Screen Areas On Linux Desktop

Thanks. Good information.
However, it’s mentioned at the beginning that arrow UP key will work ON ALL. it doesn’t work for me. I get this : ^[

Thanks for the tip Fabian.

Here is another tip based on your suggestion. If you don’t want to automatically run a n’th command from history,add :p like below.

This will display 1360th command from the history, but won’t execute it.

Hi,
Thanks a lot

You can also hit ALT dot (Alt+.) to get last command wo/ running it

Yes, but it will only retrieve the last argument in the command. For example, if your previous command is uname -r, hitting ALT+. will bring the -r, but not the entire command.

doesn’t work for me, perhaps because alt is sending escape aswell

here’s an sequel to your tip
!1360 will not only print the 1360th command it will also add it to your bash history