Automatically Wake Up Your Linux System From Sleep Or Hibernation Mode

A word of caution:

Please note that RTC stands for real-time clock. It is actually your hardware clock which can be set in your BIOS. If you have CMOS battery or bios problem, this command will not work. You need to set correct time in BIOS to use rtcwake properly. Also, you need to be careful while using this utility, because it requires root permission to work. Any misuse of this utility may crash the Kernel and/or system.

Rtcwake comes pre-installed with most Linux operating systems by default, so don't bother installing it. Let me show you some practical examples. I tested the following commands on my Arch Linux desktop, and they worked well as I expected.

The typical syntax of rtcwake command is:

Wake up system after a specific time

First of all, make sure you have closed any running programs or saved any opened documents before running this program. The rtcwake command requires root permissions to work.

Let us now suspend our system and wake it up after 60 seconds. To do so, run: 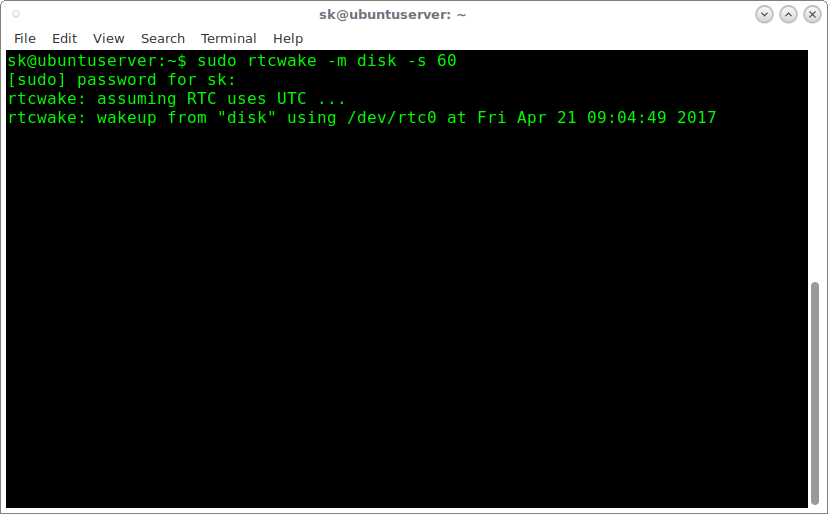 Wake up system at a specific time

We can also wake our system up at a specific time using -t option as shown in the below example.

Useful Tip: To learn what each argument in a Linux/Unix command does, check out Explainshell.

If you want to wake up your system tomorrow at a specific time, the command would be:

The above command will wake up your system at 10 am tomorrow, but won't suspend it immediately.

To wake up your system at a specific date and time:

Additionally, you can run a specific program after waking your system up using "&&" operator as shown in the following example.

The above command suspends our system to RAM and wakes it up after 60 seconds and launches the chromium web browser. Cool, isn't it?

And, that's all. Now, you know how to wake up your computer running with Linux automatically at or after specific time from sleep or hibernation.

How To Create A Montage From Images In...

How To Find And Delete Duplicate Files In...

How To Find And Delete Broken Symlinks In...

How To Convert PDF Files To EPUB Format...

If like me you find that rtcwake wakes instantly instead of at the correct time, try this:

With some USB keyboards the bus can take a while to settle down after you hit enter.

I’m going to go file a bug against rtcwake to check whether stdin is a tty and if so, wait a second or three.