Limit The Number Of SSH Logins Per User/Group/System

As you probably know, we can SSH into a remote Linux system by the same user multiple times. There is no limit! You could simply open multiple Terminal windows (or multiple tabs in the Terminal) and initiate multiple SSH sessions from each tab by the same user account. What if you want to change this behaviour? For example, you might want to allow only one active SSH session for an user. That's what we are going to see now. This brief tutorial explains how to limit the number of SSH logins per user or group or system on Linux.

In most Linux distributions, there is a file called limits.conf where you can define the maximum number of concurrent SSH sessions for an user or group of users. If the particular user tries to SSH into the system more than the allowed SSH logins, he/she will be denied access.

Go to your remote system and edit /etc/security/limits.conf file with sudo or root user:

To limit the number of concurrent SSH sessions for a specific user, for example ostechnix, Add the following line at the end: 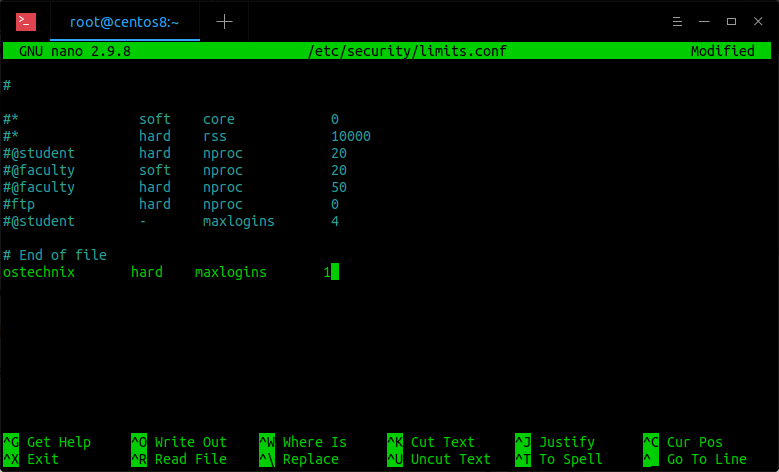 If you want to limit the number of SSH connections for a group of users, add this:

Replace @mygroup with your group name. In this scenario, all users in the mygroup can't login via SSH more than once.

If you want to limit SSH sessions of all users (global) in the system, add this line instead:

Here, the asterisk means global (i.e. all users in the system). Once you defined the maximum number of SSH sessions per user/group or the whole system, save and close the file.

Now try to SSH to the system with the same user more than one time. You will see an error message like below.

As you see in the above output;

In this example, we restricted the total number of active SSH sessions for a user or group or all users in the system. It is also possible to limit the SSH sessions per system-basis. For example - we can allow only one SSH login from a system, not per the user or group.

To limit the total number of active SSH connections per system, add the following line in /etc/security/limits.conf file:

Here, maxsyslogins refers the maximum number of logins on the system, not per-user or per-group.

Try to SSH into the system and you can't access the system more than the maximum number of allowed logins on the system.

See? The user "ostechnix" can't even SSH for the first time. Because, the total number of allowed SSH login is only one for the system. This time the SSH connection made by the root user has also been taken into account. So the maximum number of SSH logins has crossed the defined limit and the user "ostechnix" was denied access. Hope you understand.

Please note that this restriction applies for the normal users only. The root user can still able to login via SSH any number of times.

Autostart Tmux Session On Remote System When Logging In Via SSH

Of course, this affects all logins. And while in our “network” dependent world, we might view ssh logins at “the only way”, if you need to just restrict ssh and not all other sources of login, there are more precise ways.

(let’s just say, I wouldn’t put this on an exam in this form)

Yes, you’re right. Since I mostly access servers via SSH, I found this method very easy and effective.

And does that prevent opening multiple sessions with multiplexing?
https://blog.scottlowe.org/2015/12/11/using-ssh-multiplexing/