Home FAQ How To SSH Into A Particular Directory On Linux

How To SSH Into A Particular Directory On Linux

Have you ever been in a situation where you wanted to SSH to a remote server and immediately cd into a directory? Yes? Well, you're on the right track! This brief tutorial describes how to directly SSH into a particular directory on Linux. Meaning - we can automatically change to a particular directory when log in to a remote system via SSH.  Not just SSH into a specific directory, it is even possible run any command immediately right after connecting to the remote server over SSH.

SSH Into A Particular Directory Of A Remote Linux System

Before I knew this method, I would usually first SSH into the remote remote system using command:

That's how I change in to a directory in a remote system. Not anymore! No need to use two separate commands!!

The above command will SSH into a remote system (192.168.225.52) and immediately cd into a directory named '/home/ostechnix/dir1' directory and finally leave you at the remote system's shell.

Here, the -t flag is used to force pseudo-terminal allocation, which is necessary for an interactive shell. If you don't specify this flag, then no prompt will appear. And also if you don't add " bash" at the end of the above command, the connection will get terminated and return control to the local system.

Here is the sample output of the above command:

Here are a few more example commands to SSH into a particular directory:

In the above examples, I have explicitly mentioned bash as login shell. Because, I know that Bash is is the default shell in my remote system. If you don't know the shell type on the remote system, the use the following command:

Create a directory on remote system and automatically SSH into it

If you try to SSH into a directory that doesn't exists in the remote system, you will see the following message upon successful authentication:

As you can see, the directory named "dir2" is not available in the remote system. If you want to create a directory in a remote system and automatically cd into it over SSH, simply run the following command from your local system:

If you don't want to type the above commands manually every time, just add the command(s) you wanted to run after connecting to an SSH server on the remote system's ~/.bashrc or ~/.bash_profile  or ~/.profile files.

Add the command(s) one by one. In my case, I am adding the following line: 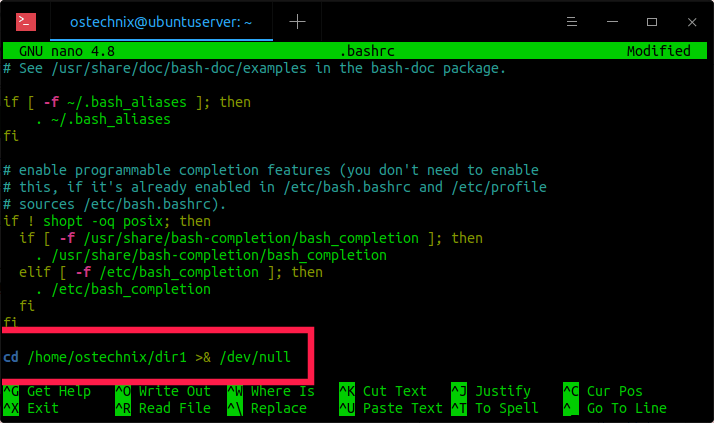 Please note that you should add this line on the remote system's .bash_profile or .bashrc or .profile file, not in your local system's. Press Ctrl+O and hit ENTER to save and press Ctrl+X to close the file.

Finally, run the following command to update the changes:

From now on, whenever you login (either via SSH or direct), the cd command will execute and you will automatically land inside the "/home/ostechnix/dir1" directory. 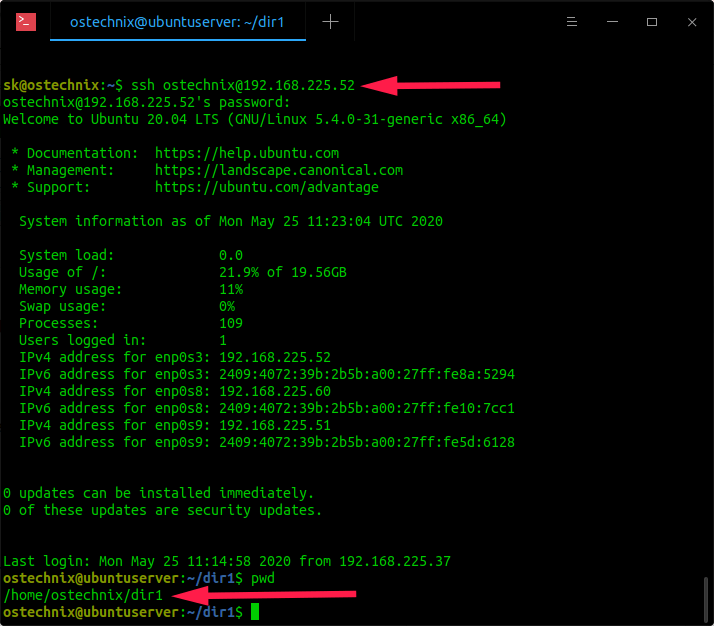 Like I already said, this trick is not just to cd into directory after connecting to a remote system. You can also use this method to run other commands as well.

For example, the following command will land you inside '/home/ostechnix/dir1' directory and then execute 'uname -a' command.

More examples on executing commands over SSH on remote systems are given in the following guide.

Recreate Debian Binary Packages That Are Already Installed On A System

How To Monitor User Activity In Linux