We all know that when we delete a file/folder, they will be moved to a temporary location called 'Trash' or 'Recycle bin'. We can delete the contents of Trash permanently or restore them if we need them later. This is how we use graphical Trashcans. However, If you're a heavy command-line user and looking for a command-line alternative way to use Trashcan from the Terminal, you need to check 'Trash-cli' utility.  Trash-cli is a commandline trashcan for Unix-like systems. It uses the same trashcan used by GNOME, KDE, and XFCE, but we can use it right from the Terminal. Using trash-cli, we can delete, restore items as the way we do in the graphical Trashcan.

In this brief tutorial, we will be discussing how to install and use 'Trash-cli' utility in Linux.

Trash-cli is available in the default repositories of most Linux distributions.

To install it on Arch Linux and its derivatives:

On Fedora and other RPM based systems:

If Trash-cli is not available on the repositories, you can compile and install it from sources.

To install it on system-wide, run the following commands one by one.

Download - Free eBook: "6 Things That Ubuntu Does Better Than Windows"

Allow me to show you some examples, so you can understand how it works!

To send a file named 'file.txt' to trashcan, run:

Similarly, we can trash a directory using command:

You can verify it whether the files or folders have been sent to the trashcan in your file manager. 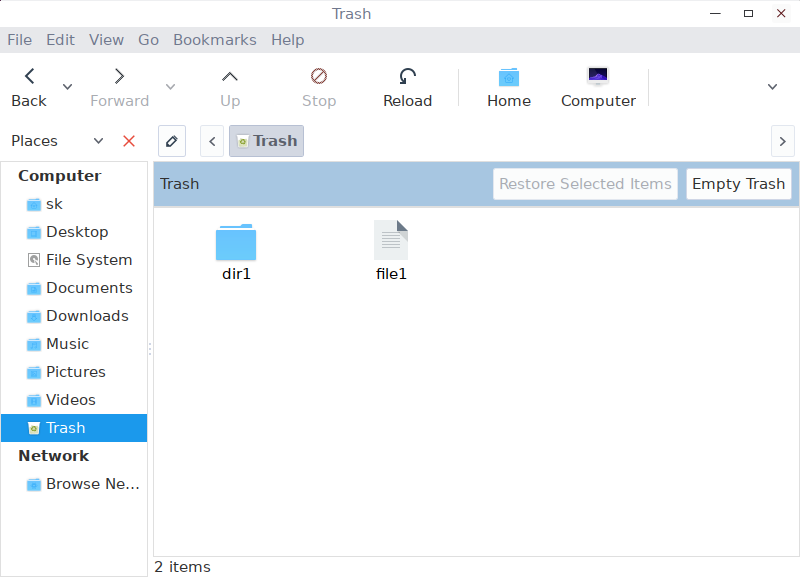 As you see in the above output, file1 and dir1 have been sent to Trash folder.

To view the contents of your Trashcan from Terminal, run:

You can restore deleted items at any time using command:

It will ask you which file you'd like to restore. Just enter the number (0 or 1 in our case). The respective file will be restored. I wanted to restore dir1, so I entered 0(zero).

now, the selected item will be restored.

To empty all items in the trashcan, you can use:

Also, you can remove a single folder/file from the Trashcan as shown below.

The above command will permanently delete the specified item i.e. file1.

You know now how to use trashcan from the commandline using trash-cli utility. Hope you find it useful.

Pacli – An Interactive BASH Frontend For Pacman And Yaourt

How To Optimize Laptop Battery Life With TLP...

neat, kind of want them to make it… rm (as alias or symlink) compatible, no more accidents, lol

“you can permanently _restore_ individual item as shown below.

oops, this is gonna be a painful experience lol. please fix the text =)

Fixed it. Thank you.

This is so incredibly useful. I can’t believe I’m a Linux veteran and I had no idea this package even existed, until now. Thank you so much.

after googling it seems the command is restore-trash

Ha…I wonder if its ubuntu specific?

Anybody know where the files are stored? Is this a script error?

In my case, as I have both trash-cli and gnome-shell I have this alias:

The GIO is a kind of API for gnome shell
https://en.wikipedia.org/wiki/GIO_(software)