There are many GUI-based popular media players available, such as VLC, SMPlayer (A graphical front-end for Mplayer). But console-based players are only a few. Cmus (C* MUsic Player) is one among them. It is a small, fast and powerful console music player that plays audio files from Terminal in Unix-like operating systems. Unlike other graphical music players, Cmus can start and play music files instantly, even if there are thousands of audio files. It supports most audio formats, including Ogg Vorbis, MP3, FLAC, Opus, Musepack, WavPack, WAV, AAC, MP4, audio CD, WMA, APE, MKA, TTA, SHN, and libmodplug. Cmus will work on almost all modern GNU/Linux operating systems.

The notable features of Cmus are,

In this guide, we will see how to install and use Cmus console player in GNU/Linux.

Cmus is available in the default repositories of most Linux distros. So, installing Cmus is not a big deal.

On Arch Linux and its derivatives, you can install it using command:

First enable PackMan repository as described in this link.

And then, install it using command:

Just in case if Cmus is not available on the default repositories, you can compile and install it using Linuxbrew. To install Linuxbrew on your Linux system, refer the following guide.

After installing Linuxbrew, run the following command to install cmus.

How to use Cmus console music player

We are going to see how to use Cmus in the following chapters.

You can launch Cmus by typing the following command from the Terminal:

When you first launch Cmus, it will open to the album/artist view as shown below. 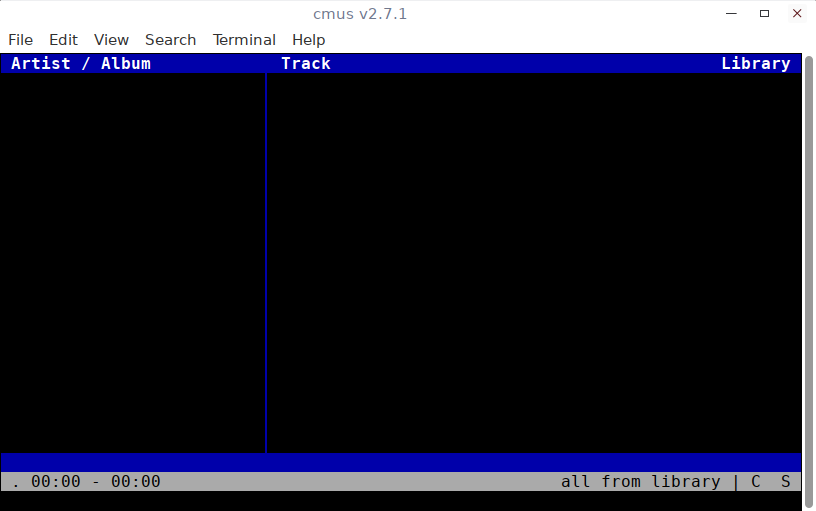 As you see above, there are no media files. We need to manually add them.

Press '5' (Number five) to switch to the file-browser view. 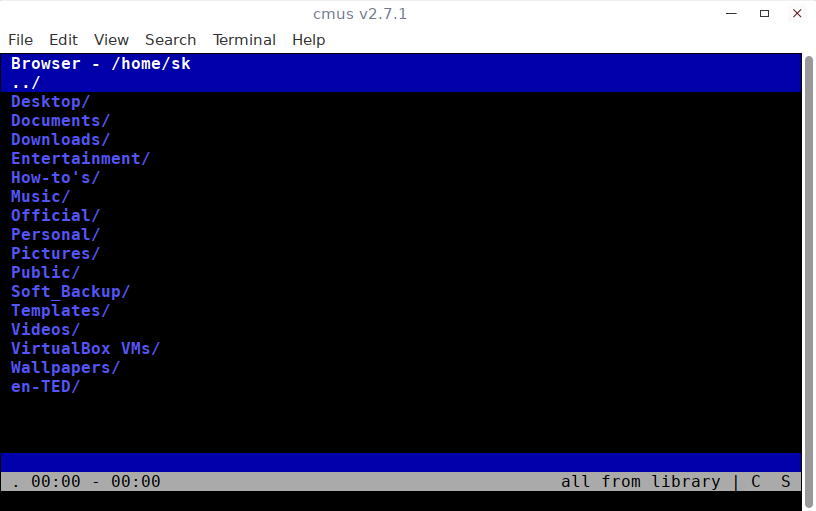 Use following keys to navigate to where you have audio files stored.

Highlight the file or folders that contains the audio files and press 'a' to add audio files to library.

Once you have added the audio files from one folder, the cursor will move to the next folder automatically. If you have audio files in that folder, just press 'a' to add them to the music library, else use arrow keys to move back and forth to search and add files.

Now, we have added the audio files. Let us go ahead and play them.

Once you have added all music files, press 1 (Number one) to view the library. The music library should look like below.

As you have seen in the above screenshot, artist/albums are sorted in alphabetical order on the left side, and audio files are on the right side.

To switch to simple library-view, press '2' (Number two). It will only display the audio tracks in alphabetical order. 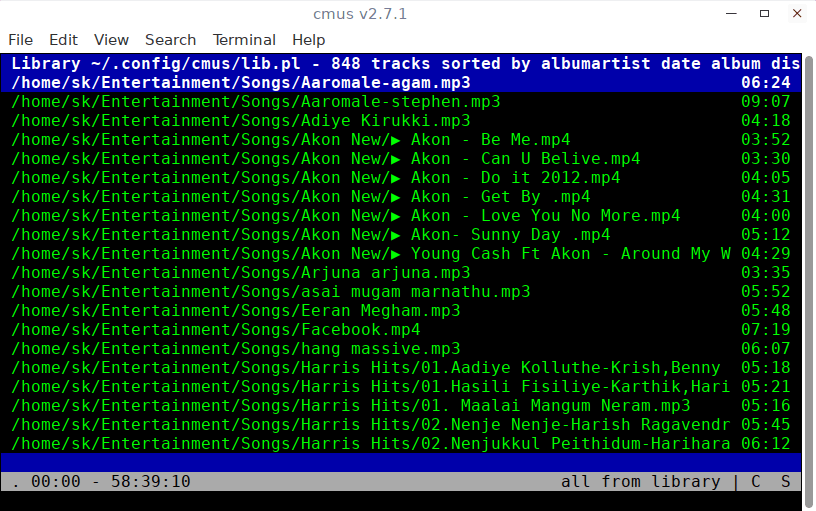 You can use the up and down arrow keys to select a track you'd like to hear, and press Enter to play it.

Here is Cmus player in action.

Here is list of keyboard shortcut keys to use Cmus.

Let us say you're listening a song and you want to select which song should play next, without interrupting the currently playing song. That's easy! Simply go to the any song you'd like to play and press 'e'. The selected song will start play once the current song is finished. You can view and edit the queue at any time by pressing '4' (Number four). 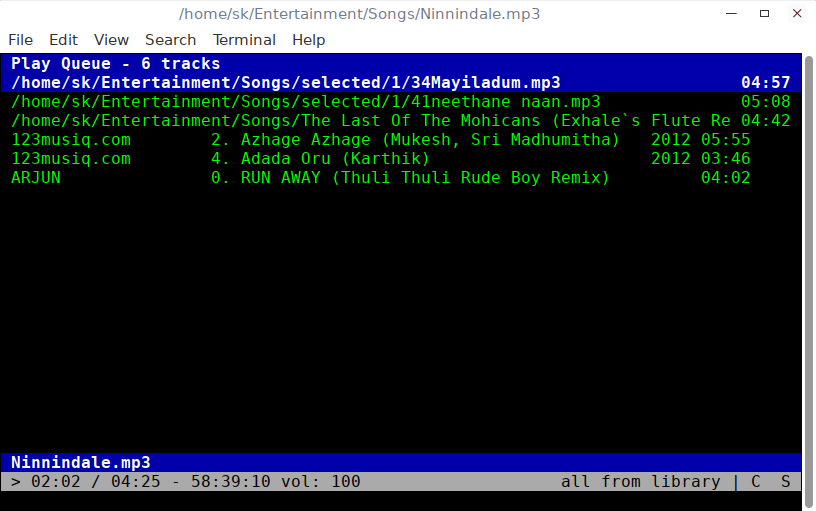 You can also change the order of the tracks with the 'p' and 'P' keys.

To remove a track from the queue, press shift-D.

To search a specific track type slash (/) followed by the search string and press ENTER to select the particular track. For example to search for a song named "Akon", type - /Akon. Press 'N' and 'n' to move up and down if there are more songs with same search term. 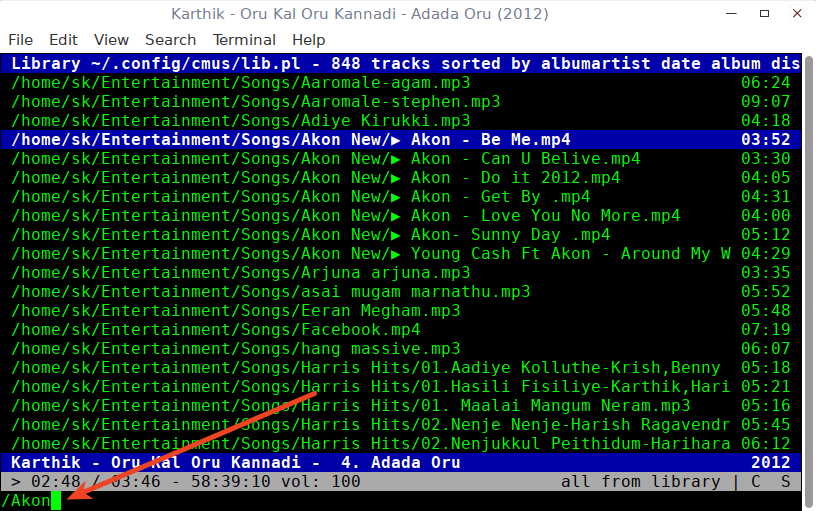 You can tweak Cmus as per your liking. You can customize Cmus, like changing the way tracks are displayed, enabling replay gain support or changing the keybindings.

To view current settings/keybindings, press '7' (Number seven). You should see the following screen. 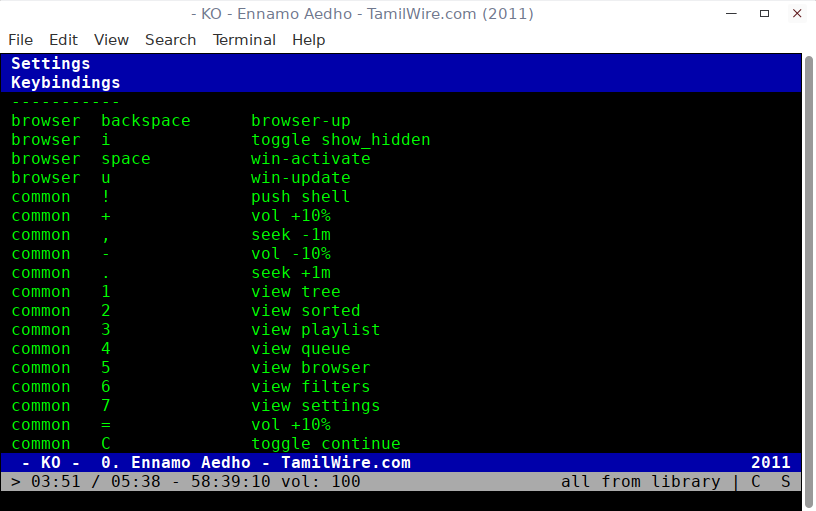 To change a setting or keybind, just select it using up and down keys and press enter. This will put the command for the current setting in the command now (bottom left of your screen), which you can edit to put in a new value/key as you wish.

That's all for now folks. I have covered only the basic usage of Cmus. There are more features and commands which are not covered in this guide. For more details, I suggest you to refer the Cmus website given at the end of this article or refer the man pages.

How To Get Instant Coding Answers Via Commandline In Linux

How To Backup And Restore Files Using BorgBackup...

How To Backup And Restore Data Using Restic...

The Top Command Tutorial With Examples For Beginners