Home Linux The Uniq Command Tutorial With Examples For Beginners

The Uniq Command Tutorial With Examples For Beginners

If you're working mostly on command line and dealing with a lot of text files every day, you should be aware of Uniq command. This command helps you to find repeated/duplicate lines from a file easily. It is not just for finding duplicates, but also to remove the duplicates, display the number of occurrences of the duplicate lines, display only the repeated lines and display only the unique lines etc. Since the uniq command is part of GNU coreutils package, it comes preinstalled in most Linux distributions. So, let us not bother with installation and see some practical examples.

Please note that the 'uniq' command will not detect repeated lines unless they are adjacent. So, you might need to sort them first or combine the sort command with uniq to get the results. Allow me to show you some examples.

First, let us create a file with some duplicate lines.

As you see in the above file, we have few repeated lines (the first, second, third, and fifth lines are duplicates).

If you use 'uniq' command without any arguments, it will remove all consecutive duplicate lines and display only the unique lines.

See? There are no duplicates or repeated lines. In other words, the above command will display each line once from file ostechnix.txt. We used the sort command in conjunction with uniq, because, as I already mentioned, uniq will not find the duplicate/repeated lines unless they are adjacent.

3. Display only unique lines from a file

To display only the unique lines from a file, the command would be:

As you can see, we have only two unique lines in the given file.

Similarly, we can also display duplicates lines from a file like below.

These two are the repeated/duplicated lines in ostechnix.txt file. Please note that -d (small d) will only print duplicate lines, one for each group. To print all duplicate lines, use -D (capital d) like below.

See the difference between both flags in the below screenshot. 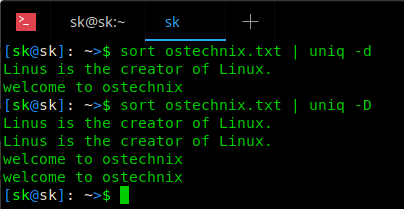 5. Display number of occurrences of each line in a file

For some reason, you might want to check how many times a line is repeated in the given file. To do so, use -c flag like below.

We can also display number of occurrences of each line along with that line, sorted by the most frequent using command:

6. Limit the comparison to 'N' characters

7. Avoid the comparison with the first 'N' characters

Like limit comparison to N characters of lines in a file, we can also avoid comparing the first N characters using -s flag.

The following command will avoid the comparison with the first 4 characters of lines in a file:

To avoid comparing the first N fields instead of characters, use '-f' flag in the above command.

How To Find The Installed Proprietary Packages In Arch Linux

How To Install Nim Programming Language On...