The Fold Command Tutorial With Examples For Beginners

Have you ever found yourself in a situation where you want to fold or break the output of a command to fit within a specific width? I have find myself in this situation few times while running VMs, especially the servers with no GUI. Just in case, if you ever wanted to limit the output of a command to a particular width, look nowhere! Just use fold command! The fold command wraps each line in an input file to fit a specified width and prints it to the standard output.

In this brief tutorial, we are going to see the usage of fold command with practical examples.

The Fold Command Tutorial With Examples

Fold command is the part of GNU coreutils package, so let us not bother about installation.

The typical syntax of fold command:

Allow me to show you some examples, so you can get a better idea about fold command. I have a file named linux.txt with some random lines.

To wrap each line in the above file to default width, run:

80 columns per line is the default width. Here is the output of above command:

As you can see in the above output, fold command has limited the output to a width of 80 characters.

Of course, you can specify your preferred width, for example 50, like below:

Instead of just displaying output, we can also write the output to a new file as shown below:

The above command will wrap the lines of linux.txt to a width of 50 characters, and writes the output to new file named linux1.txt.

Let us check the contents of the new file:

Did you closely notice the output of the previous commands? Some words are broken between lines. To overcome this issue, we can use '-s' flag to break the lines at spaces.

The following command wraps each line in a given file to width "50" and breaks the line at spaces:

See? Now, the output is much clear. This command puts each space separated word in a new line and words with length > 50 are wrapped.

In all above examples, we limited the output width by columns. However, we can enforce the width of the output to the number of bytes specified using -b option. The following command breaks the output at 20 bytes. 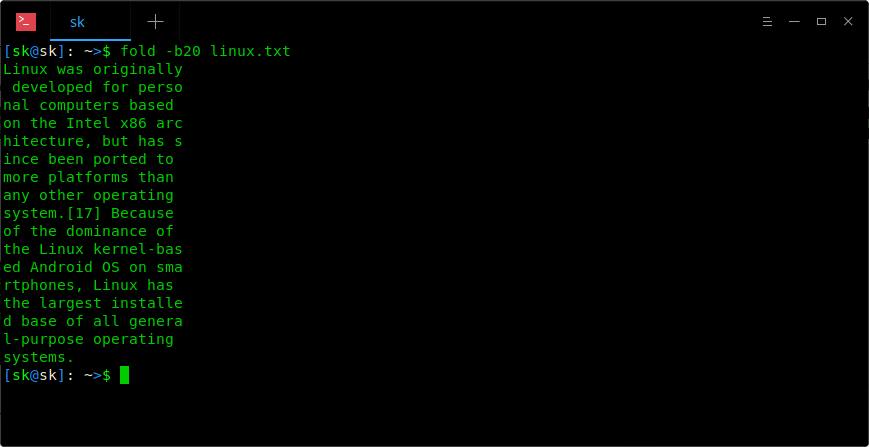 Setup A Private Server With ownCloud, Kopano And Let’s Encrypt On UCS

How To Run All Programs In A Directory...

How To Convert Arch Linux Packages To AppImage...

How To Configure X11 Forwarding Using SSH In...