Today, I am going to teach you how to create a list of installed packages and install them later from the backup list in a new system or in Arch Linux system after doing a clean installation. This method can be useful for error reporting or discussion of installed packages with your colleagues or Technical support team. More importantly, if you want similar set of packages in a group of Arch Linux systems, this is one such a way to achieve it.

This command will create a list of explicitly installed packages in alphabetical order and save them in a text file called "pkglist.txt".

Save the "pkglist.txt" file in USB drive or somewhere safe.

Now, format and reinstall the system. After reinstalling your system, copy the "pkglist.txt" file to your newly installed system and run the following command to install packages from the backup list.

Just in case, the backup list includes foreign packages, such as AUR packages, remove them first, and then install the rest of packages using command:

The above command will you remove the foreign packages. Type 'y' and hit ENTER to remove them. Finally, type 'y' to install the rest of the packages from the list. 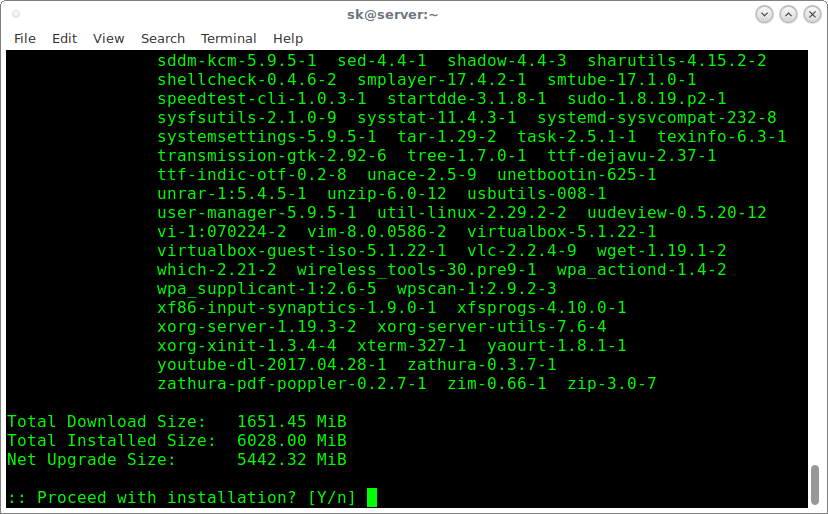 You don't need to install all packages one by one. Pacman will read the list and install packages listed in there.

To remove all the packages on your newly installed system that are not mentioned in the backup list, run:

This handy method will make your life easier when you want to reinstall your Arch Linux system or its derivatives like Antergos, Manjaro Linux. Don't bother installing packages one by one. Just export the list of installed packages to a file, and save it to a safe place, and then install the packages from the backup list after reinstalling your Arch system. You can also use the same backup list to any newly installed Arch Systems on your home/office. It will save you a lot of time from searching and installing packages one by one.

Want to know how to do the same in YUM based and DEB based systems? Great! Refer the following guide.

How To Split And Combine Files From Command Line In Linux

How To Enable Timestamp In Bash History In...

How To Find Vulnerable Packages In Arch Linux

How To Zoom Tmux Panes For Better Text...

Does a similar article exist for Debian-family (*buntu, Mint, etc) package managers? My search efforts only found this article.

Maybe this one helps. https://ostechnix.com/create-list-installed-packages-install-later-list-centos-ubuntu/

Works but doesn’t play nice afterwords with maintenance commands like;
sudo pacman -Rns $(pacman -Qtdq)
sudo pacman -Sc
sudo paccache -rk 1
sudo paccache -ruk0
It’s as if the packages are not registered in the pacman as installed and being used database or whatever and are treated as not needed/not used packages by pacman, you can test the listed commands above and see what I mean jest “don’t” press “y” especially with the first one.