How To Clean Up Junk Files In Ubuntu Using Ubuntu Cleaner

One common thing we forget to do in our Ubuntu system is to clean up the junk files regularly. Sooner or later, we realize that our hard disk is running out of space. There are many ways to cleanup the junk files. We can manually delete the unnecessary files, old kernels. However, there are few useful applications available to make this task easy. A while ago, we have covered how to delete old kernels effectively using purge-old-kernels utility. In this brief tutorial, we are going to learn how to clean up junk files in Ubuntu and its derivatives like Linux Mint, Elementary OS etc., using Ubuntu Cleaner.

Ubuntu Cleaner will remove the following in Ubuntu and its derivatives:

Once installed, launch it either from Unity Dash or Menu.

The default interface of Ubuntu Cleaner will look like below.

Select the files you want to clean up and hit the Clean button on the lower right corner. 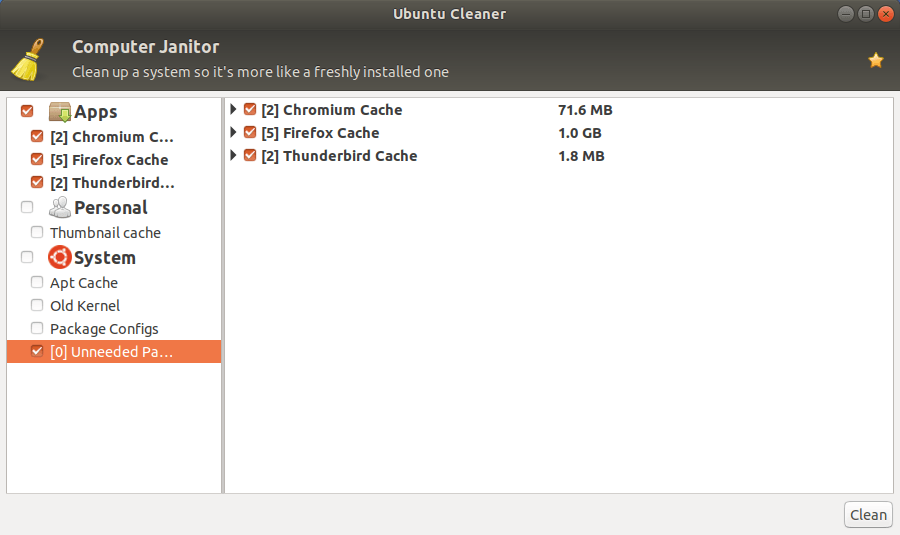 Ubuntu Cleaner will start to clean up the files you have selected.

Congratulations! Your Ubuntu system is free from junk files.

Now, your system became like a freshly installed one.

Not happy with Ubuntu Cleaner?, run the following commands to remove it (I think you won't).

And finally remove the PPA.

Is your hard drive running out of space? Just install Ubuntu Cleaner and purge-old-kernels utility and get rid of the junk files and older kernels which are no longer necessary. Both are must-have utilities in your Ubuntu system.

How To Merge PDF Files In Command Line On Linux

How To Kill The Largest Process In An...

How To Install And Configure Redis Server In...

How To Browse And Read Entire Arch Wiki...

I still have Ubuntu Tweak on my 16.04LTS computer and other than the applications tab, all parts of it still work. Iuse the Janitor before each kernel update to make room for the update. I leave the last kernal for use if the newest kernel update does not work correctly or has problems.

How is Ubuntu Cleaner improved from the Janitor?

Nothing improved as far as I tested it. The developer of ubuntu cleaner just picked up the Janitor module and released it under new name.

The program would launch and stop responding on my 6-month-old Lenovo IdeaPad w/8GB running 16.04 LTS, repeatedly. No error or warning messages from it.

Glad you posted the removal commands.

I tested it on my Ubuntu 16.04 LTS machine. It worked well. I use DELL Inspiron model laptop.

I still use Ubuntu Tweak as well on the UM 16.04. Seems to work well. Bleachbit always seems to get me in trouble.

Seems like this Ubuntu Cleaner is copletely broken, it throws one exception after another saying that some services not found. So I dont know why it dont require dependencies as every normal app does, but for me it seems quite stupid to manually search what dependencies are missing. I just thrown this program to trash. Linux Mint 17 (based on Ubuntu 14.04.5 LTS).

After many years succesfully using Ubuntu-Tweak on Ubuntu and Lubuntu machines I had to upgrade to 18.04 LTS on one 32bit machine and could only succesfully install Ubuntu-Cleaner (the Jaintor cleaning part of Ubuntu-Tweak). All went well and so did the cleaning part until it failed to remove the old kernels and old package configs, leaving the following message:

I assume that I need further permissions, i.e. to enter my admin password at this point (as was required with Ubuntu-Tweak) but unfortunately there is no option to do this. Is there a solution to this problem so that these files can be removed with the password method or perhaps does it require some further typing in the terminal to achieve the same effect…
I hope that the answer is out there somewhere – and I look foward to a solution with anticipated breath. The rest of Ubuntu-Cleaner seems fine and I am pleased to say a big THANK YOU and WELL DONE to Gerard for sticking with this project.
Thanking you in advance for any help and assistance….

Thank you SK for the heads up about running Ubuntu Cleaner from the terminal with the sudo permissio. It worked well, opened Ubuntu Cleaner and I was able to succesfully clear the old kernels and old package configs, etc. Closed the application in the normal way, which then completed the terminal command sequence and I was then able to safely close the terminal.

Just another question – instead of using the terminal each time, is it possible to use the terminal or the text editor within the app to allow it to always run from the sudo command automatically or is that a bad idea?

Once again many thanks for you help and assistance – it has been greatly appreciated. Best regards….

Glad I could help. Regards.