How To Improve The Linux System’s Security Using Firejail

As you already know, Linux kernel is secure by default. But, it doesn't mean that the software on the Linux system are completely secure. Say for example, there is a possibility that any add-ons on your web browser may cause some serious security issues. While doing financial transactions over internet, some key logger may be active in browser which you are not aware of. Even though, we can't completely give the bullet-proof security to our Linux box, we still can add an extra pinch of security using an application called Firejail. It is a security utility which can sandbox any such application and let it to run in a controlled environment. To put this simply, Firejail is a SUID (Set owner User ID up on execution) program that reduces the risk of security breaches by restricting the running environment of untrusted applications.

In this brief tutorial, we will discuss how to install firejail and use it to improve the Linux system's security using Firejail.

Concerning about Firejail features, we can list the following:

This security application is easy to install, and it can be installed using apt-get package manager. We will be using Ubuntu 16.04 OS for demonstration purpose.

All commands given below are executed as root user.

By default firejail configurations and profiles are stored under /etc/firejail. These can be manged by user as per their need, Have a look at the following output.

The typical syntax to use firejai is:

Say for example, to run Firefox web browser using firejail, we can use the following command:

To create a custom profile for a application/command create following directory under home environment of user. 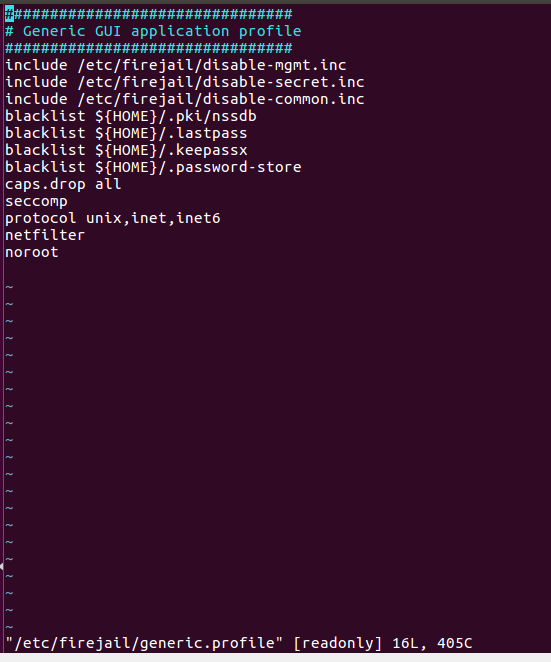 If you wants to load Document folder for a particular user to be loaded as read only. Define parameters as follows:

If you wants to set some attribute as read only:

Accessing some banking stuff over the internet is recommended  to be secured, can be achieved with firejail.

Create a directory for user.

Define default network interface for application to run with.

For the ease of user gui tool of firejail is available which can be downloaded from this link.

Download appropriate package as per your hardware and operating system installed and use it.

The filejail tool is a must have for Security concerned users. Although there are lots of methods available in Linux which can provide same level of security, Firejail is one such a way to improve the security to your Linux environment. We hope you will love this article.

An Easy Way to Protect Files From Accidental Deletion In Linux

How To Restore Or Recover Deleted Commands In...

Fix “Implementation of the USB 2.0 controller not...

How To Save Linux Commands And Use Them...

Good tutorial on a simple sandbox app. Finally, something for linux better than an idiotbox “firewall for windows” clone….

Reply Retweet Favorite
How To Fix "Implementation of the USB 2.0 controller not found!" VirtualBox Error In Linux #Virtualbox… https://t.co/1K0c4gg8bp

Reply Retweet Favorite
Nobody will ever understand the joy of a programmer. 😃 #Code #Developer #programming #Fun https://t.co/hbeG2WIorA

Moksha Desktop – The betterment of Enlightenment...

How To Search The Web From Terminal...