Everything we interact and work on, creates data in the digital world. Whatever interactions we do in the computer world will leave data as the footprint. All the files, images, audio/video files that daily we watch and use are nothing but data. End of the day we are left out with little bright “gleam” on data that we are exposed to. We are now in the pinnacle era of data access. It would be a better idea to understand data storage concepts and technologies. 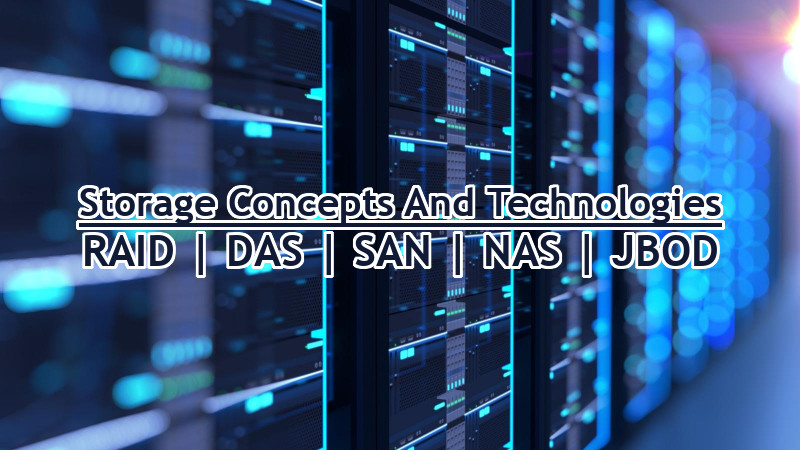 All this data will be obviously in the form for 1’s and 0’s which is nothing but binary data. This data needs to be stored somewhere and some form to access it later. This data could be needed for processing or to come-up with any insights later.

Storing data is very crucial and has led to development of many technologies. During late 1970’s and beginning of 1980’s storage saw emergence of new technologies and many developments happened during this period.

Data can be stored in many formats in any computer hardware. This completely depends on the application that is creating this data. Following are some of the well-known data storage formats and access mechanisms.

Many of the disk operations like “read” and “write” involve disk storage.

Disk storage is one of the most heavily used mechanisms as on today. In Disk storage, also many types and methods have evolved over a period.

DB storage is data storage for faster access with or without data relation. DB storage is at the software level of data storage and will involve SQL or No-SQL based data storage with Primary key and secondary key mechanisms. These data bases either will be relational and no-relational types. The scope in this article will not cover these concepts.

This mainly involves hard disk type of storage. As explained earlier, for last 20+ years or so, storage was hovering around DASD (Direct Attached Storage Device) or JBOD (Just Bunch Of Disks) types of primary storage mechanisms. DASD and JBOD were used for just read and write operations on disks. These are just collection of disks without involvement of data management or intelligence used.

RAID technology was developed keeping in mind the need of back up, faster data access and error free data with availability features. RAID was developed using combination of multiple independent hard disk drives into a single logical unit. The underlying Operating System sees all these as one single HDD (Hard Disk drive). RAID also provides with fault tolerance.

RAID has multiple features and techniques, which were developed over a period. These have been developed based on back-up, recovery and data distribution in the hard disk drive. I have explained some of the required and well-known features as below.

RAID is also classified as Software RAID and Hardware RAID.

Over a period, several RAID levels have been developed and some of the popular are:

Note: Out of these RAID, only important and most used configurations are described here with more details.

If any disk fails, all the data is lost. No fault tolerance.

If one of the disk drive fails, the data is available with other copy.

This configuration will help in disk failure in both mirror sets. The following are some of the features of RAID 10.

This configuration supports up to 2 disk failures

Note: Parity is a calculated value used to reconstruct data after a failure. While data is being written to a RAID-5 volume, parity is calculated by doing an exclusive OR (XOR) operation on the data. The resulting parity is then written to the volume. This helps in distribution of data across disks.

No data is lost even if two disk failure happens in this configuration as parity is also distributed.

Here, collection of disks, which are directly attached to Host. This is low cost model, easy to use and connect mechanism. Simple connection used here, either by using FCS (Fiber Channel) or by SCSI cabling. In some cases, HBA (Host Bus Adapter) is used along with SAS (Serial Attached Storage) also. This mechanism is not reliable and is not an efficient way to use. This mechanism is used in some cases for low cost & non-reliable models.

This technology is based on the concept of “Block level input/output” with high speed. This mechanism is very efficient, secure and reliable. This mechanism is little bit expensive as this involves lot of hardware components for connectivity, controller machines and adapters. In addition, various protocols like iSCSI, SCSI, FC, FcOE are supported and this needs some intelligence in connecting.

The above diagram is that of a simple SAN connection. As explained earlier this has been connected either using FC or iSCSI based protocols. SAN is nothing but a simple DAS, which adds all of its storage in the network and provides block oriented data access between the target storage on network and the computer system. SAN uses high speed, dedicated FC (fiber channel) network or iSCSI (which is nothing but Ethernet).

SAN has many advantages as listed below:

SAN has disadvantages as well.

The above diagram is extrapolation of Fig.3. Here, how the SAN subsystems are connected using IP network is shown. As explained previously SAN supports only Block IO based data flow and doesn’t allow File based IO
operations.

NAS is a file system virtualization storage technology which attaches to a TCP/IP based network using either LAN or WAN connection. This is accessed using specialized file access/file-sharing protocols. NAS supported on I/O requests and this is file based as compared to SAN which is based on Block level access.

NAS has the following advantages:

This is nothing but Just bunch of Disks(JBOD) connected together. Here no RAID or any such storage technology is used. Just selected group of disks are bundled and connected together as Disk Array. This JBOD is created using multiple independent hard disks and all these disks are recognized as one single HDD by the underlying operating system.

This is again low cost and inefficient model. This will be used where data security and efficiency is not that important. If the data in one of the disks is lost and this will be lost for ever.

Learning RAID, SAN and NAS concepts will help any storage engineer. Irrespective of progress of Cloud and Hyper-convergence kind of technologies, understanding fundamental storage concepts is very crucial and important. This will also help in gaining knowledge on LVM and Cloud Storage concepts. This article is mainly focused on regularly used and most prominent types of configurations.

If you find any errors and typos in this guide, feel free to let us know. We will amend and update the guide accordingly.

About the author: Shashidhar Soppin is working in Wipro as a Senior Architect having 18+ years of experience in IT industry. He specializes in Unix/Linux system programming, Virtualization, Docker, Cloud, AI-ML, Deep learning & OpenStack areas. He is an Author, blogger and has patents & written papers.
Contact: [email protected]

How To Find Top Most Used Commands On Linux

How To Display Bash History Without Line Numbers

Software Defined Storage And Object Storage In The...