This Script Helps You To Pass US Citizenship Test

Howdy non-Americans! Are you planning to apply for U.S Citizenship? Great! You may already aware that there are certain procedures to become an U.S citizen. One of them is to pass US citizenship test or USCIS civics test which will be conducted by USCIS (U.S Citizenship and immigration services) officials. There are 100 questions on the test. During the interview, you will be asked 10 questions from the list of 100 questions in English. You must at least answer 6 questions correctly out of 10 to pass the test. All questions and answers to pass the USCIS civics test have been published in the official USCIS website for free. There is also a simple script named "USCIS Quiz" which will help you to prepare for this exam.

This script will display all questions and answers to USCIS civics test in flash-card format in a random order. You can install it on your system and practice them before appearing the naturalization test. All questions with answers are current as of 2017. It is freely available on GitHub. Just clone and install it as described below.

Install Git and pip3 first. Both are available in official repositories of most Linux distributions, so you can install them using the default package manager.

On Arch Linux and its variants like Antergos, Manjaro Linux, you can install pip and git using command:

And then run the following command to install pip:

Since setup-tools package is available in the default repositories, you can install it using command:

For more details about pip, refer the following link.

After installing Git and pip, clone the USCIS Quiz repository as shown below.

This will clone the contents of USCIS Quiz script in a directory named "uscis-quiz" in the current working directory. Cd to that directory:

Finally, install it as shown below.

Please mind the dot (.) at the end of the above command.

You can also install it with the following alternative command.

The script is installed now. Go to the section to know how to use it.

Type the following command to start the test.

You will see the questions along with its answers in random order. To move to next question, simply hit ENTER key. 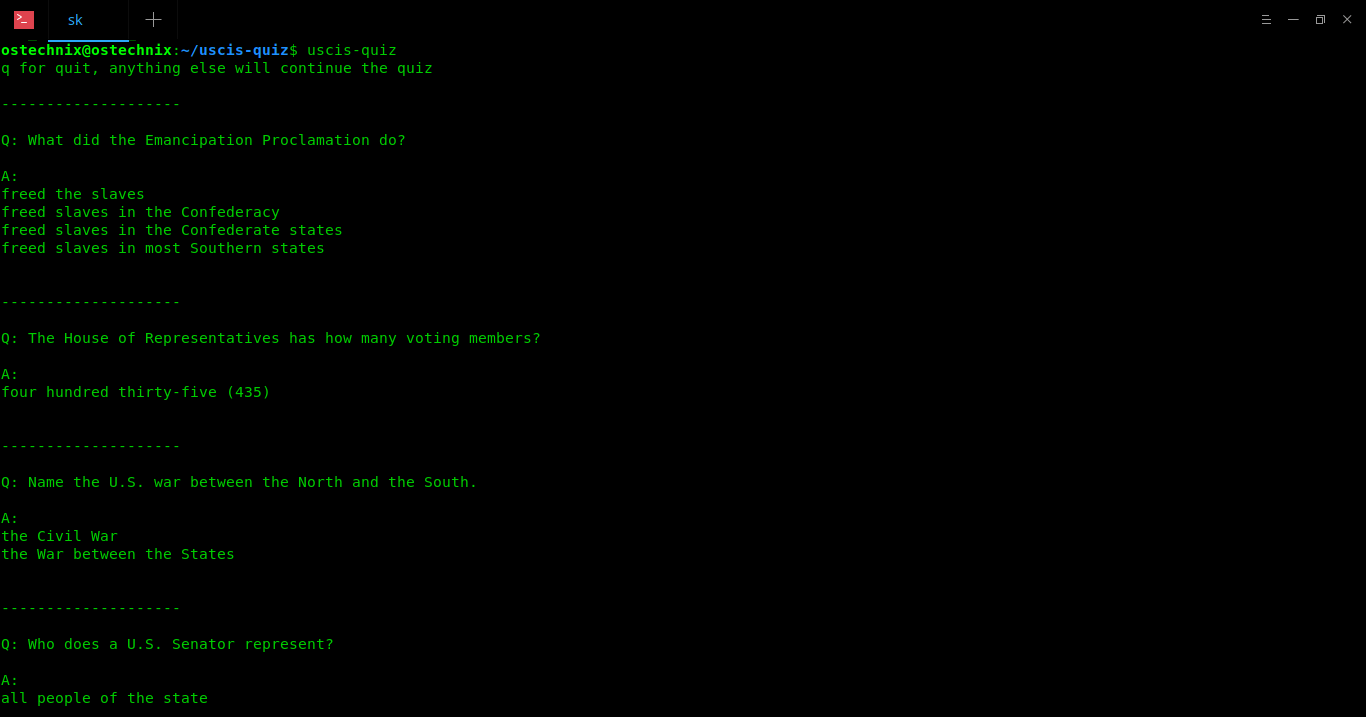 There is also official USCIS civics test app for Android and iOS users available from the links given below. Go get them and start preparing for the exam.

Android users, click the following image to install it.

The iOS users, click the following button to get it.

For complete details, refer this link to apply for the U.S Citizenship.

And, that's all for now. Hope this helps. More good stuffs to come. Stay tuned!

The fc Command Tutorial With Examples For Beginners

The Shuf Command Tutorial With Examples For Beginners

How To Archive Files And Directories In Linux...