Working from commandline is fun, fast, safe and also it is a recommended way to learn Linux.  Everyday, I spend so much time on all Linux forums, popular websites, and blogs in the pursuit of CLI alternatives to GUI applications. A while ago, I wrote about a few worth mentioning command line tools such as Translate Shell (a command-line google translator), cmus (commandline music player). Yesterday, I stumbled upon a commandline Twitter client called "Twitter CLI" or just "t". which allows us to tweet from Terminal. This is very cool application ever I have found lately. In this brief tutorial, let us see how to install and use Twitter commandline tool in Linux.

First, make sure you have Ruby installed on your system.

On DEB based systems such as Ubuntu, Linux Mint, the following command will install Ruby:

On RPM based systems such as RHEL, Fedora, CentOS, run:

This command will install 'Twitter CLI' tool along with all dependencies.

Just in case, you got an error something like below, You need to add ruby to your PATH variable. If not, just skip this part, and go to the Configuration section below.

In my case, I have added the following to my PATH:

To update the PATH changes, run:

Before you can use t, you'll first need to register an application with Twitter. Just follow the steps below: 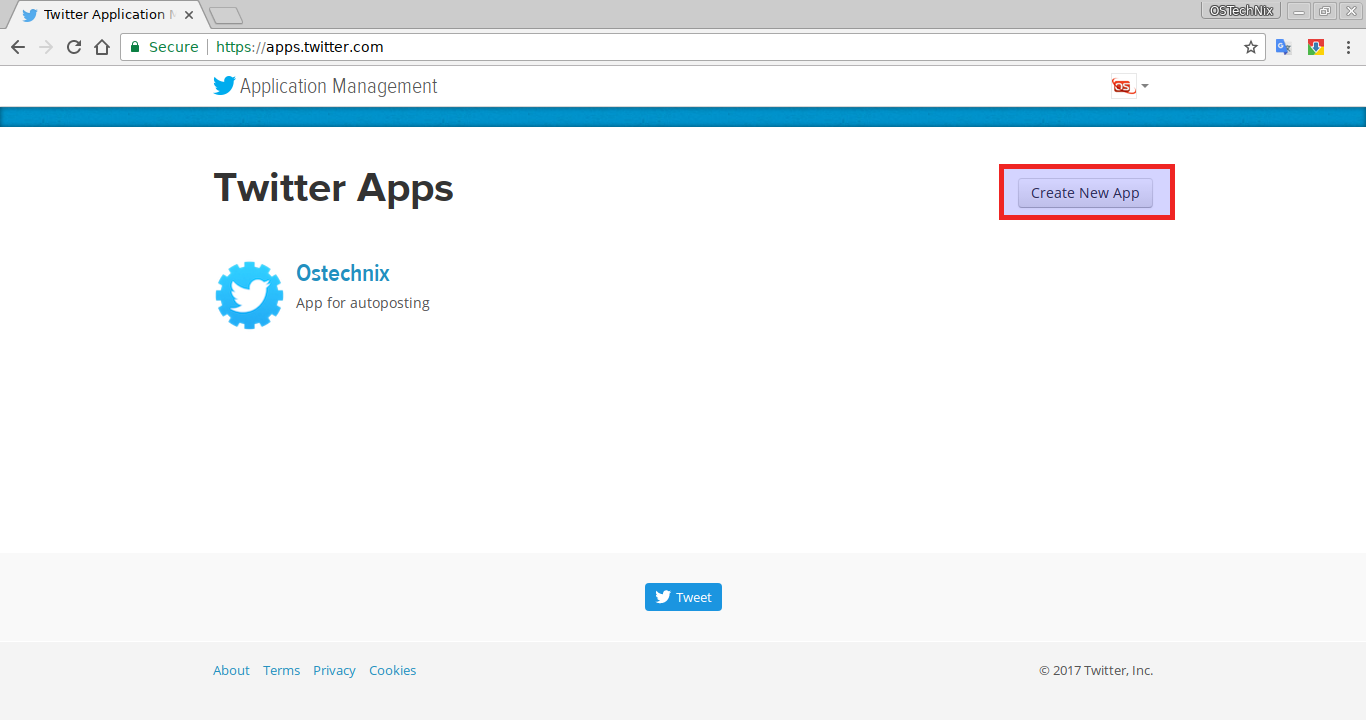 Fill up the required fields and submit the form. Please note that your application must have a unique name. Then, Go to the Permissions tab of your application, and change the Access setting to "Read, Write and Access direct messages". A mobile phone number must be associated with your Twitter account in order to obtain write privileges.

Go to the Keys and Access Tokens tab to view the consumer key and secret which you'll need to copy and paste when prompted. 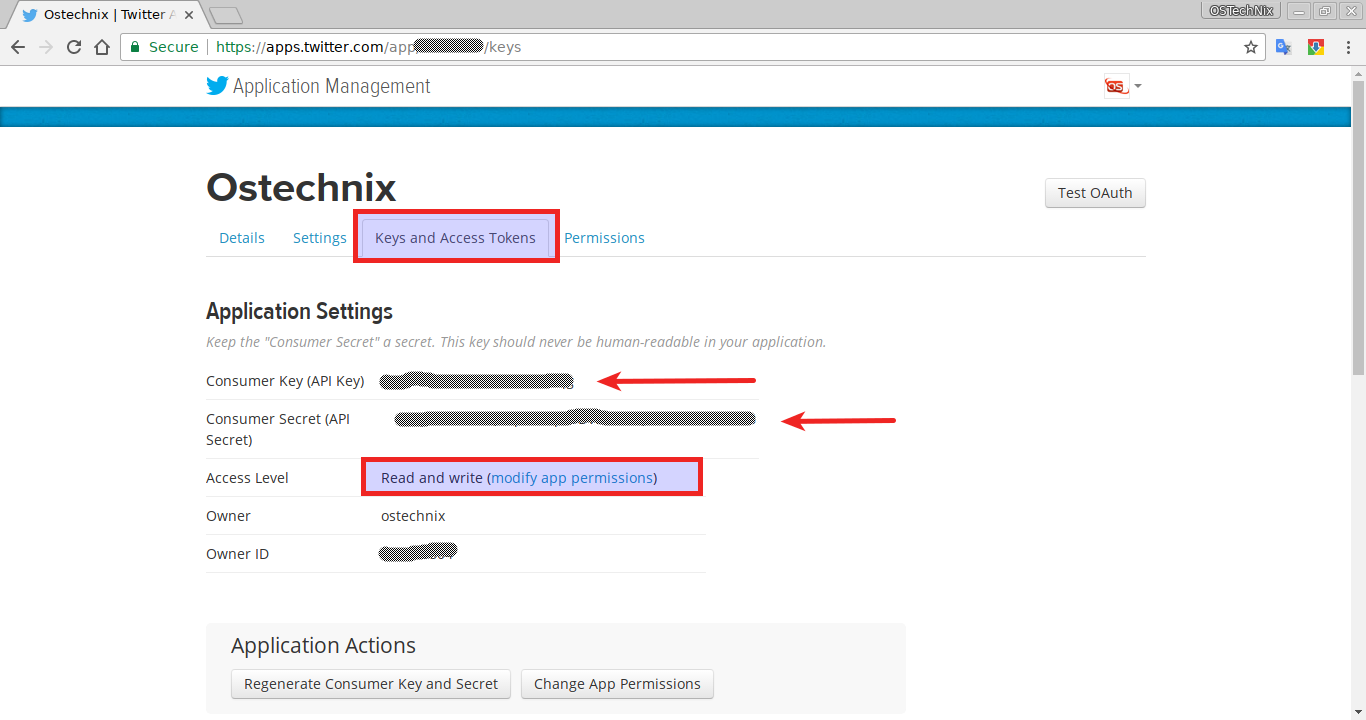 We have installed "t" and we have created and registered an application in Twitter. Now, we need to authorize this tool with our Twitter account. To do so, run:

You will see a dialog. Press ENTER key to open Twitter Developer site and copy/paste the the consumer key and secret keys when prompted.

Enter the correct API key and secret key of your application and press ENTER. Next Twitter app authorization page will open. Click "Authorize app" to continue. 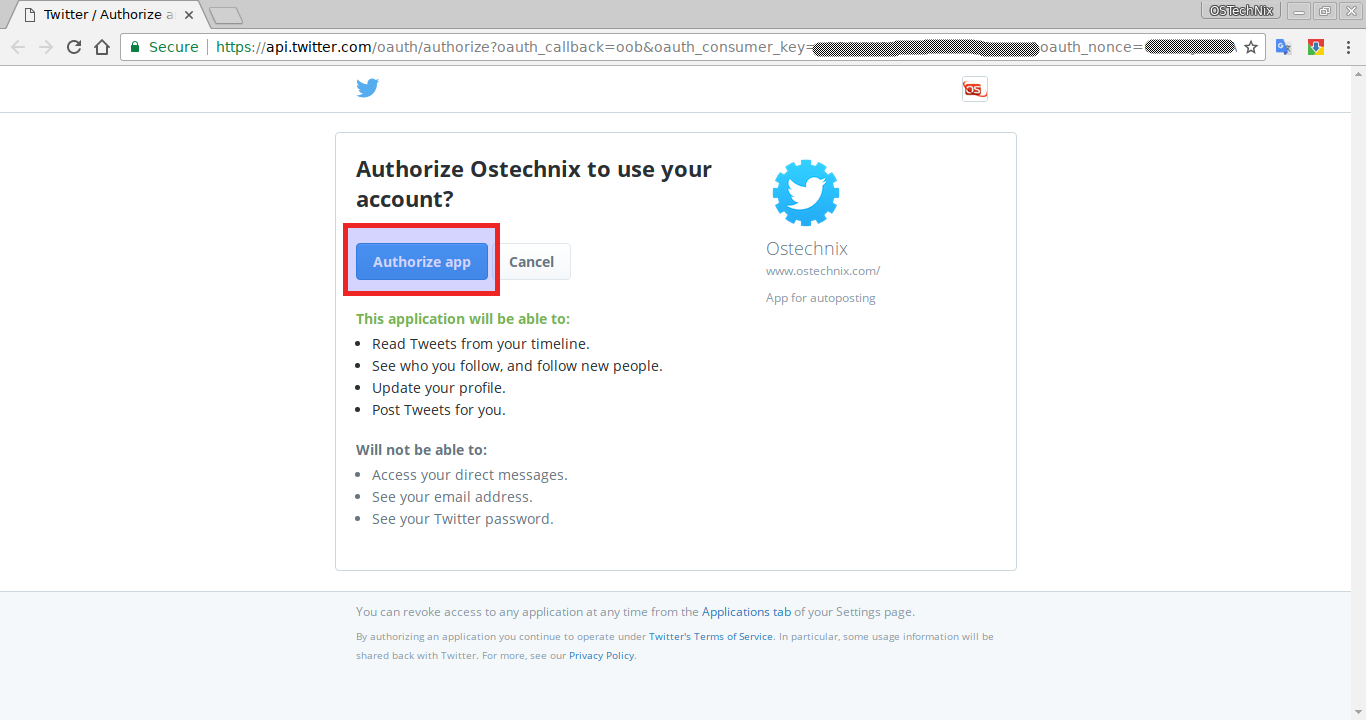 In the next window of your browser, you will see an Unique PIN. 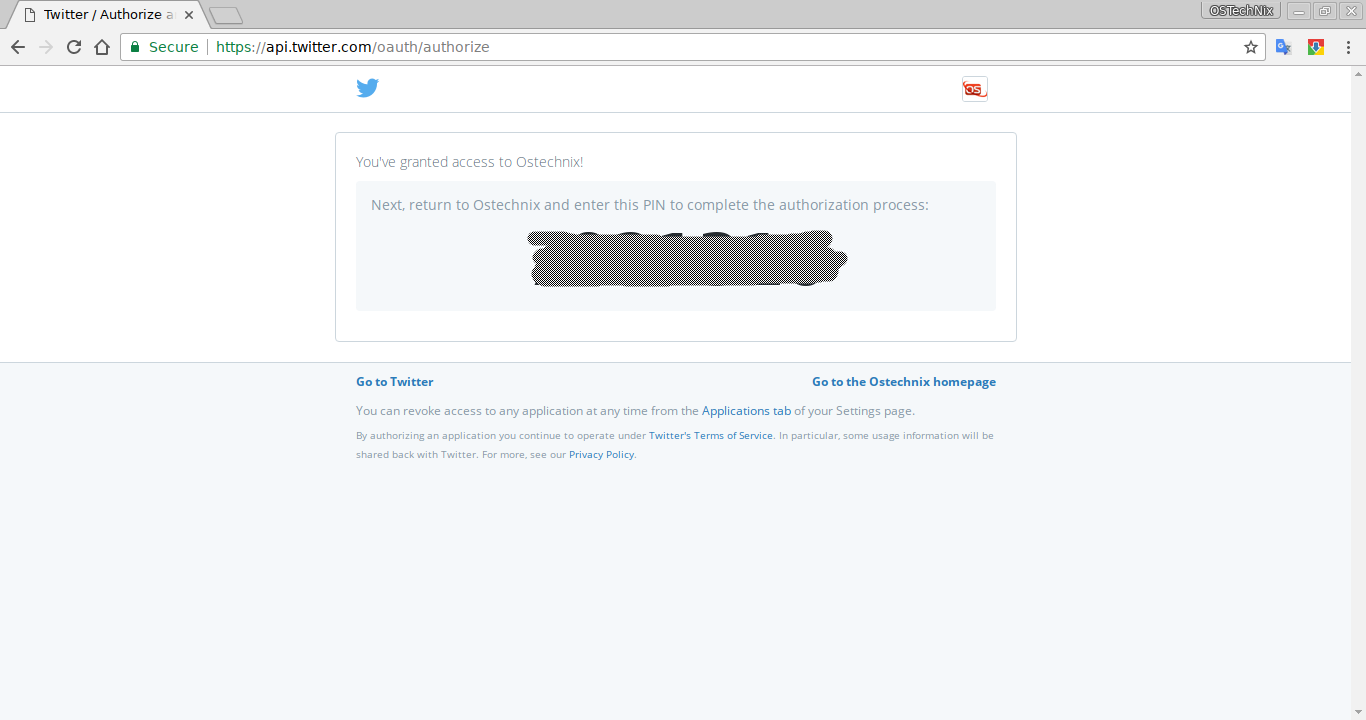 You need to copy this PIN and paste it in the Terminal prompt:

If you get "Authorization successful." message, congrats! You have successfully configured "t" with your Twitter account. To authorize multiple accounts, simply repeat the last step, signing into Twitter as a different user.

To view the list of all the accounts you've authorized, run:

As you see above, I have only one authorized Twitter account. If you have authorized more than one accounts, the last authorized account will be set as active.

All authorized account details will be stored in a file called YAML in ~/.trc file. You can view the accounts details at any time using command: 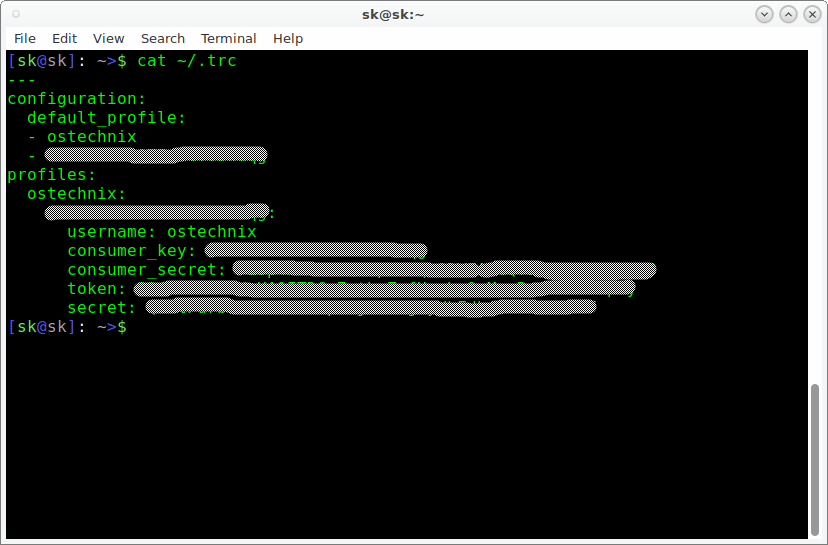 There it is. I have just tweeted a Mark Twain's quote from command line. Cool, isn't it?

The beauty of this tool is it will display how to delete your last tweet from the result itself. To delete the above tweet, I ran the following command:

It will ask you a confirmation. Just type 'y' and hit ENTER to delete the tweet.

It is simple as that.

To include special characters in your tweet, just wrap it with single quotes instead of double quotes, so those characters are not interpreted by your shell. If you use single quotes, your Tweet obviously can't contain any apostrophes unless you prefix them with a backslash \: Look at the following example:

To view an user's stats, run:

You can also view multiple users stats like below:

List all your friends, in long format, ordered by number of followers:

Favorite the last 10 tweets that mention you:

To start streaming your timeline, run:

To search Twitter for the 20 most recent Tweets that match a specified query:

The above command will list the recent 20 tweets that match a query "Linux".

Search Tweets mentioning you that match a specified query:

There are more options, but this is enough to getting started with Twitter from commandline.

I really enjoyed tweeting from commandline. This utility is really fast and useful for those who use commandline more than GUI environment. Give it a try, you won't be disappointed.

Well then, I leave you to get acquainted with this useful tool. I will go find more CLI alternatives to popular GUI applications and post them here from time to time. So, subscribe and bookmark our website to get daily updates about Open source, Technology, Linux and Unix related stuffs.

How To Easily Find Awesome Projects And Resources...

Great thank you :) Is there a way to publish an image, also ?
Somthing like : $ t update ‘I\’m tweeting from the command line. Isn\’t that special?’ –attached ‘path_to_the_local_file’