Just because Internet plans are getting cheaper every day, you shouldn't waste your bandwidth data by repeatedly downloading the same stuff over and over. The one fine example is downloading development version of Ubuntu ISO images. As you may know, Ubuntu developers releases daily builds, alpha, beta ISO images every few months for testing. In the past, I used to download those images whenever they are available to test and review each edition. Not anymore! Thanks to Zsync file transfer program. Now it is possible to download only the new parts of the ISO image. This will save you a lot of time and Internet bandwidth. Not just time and bandwidth, it will save you the resources on server side and client side.

Zsync uses the same algorithm as Rsync, but it will only download the new parts of a file that you have a copy of an older version of the file on your computer already. Rsync is mainly for synchronizing data between computers, whereas Zsync is for distributing data. To put this simply, the one file on a central location can be distributed to thousands of downloaders using Zsync. It is completely free and open source released under the Artistic License V2.

Zsync is available in the default repositories of most Linux distributions.

On Arch Linux and derivatives, install it using command:

And install it using command:

For other distributions, you can download the binary from the Zsync download page and manually compile and install it as shown below.

Please be mindful that zsync is only useful if people offer zsync downloads. Currently, Debian, Ubuntu (all flavours) ISO images are available as .zsync downloads. For example, visit the following link.

As you may noticed, Ubuntu 20.04 LTS daily build is available as direct ISO and .zsync file. If you choose .ISO version, you have to download the full ISO whenever the ISO gets new updates. But, if you download .zsync file, the Zsync will download only the new changes in the file. You don't need to download the whole ISO image every time.

A .zsync file contains a meta-data needed by zsync program. This file contains the pre-calculated checksums for the rsync algorithm; it is generated on the server, once, and is then used by any number of downloaders.

To download a .zsync file using Zsync client program, all you have to do is to run the following command:

If you already have the old image file on your system, Zsync will calculate the difference between the old and new file in the remote server and download only the new parts. You will see the calculation process as a series of dots or stars on your Terminal.

If there is an old version of the file that you're just downloading is available in the current working directory, Zsync will download only the new parts. Once the download is finished, you will get two images, the one you just downloaded and the old image with .iso.zs-old extension on its filename.

If there is no relevant local data found, Zsync will download the whole file. 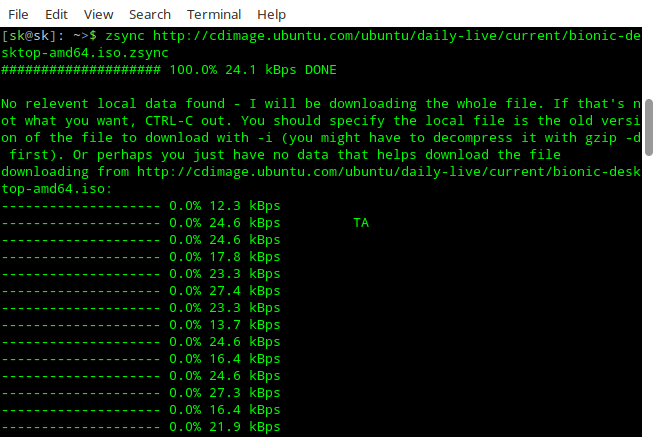 You can cancel the download process at any time by pressing CTRL-C.

Just imagine if you use the direct .ISO file or torrent, you will lose around 2.4GB bandwidth whenever you download new image. So, instead of downloading entire images (alpha, beta and daily build), Zsync just downloads the new parts of the ISO file that you already have a copy of an older version of it on your system.

Installing Skype On Linux Is Much Easier Now!

How To Downgrade A Package In Arch Linux

How To Install FFmpeg In Linux

How To Merge PDF Files In Command Line...