How To Create And Launch Ubuntu VMs With Multipass On Linux

There are multitude of programs and tools available for deploying Ubuntu VMs for testing and learning purposes. Some of them are Docker, LXD, LXC, Proxmox, VirtualBox and Vmware etc. I use Virtualbox often for testing various applications on multiple Linux distributions. Today, we are going to learn about yet another utility named Multipass. Whether you are a regular user or developer or system admin, you can create and launch Ubuntu VMs with Multipass instantly in a matter of seconds in Linux.

Multipass is a command line utility developed by Canonical team, for quickly deploying Ubuntu instances on your local machine. Since Multipass get you the up-to-date instances, you don't have to waste time on updates on launch! Using Multipass, you can launch Ubuntu VMs and use them for testing your code or application. You can run commands in VMs directly from your local host or log into the VM's shell and run from there. It is also possible to mount a directory of your host system into the instances and share files and folders between the host system and VMs. Multipass supports GNU/Linux, Mac OS and Windows.

Multipass is available as snap package, so it can be installed on any Linux operating systems that supports snapd. Snap comes pre-installed in all Ubuntu releases starting from version 16.04 LTS, Ubuntu flavours, Solus 3 and above, Zorin OS etc. On other Linux systems, you can install Snapd as described in this link.

Upon successful Multipass installation, you will see the following output:

Now let us go ahead and deploy Ubuntu instances in our local system.

Create And Launch Ubuntu VMs With Multipass On Linux

Running Ubuntu VMs with Multipass is incredibly easy and straight-forward.

To download and launch a fresh Ubuntu VM, simply run:

Here ostechnix-instance is the name of my Ubuntu VM. You can name the VMs as per your liking.

The above command will download a fresh and minimal Ubuntu instance and start it automatically.

By default, Multipass will download the current Ubuntu LTS version.

To list the currently downloaded VMs on your system, run:

As you can see in the above output, a new Ubuntu instance named "ostechnix-instance" is launched and is running with Ubuntu 18.04 LTS version. And the IP address of the instance is 10.39.86.203.

Multipass allows you to run commands inside your Ubuntu instances. For example, we can find the system details of a running VM using command: 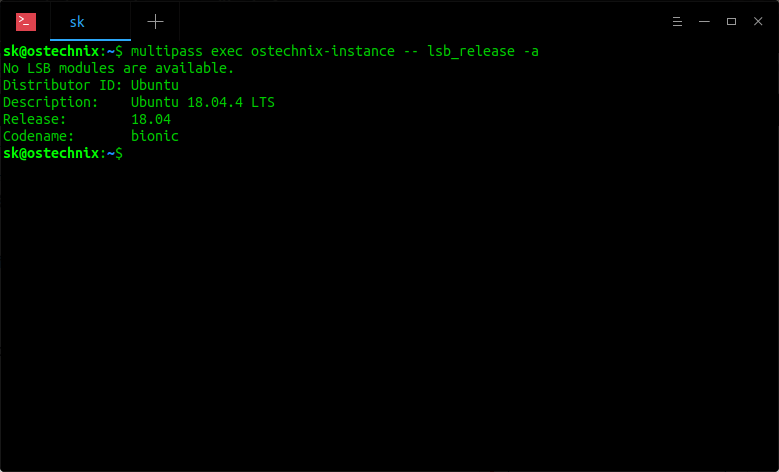 Instead of running commands from your local system to Ubuntu VM, you can directly launch its SHELL and run the commands or do any testing as you please. 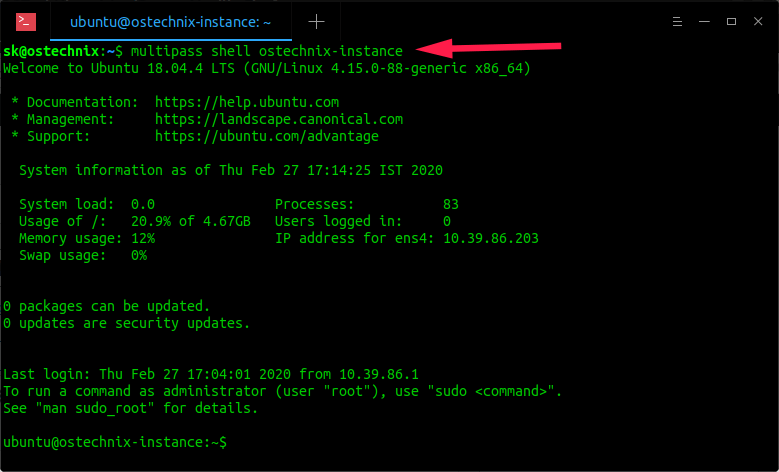 As I already said, Multipass will get you the current LTS version, which is Ubuntu 18.04. You can, however, launch other available VMs if you want to.

To launch any other instances, specify the image name like below.

This command will launch an instance running with Ubuntu 19.10.

By default, Multipass will create Ubuntu VMs with 1 CPU, 5GB hard disk and 1GB RAM. This is enough for basic testing. However, some times you might want to create a VM with lower or higher configuration than the default. It is also possible!

The following command will spin up a VM with 2 CPUs, 2 GB RAM and 20 GB hard disk size.

Find information of the running instances

The information about the running instances can be viewed by the following command:

To suspend a running instance, run:

Verify if it is suspended or not using info command:

As you can see, my ostechnix-instance is suspended.

To stop a running VM, run:

To start the VM:

If you are not comfortable with Multipass command line options, you can manager VMs from the Multipass tray icon.

Launch Multipass GUI from your host system's menu or dash. You will then see the Multipass icon on your system tray.

From the multipass tray icon, you can:

Once you are done with your Ubuntu instances, you can delete them if they are no longer required.

First stop the VM that you want to delete.

Then, delete it from your local host using commands:

Run the following command to view the list of available options and sub-commands along with description.

To view the help section for each sub-command:

How To Search DuckDuckGo From Commandline Using ddgr

How To Securely Share Files Over Internet With Firefox Send

How To Restore Or Recover Deleted Commands In...

Fix “Implementation of the USB 2.0 controller not...

How To Save Linux Commands And Use Them...

Looks like a very cool utility. I installed it on Fedora 31 but ran into a weird socket read/write issue. I’ll keep looking on the ‘net for possible solutions to that error.

What’s the difference from LXC/D?

Not much. As far as I observed, Multipass is meant to offer a universal Ubuntu experience across platforms other than Linux.It supports Linux, Mac OS and Windows.Please have a look at this this thread for detailed discussion. https://forum.snapcraft.io/t/reasoning-behind-the-move-to-multipass/9648/4

Because the Multipass daemon runs as root, only privileged users can connect to it. The “sudo”, “adm” and “admin” groups are tried, in that order.

Make sure you’re in the group that the socket is read/writable to.

Primarily, it’s dealing with virtual machines, not containers. But LXD is actually growing its support for that as well (and Multipass will support using LXD on Linux rather than running its own QEMU). LXD won’t work natively on Windows or macOS, though 🙂

Thank you for your clarification, Saviq.

Great write up! Multipass makes it so easy to spin up a vm and run tests without worrying about losing any work.

Reply Retweet Favorite
How To Fix "Implementation of the USB 2.0 controller not found!" VirtualBox Error In Linux #Virtualbox… https://t.co/1K0c4gg8bp

Reply Retweet Favorite
Nobody will ever understand the joy of a programmer. 😃 #Code #Developer #programming #Fun https://t.co/hbeG2WIorA