3 CLI Image Viewers To Display Images In The Terminal

FIM stands for Fbi IMproved. For those who don't know, Fbi is a linux framebuffer imageviewer. It uses the system’s framebuffer to display images directly from the command line. By default, it displays bmp, gif, jpeg, PhotoCD, png, ppm, tiff, and xwd from the Terminal itself. For other formats, it will try to use ImageMagick's  convert. The FIM utility draw my attention, because it is very lightweight compared to most GUI picture viewer applications.

FIM is based on Fbi and it is a highly customizable and scriptable image viewer targeted at the users who are comfortable with software like the Vim text editor or the Mutt mail user agent. It displays the images in full screen and the images can be controlled (such as resize, flip, zoom) using keyboard shortcuts. Unlike fbi, the FIM utility is universal. It can open many file formats and it can display pictures in the following video modes:

The FIM image viewer is available in the default repositories of DEB-based systems such as Ubuntu, Linux Mint. So, you can install fbi using command:

If it is not available in the default repositories of your Linux distribution, you can download, compile and install from source as described in the section titled "Download and build instructions" in official documentation page.

Once installed, you can display an image with "auto zoom" option using command:

Here is the sample output from my Ubuntu box.

As you can see in the above screenshot, FIM didn't use any external GUI picture viewers. Instead, it uses our system's framebuffer to display the image.

If you have multiple .jpg files in the current directory, you could use wildcard to open all of them as shown below.

To open all images in a directory, for example Pictures, run:

We can also open the images recursively in a folder and its sub-folder and then sorting the list like below.

To render the image in ASCII format, you can use -t flag.

You can use various keyboard shortcuts to manage the images. For example, to load next image and previous images, press PgUp/PgDown keys. Ton Zoom in or out, use +/- keys. Here is the common keys used to control images in FIM.

Viu is yet another command line application to view images from the Terminal. It is free, open source CLI image viewer written using Rust programming language. Using Viu we can;

Since Viu is written in Rust, we can install it using Cargo package manager. After installing Rust in your Linux box, run the following command to install Viu.

On Arch Linux and its derivatives, It can be installed from AUR using any AUR helper programs like Yay.

Viu is also available as per-compiled binary. Download the latest binary from the releases page. As of writing this, the latest version was 0.2.1.

After downloading the Viu binary file, make it executable:

And, move it to your path, for example /usr/local/bin. 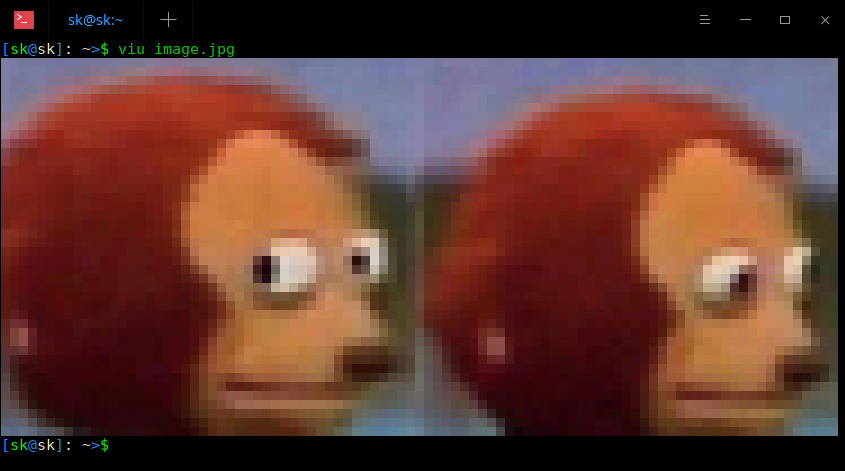 You can even display custom dimension image using -h (Height) or -w (Width) flags like below. 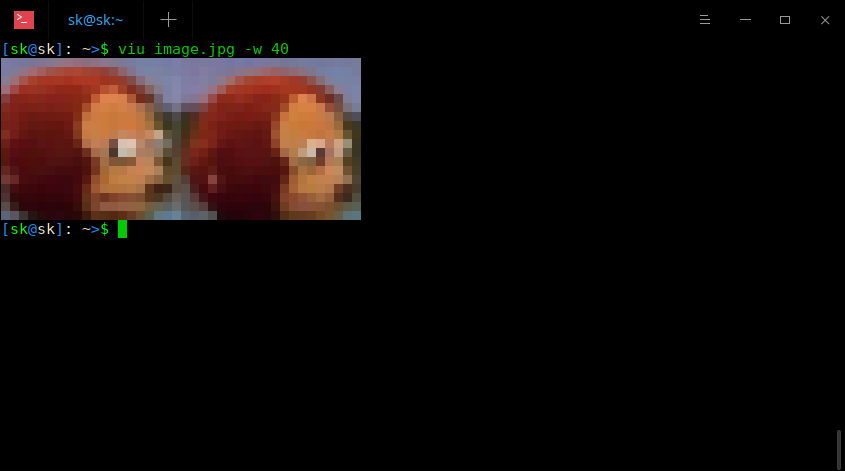 To display multiple images one after another in a folder, use wildcard characters like below.

Like I already mentioned, Viu is capable of displaying different format images. For example, the following command will display the gif image using Viu:

It is also possible to display the image hosting sites, for example Giphy, in Terminal like below.

For more details about Viu, refer the help section by typing the command:

Unlike the previous two image viewers, Lsix will only display thumbnails in Terminal. It is like ‘ls’ command in Unix-like systems, but for images only. Lsix is a simple BASH script to view thumbnail images in Terminal using Sixel graphics. For more details about this script, please click the following link.

And, that's all for now. If you use/know any other CLI image viewers, please mention them in the comment section below. I will check and update the guide.

I use qiv, works great, and very flexible.

I just installed the pre-compiled binary for viu onto my own Ubuntu installation. Thank you. Excellent tool. So simple.

Good to hear, Chris! Thank you.

I also find feh very useful. Can display images full screen. Will display all the images in directories recursively. You can give it a text file containing a path names to images. I’ve got 450,000 images listed in a text file and it will display them almost instantly. It will even randomize or sort the list in less than a second.

I use sxiv, and I love it because it’s very customizable. I’m gonna make a script to use it everywhere with a shortcut, with some options predefined.