How To Record Terminal Sessions As SVG Animations In Linux

Today, we are going to see yet another tool to record the Terminal activities. Say hello to "Termtosvg". As the name implies, Termtosvg records your Terminal sessions as standalone SVG animations. It is a simple command line utility written in Python programming language. It generates lightweight and clean looking animations embeddable on a project page. It supports custom color themes, terminal UI and animation controls via SVG templates. It is also compatible with asciinema recording format. Termtosvg supports GNU/Linux, Mac OS and BSD OSes.

And, install the following prerequisites to render the Terminal screen.

Done. Let us go ahead and generate Terminal sessions in SVG format.

Note: If you termtosvg command is not available, restart your system once.

You will see the following output after running 'termtosvg' command:

You will now be in a sub-shell where you can execute the Linux commands as usual. Everything you do in the Terminal will be recorded.

Let me run a random commands.

Once you're done, press CTRL+D or type exit to stop recording. The resulting recording will be saved in /tmp folder with a unique name. 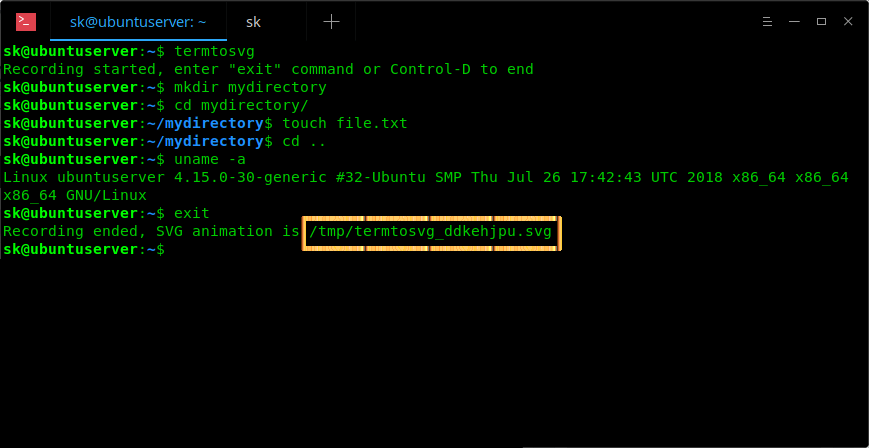 You can then open the SVG file in any web browser of your choice from Terminal like below.

You can also directly open the SVG file from browser (File -> <path-to-svg>).

Here is the output of the above recording in my Firefox browser.

Here is some more examples on how to use Termtosvg to record Terminal sessions.

Like I mentioned already, Termtosvg will record a terminal session and save it as an SVG animation file in /tmp directory by default.

However, you can generate an SVG animation with a custom name, for example animation.svg, and save it in a custom location, for example /home/sk/ostechnix/.

Record a terminal session and render it using a specific template:

Record a terminal session with a specific screen geometry:

Render an SVG animation from a recording in asciicast format:

How To Switch Between Different Versions Of Commands In Linux

Kerala Needs Your Help – Here’s How You Can Help

How to Generate Enough ‘Entropy’ For GPG Key...

How To Setup Firewall With UFW On Linux