How To Monitor File Changes Using fswatch In Linux

Fswatch is a free, open source multi-platform file change monitor utility that notifies us when the contents of the specified files or directories are modified or changed. Using fswatch, we can easily monitor the changes being made in files and/or directories. It supports all operating systems, including GNU/Linux, *BSDs, Mac OS X, Solaris, and Microsoft Windows etc. In this brief guide, let me show you how to monitor file changes using fswatch in Unix-like operating systems.

Concerning about the features of fswatch, we can list the following:

Since the fswatch utility is not available in the default repositories of most Linux distributions, you need to manually compile and install the latest version from the source as described below.

Go to the project's folder:

Finally, compile and install fswatch by running the following commands one by one.

Finally, run the following command to refresh the links and cache to the dynamic libraries:

If you don't run the above command, you might get the following error in GNU/Linux systems.

To test how fswatch works, open two Terminal windows (Let us call them Terminal 1 and Terminal 2).

In Terminal 1, run the fswatch command to monitor the $HOME directory.

And, in the Terminal 2 do some operations such as creating files/folders, deleting files, modifying files etc.

Whatever you do in the terminal 2 will be notified on the Terminal 1. Have a look at the following screenshots.

Terminal 1 - fswatch command is running and the file changes are being monitored: 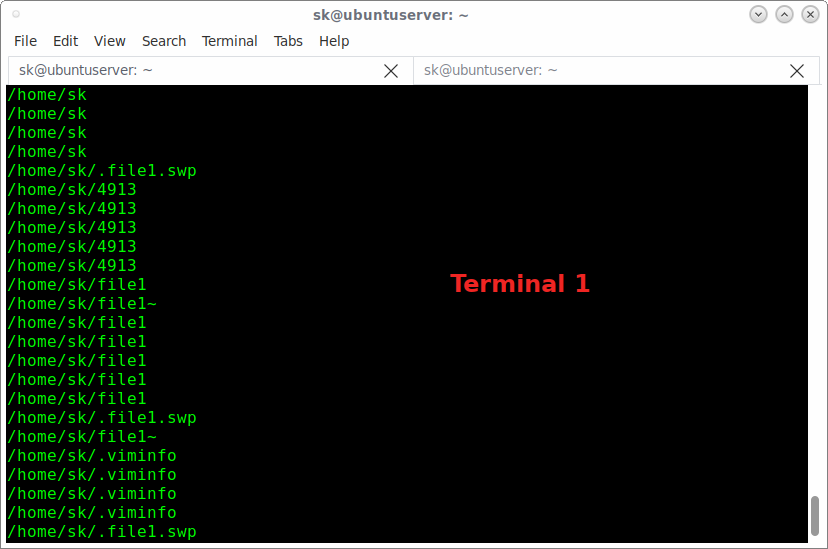 Terminal 2 - Do some random changes in files/folders: 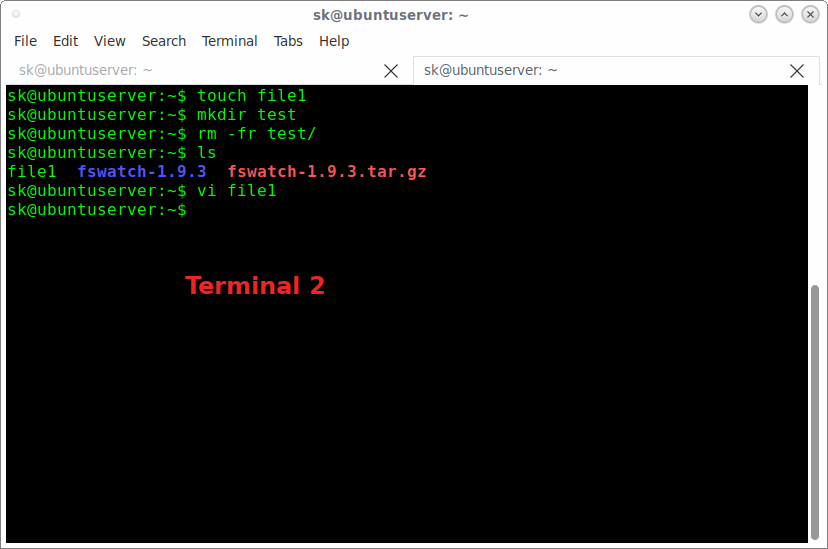 Do random changes in files or folders

By default fswatch will choose the best monitor available on the current platform, in terms of performance and resource consumption. In Linux, the default monitor is inotify.

To list the available monitors in the current platform (i.e Linux in our case), run:

To monitor a specific file or directory with a particular monitor option, run:

By default, fswatch will keep monitoring the file changes until you manually stop it by invoking CTRL+C keys.

You can also exit fswatch after the first set of events is received by specifying the option -1 as shown in the following command:

This command will exit just after the first set of events is received.

fswatch will monitor changes in all files/folders in the specified path. If you want to watch the changes made in the directories only, use -d option.

Of course, there are more options. Refer the man pages or the project's documentation page for detailed instructions.

How To Exclude Specific Directories From Copying In Linux

dtrx – The Universal Archive Extractor For Many Archive Types

Can this send an email when it detects that a file changed?

Not directly. The UNIX way of live is to have multiple small utilities work together in order to solve a task. Hence, you could run ‘mail’ whenever fswatch exists.

Hi this one Update
wget https://github.com/emcrisostomo/fswatch/releases/download/1.12.0/fswatch-1.12.0.tar.gz