How To Run MS-DOS Games And Programs In Linux

Do you want to try some good-old MS-DOS games and defunct C++ compilers like Turbo C++ in Linux? Good! This tutorial will teach you how to run MS-DOS games and programs in Linux using DOSBox. It is an x86 PC DOS-emulator that can be used to run classic DOS games or programs. DOSBox emulates an Intel x86 PC with sound, graphics, mouse, joystick, and modem etc., that allows you to run many old MS-DOS games and programs that cannot be run on modern operating systems, such as Windows XP and later, Linux and FreeBSD. It is free, written using C++ programming language and distributed under GPL.

DOSBox is available in the default repositories of most Linux distributions.

On Arch Linux and its variants like Manjaro Linux, run:

There is no initial configuration required to use DOSBox and it just works out of the box. The default configuration file named dosbox-x.xx.conf exists in your ~/.dosbox folder. In this configuration file, you can edit/modify various settings, such as starting DOSBox in fullscreen mode, use double buffering in fullscreen, set preferred resolution to use for fullscreen, mouse sensitivity, enable or disable sound, speaker, joystick and a lot more. As I mentioned earlier, the default settings will work just fine. You need not to make any changes.

To launch DOSBox, run the following command from the Terminal: 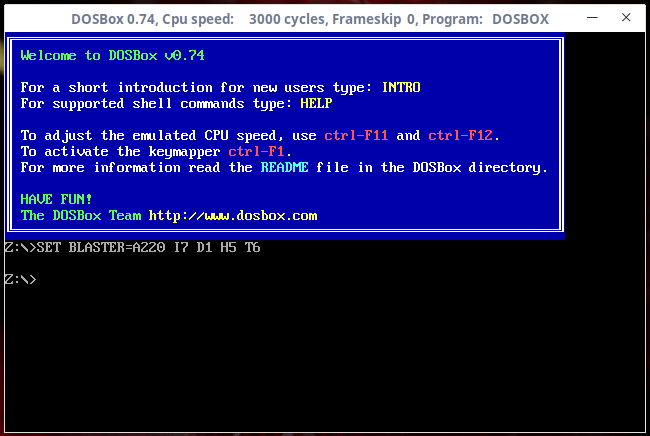 As you can see, DOSBox comes with its own DOS-like command prompt with a virtual Z:\ Drive. So if you're familiar with MS-DOS, you wouldn't find any difficulties when working in DOSBox environment.

Here is the output of dircommand (Equivalent of ls command in Linux)  output: 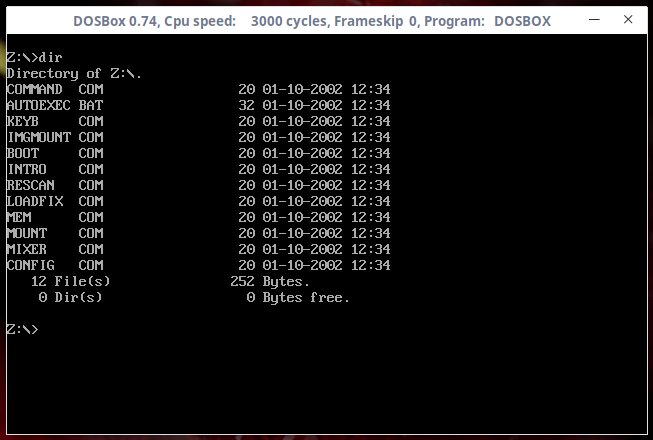 If you're a new user and it is the first time you use DOSBox, you can view the short introduction about DOSBox by entering the following command in DOSBox prompt:

Press ENTER to go through next page of the introduction section.

To view the list of most often used commands in DOS, use this command:

To view list of all supported commands in DOSBox, type:

Remember, these commands should be used in the DOSBox prompt, not in your Linux Terminal.

DOSBox also supports a good set of keyboard bindings. Here is the default keyboard shortcuts to effectively use DOSBox. 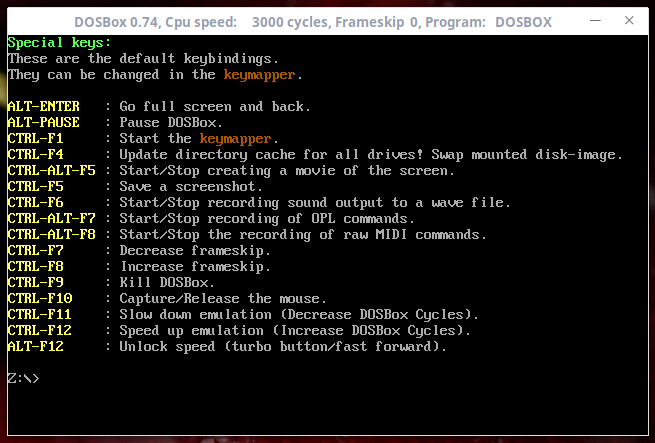 To exit from DOSBox, simply type and hit ENTER:

By default, DOSBox starts with a normal window-sized screen like above. To start dosbox directly in full-screen window, edit your dosbox-x.xx.conf file and set the value of fullscreen variable as enable. Now, DosBox will start in full-screen mode. To go back to normal screen, press ALT+ENTER.

Hope you learned the basic usage of DOSBox.

Let us go ahead and install some DOS programs and games.

For the purpose of this guide, let me show you how to install Turbo C++ program and Mario game.

First, we will see how to install Turbo.

And mount the ~/dosprograms directory as virtual drive C:\ in DOSBox. 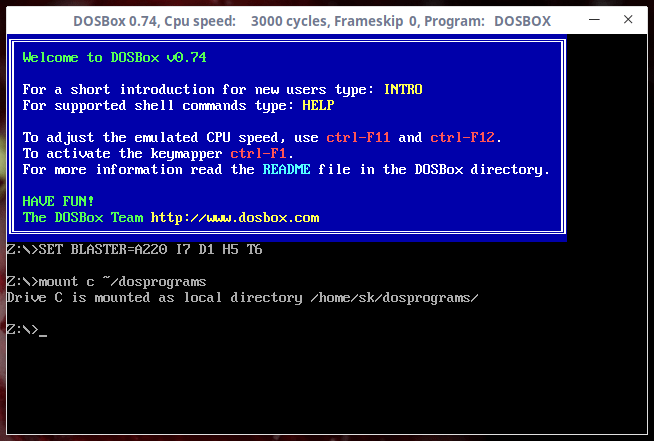 And then, switch to tc/bin directory: 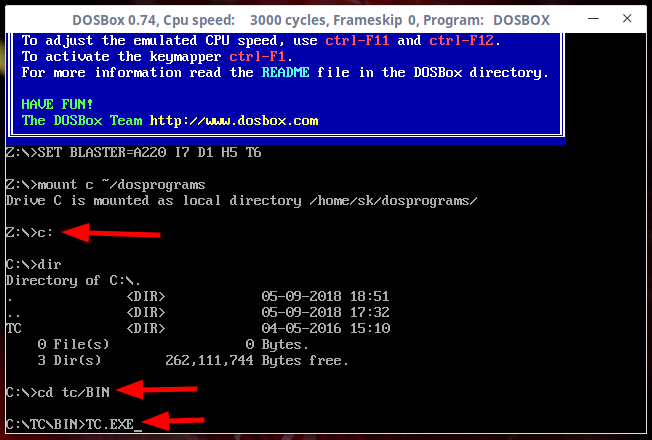 You will now be in Turbo C++ console. 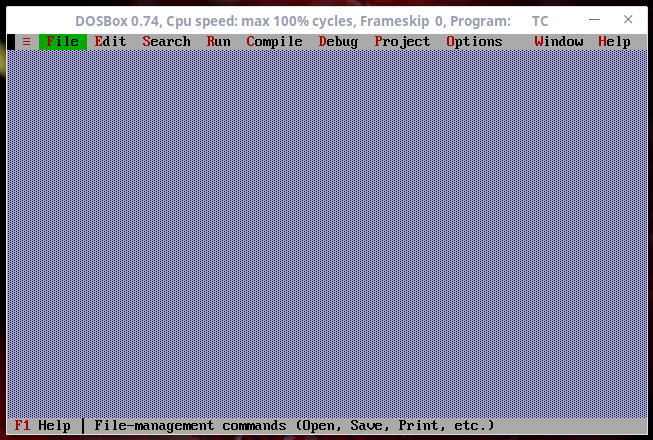 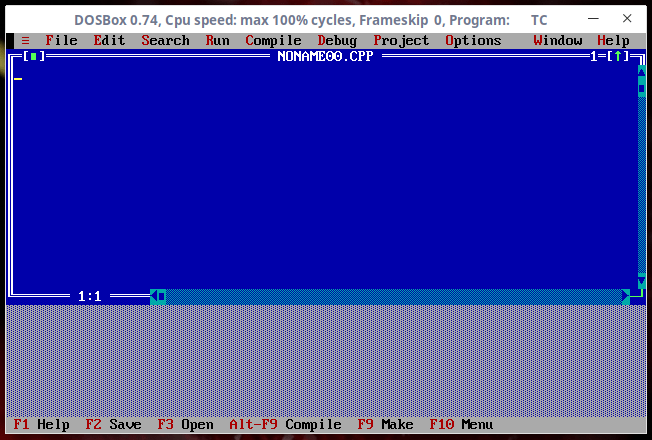 Similarly, you can install and run other classic DOS programs.

You might be encountered with following error while running turbo c++ or any other dos programs:

To fix this, edit your ~/.dosbox/dosbox-x.xx.conf file:

Find the following variable and change its value from:

Save and close the file. Now you can be able to run the dos programs without any problems.

Now, let us see how to run a dos-based game, for example Mario Bros VGA.

Download Mario game from here and extract the contents in ~/dosgames directory in your Linux machine.

At the DOSBox prompt, run the following command to mount ~/dosgames directory as virtual drive d.

And then go to mario game directory and run the mario.exe file to launch the game. 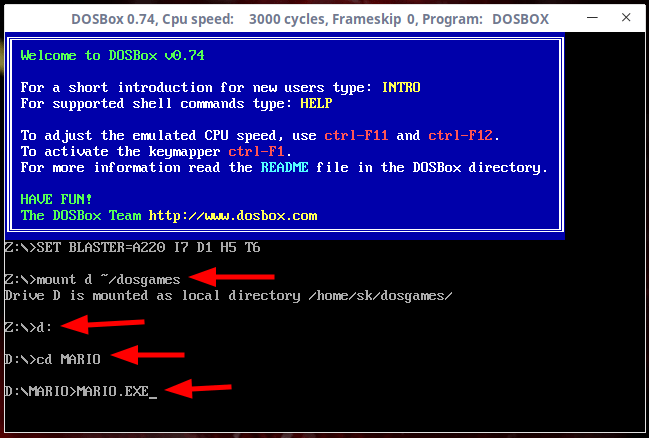 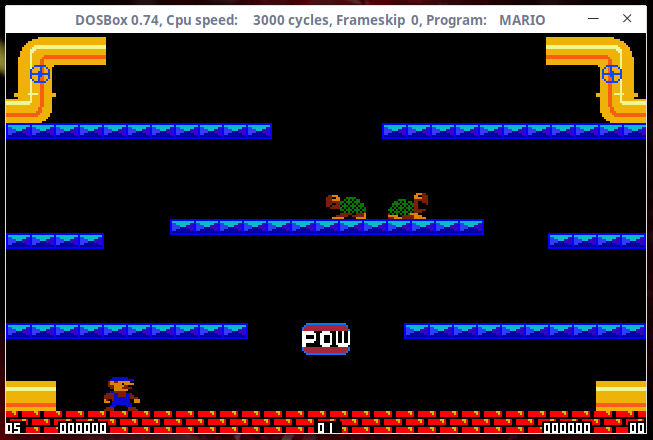 Similarly, you can run any dos-based games as described above. You can view the complete list of supported games that can be run using DOSBox here.

DOSBOX is not a complete replacement for MS-DOS and it lacks many of the features found in MS-DOS. However, it is just enough to install and run most DOS games and programs.

How To Limit Network Bandwidth In Linux Using Wondershaper

How To Enable Minimize And Maximize Buttons In...

How To Enable Nested Virtualization In KVM In...

How To Synchronize Local And Remote Directories In...

DOSEmu is also a must.
It runs games who DOSBox can’t (although without or with poor quality sound).