Terminal Phase – A Space Shooter Game That Runs In Terminal

Today, I came across an interesting CLI game called Terminal Space, a space shooter game that runs in your Terminal. It is somewhat similar to a mobile game named Space Impact that usually came bundled with several old Nokia phones. I have played Space Impact game on my Nokia basic model phone several years ago. It was really interesting and addictive game. If you've played Space Impact, Terminal Space might look very familiar. It is an open source project released under GPLv3 and is written in Racket programming language. In this brief guide, I am going to show you how to install and play Terminal Phase space shooter game in Terminal on Linux.

Since Terminal Phase is written in Racket, you need to install it on your Linux box. If you haven't installed it yet, follow the steps given in this link.

Done! Let us go ahead and see how to play this game.

To start Terminal Phase, just type the following command in the Terminal and hit ENTER:

You should see the Terminal Phase main menu screen. 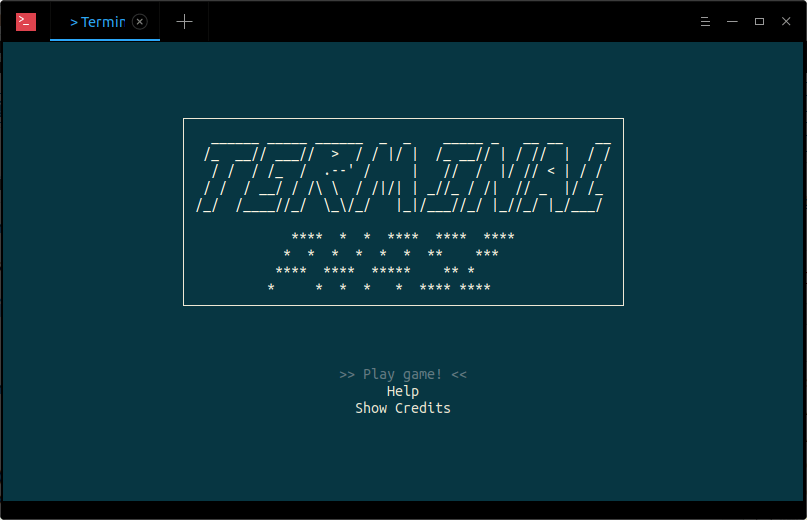 As you can see, there are three options. Use UP/DOWN arrow keys to select any option and hit ENTER to open it. Hit ENTER again to go back to the main menu.

Choose "Play game!" option from the main menu and hit ENTER key to start the game.

The greater-than (>) symbol is our player. You shouldn't let the player to hit the walls, the asterisks of course. You need to shoot the objects (random letters) coming towards you by pressing the SPACEBAR key to collect the rewards and go to the next levels. Also don't get shot by the enemies, the less-than sign (<). These little buggers will keep coming and shooting at you. Just don't get shot by them. Use arrow keys to move the player in any direction. You are given 3 lives in total. After you lost all 3 lives, the game is over!  Press q to stop and press it again to quit the game. The total number of lives, levels, current score and highest score will be shown in the bottom.

Here is a short video demonstration.

I am not really a gaming person. I played this game for couple minutes and quite liked it. I hope you will like it as well.

This game is in the early-development stage. I hope the developers will add more levels, enemies and bosses in the upcoming releases.

Also the developer has released a video showing a live playthrough and how to make levels and how the code works. If you're interested to more about this game, please watch it.

How To Find And Delete Broken Symlinks In Linux

A Collection Of Puzzle Games To Make Your...